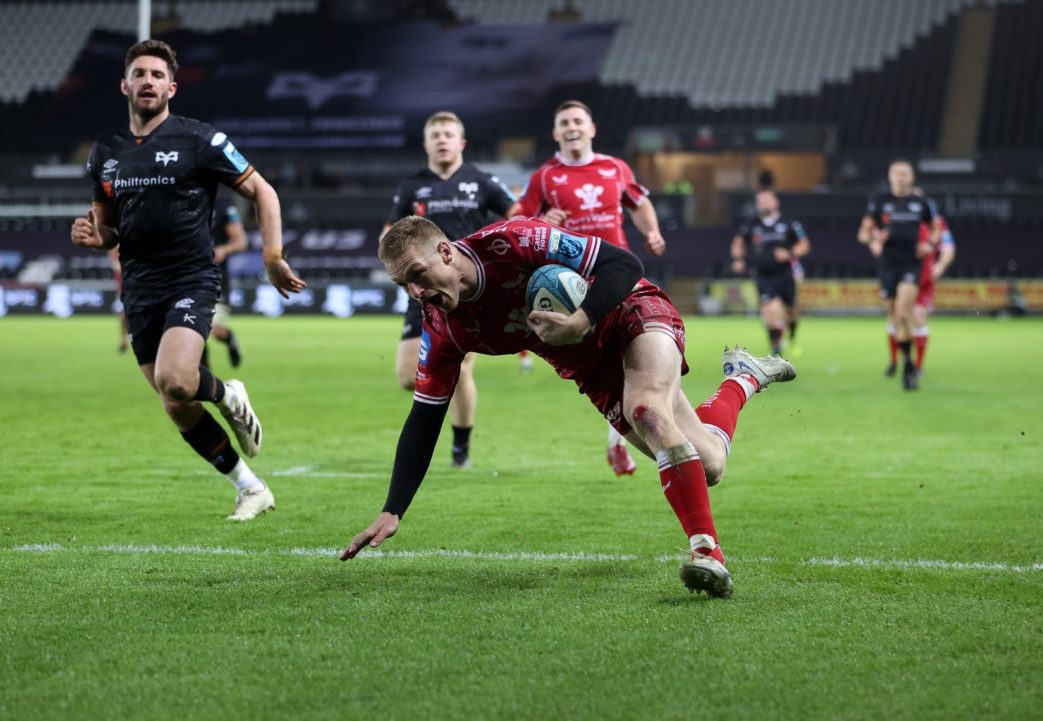 Fourteen-man Scarlets battled hard, but went down to a 34-14 derby day defeat to the Ospreys in Swansea.

Back-rower Tomas Lezana was shown red for a ‘head on head’ challenge in the fifth minute, which left the West Walians up against it for the remainder of a bruising Boxing Day BKT URC contest.

Scarlets had been forced into a reshuffle prior to kick-off. Sam Lousi was withdrawn following the birth of his second child so Sione Kalamafoni moved to second row, Tomas Lezana came in at openside and Josh Macleod switched across the back row to No. 8.

After a breathless opening four minutes came the defining decision of the game.

The officials spotted a clash of heads between Rhys Davies and Lezana and following replays referee Evans showed the Argentinean flanker a straight red.

That led to a concerted period of home pressure and the one-man advantage eventually brought its rewards when wing Alex Cuthbert pounced wide out on 15 minutes. Ospreys added a second eight minutes later with left wing Luke Morgan sliding in at the corner after smart work from Owen Williams, who added the extras.

It needed a superb cover tackle from Vaea Fifita to deny Morgan a second, then it was Owen Williams who saw yellow for a high challenge on Sam Costelow, which saw the fly-half replaced by Rhys Patchell.

That provided the spark the Scarlets needed and from a short-range line-out attack, Kalamafoni showed his power to barge his way through the Ospreys defensive wall for the try.

Patchell converted to reduce the arrears to just five points, but it was the home side who had the final word of the half when scrum-half Rhys Webb spotted space around the ruck and raced to the posts for a fine solo score, which he also converted.

The Scarlets started the second period brightly with Kalamafoni held up over the line from an attacking scrum.

They were right back in it on 49 minutes with full-back Johnny McNicholl intercepting a pass from Webb around the halfway mark before showing superb pace to glide around Michael Collins for the try.

Patchell – on as a permanent replacement for Costelow – converted and it was the Scarlets voices in the crowd you could hear.

But it was the Ospreys who finished the stronger with an Owen Williams penalty extending the lead before tries from replacement hooker Sam Parry and centre Kieran Williams put a gloss on the final scoreline.