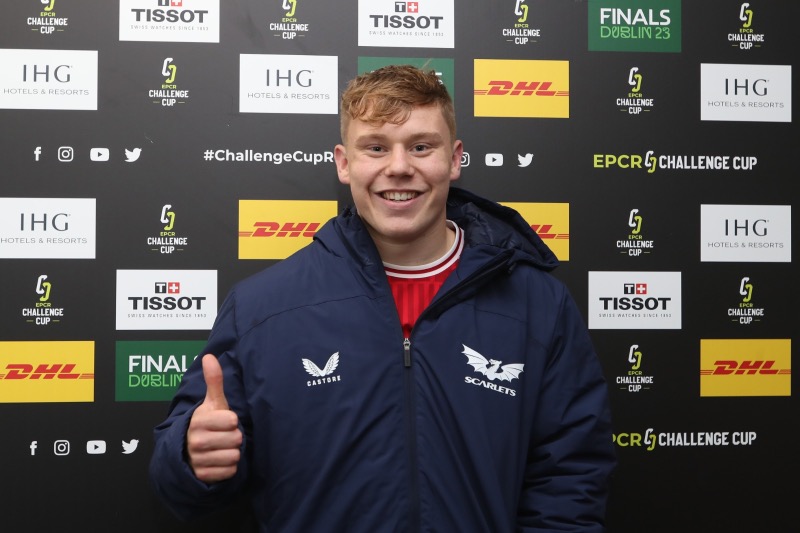 It’s been a momentous few weeks in the rugby life of young Sam Costelow. His fine early season form in the BKT United Rugby Championship saw the Scarlets fly-half named in Wales’ squad for the autumn internationals – but that was just the start of it.

The late withdrawal of team-mate Leigh Halfpenny from the campaign opener against New Zealand saw Costelow drafted onto the bench amid an eleventh hour reshuffle.

Then, 67 minutes into the game, came his big moment as he took the field at the Principality Stadium to make his Wales debut – versus the mighty All Blacks!

A second cap followed in a replacement role as a Test career was launched.

Next up was an eventful trip to South Africa to link up with the Scarlets in time to start the BKT URC clash with the Emirates Lions in Johannesburg, only for him to pick up a yellow card which meant he was facing a likely suspension on the totting up factor having been sin binned twice before this season.

Yet the card was subsequently overturned, so he was free to wear No 10 in Sunday’s EPCR Challenge Cup tie at home to Bayonne and he proceeded to deliver a Player of the Match performance in a much-needed 39-7 win.

It was further evidence of the talent of the 21-year-old from Pencoed, who spent a couple of seasons with Leicester before returning to Wales.

However, he was quick to pass the plaudits on to those around him.

“As a team, we spoke a lot beforehand about having a bit of hwyl, a bit of heart,” he said.

“The forwards really showed up and it makes our job as half-backs a lot easier when those boys are going forward. The boys outside me were talking well too. They were really good. It means I can just concentrate on doing my role. I’m happy, it was a good day.

“I thought our attack was good. We have still got to go forward now, myself included. A couple of passes weren’t that accurate. We’ve just got to keep putting our foot on the throat and keep working hard. It’s a good start in the competition. We’ve got to back it up again next week now.”

Giving his thoughts on Costelow’s display, Scarlets head coach Dwayne Peel said: “He’s a good player, isn’t he? He was disappointed last week with the yellow card and a few missed kicks, but his kicking was really good in this game and he controlled matters well.”