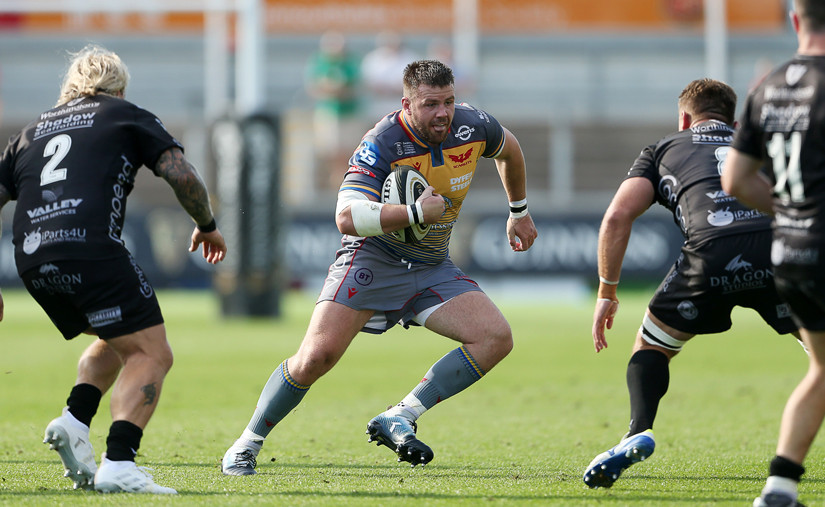 A strong first-half Dragons display proved enough to secure the spoils and the Worthington Challenge Trophy at Rodney Parade. In their second pre-season outing of the campaign, Scarlets found themselves on the back foot early and despite enjoying plenty of possession and territory, trailed 22-0 early in the second half. An improved second-half showing saw Dan Jones, Corey Baldwin and Tomi Lewis cross for tries, but the Men of Gwent ran out deserved winners. The Scarlets, bolstered by the return of Wales internationals Rob Evans, Samson Lee and Steff Evans would have been disappointed with the amount of errors they made in a disjointed opening period. With their scrum on top, they enjoyed plenty of ball and time in home territory, but the Dragons defence proved stubborn. The home side were up and running after just four minutes thanks a fine solo try from wing Ashton Hewitt in his first appearance for 16 months. New signing Sam Davies hit the upright with the conversion attempt, but landed a penalty shortly after to extend the lead. Winning a string of penalties, the Scarlets had a number of catch-and-drive attempts to get over the Dragons line, but were repelled time and time again. Then, the home crowd of 2,657 were brought to their feet by an opportunist score from wing Owen Jenkins, who took advantage of a rare error by Johnny McNicholl to hack through and score. Davies converted, but missed a penalty with the last kick of the half as the Dragons went in at the break 15-0 ahead. The Scarlets made four changes at half-time with Ed Kennedy, Dan Jones, Paul Asquith and Tom James coming on. But the momentum remained with the Dragons, who struck for their third try four minutes after the restart. A flat pass found Adam Warren free out wide, he fed another former Scarlet Rhodri Williams, who put Sam Davies over for his first try for his new club. A period of Scarlets pressure saw Steff Evans skip away from a defender before putting Dan Jones over in the corner, but the Dragons hit back immediately with their fourth try courtesy of replacement Will Talbot-Davies. A bust from Ryan Conbeer led to the Scarlets backline putting Baldwin over wide out; then, in the closing minutes, Tomi Lewis picked up and raced 75 metres unopposed for his second try of the day (he had crossed in the A-team match earlier). With minutes left on the clock Phil Price was shown yellow and it was the Dragons who had the final word with Jenkins going over for his second following a break from Jordan Williams. Attention now turns to the Guinness PRO14 opener against Connacht at Parc y Scarlets on September 28. Dragons – tries: A. Hewitt, O. Jenkins (2), S. Davies, W. Talbot-Davies. Cons: S. Davies (3). Pen: Davies. Scarlets – tries: D. Jones, C. Baldwin, T. Lewis, Con: D. Jones. Scarlets: Johnny McNicholl (repl Tomi Lewis 66), Ryan Conbeer (repl T. James 40 (repl Conbeer 48)), Corey Baldwin (repl Paul Asquith 40), Steff Hughes (capt), Steff Evans (repl Baldwin 67), Angus O’Brien (repl Dan Jones 40), Kieran Hardy (repl Dane Blacker 51); Rob Evans (repl Phil Price 60), Marc Jones (repl Dom Booth 66), Samson Lee (repl Werner Kruger 51), Lewis Rawlins, Steve Cummins (repl Josh Helps 48), Tom Phillips, Josh Macleod (repl Davies 59-61), Uzair Cassiem (repl Ed Kennedy 40). Referee: Adam Jones (WRU) Attendance: 2,657