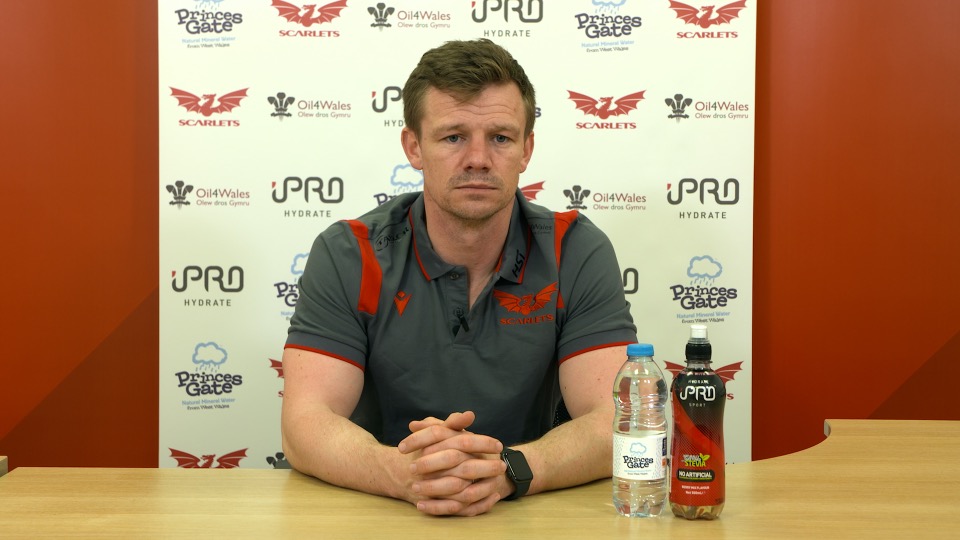 Head coach Dwayne Peel sat down to speak to the media this week ahead of Saturday’s URC clash with Glasgow at Parc y Scarlets. Here’s what he had to say.

Dwayne, first of all, great news with Scotty’s new contract

DP: “Yes, it is great news for us. Scotty will say himself it probably didn’t go the way he would have liked with his move (to the Ospreys), picking up a few injuries as well. To come back home was good for him and he has excelled, he has been great for me in the environment, he has led from the front on and off the field and he’s playing week-in, week-out, getting a lot of minutes under his belt. For the group he is very good as well, we have a few young centres and with his quality there is a lot to learn from him.”

How frustrating was the Connacht defeat?

DP: “It was a frustrating night. We started the game particularly well with the gameplan we wanted to take through, but in the middle part of the game we slipped away, we also created some opportunities which we didn’t finish. It was disappointing not to come away with the victory, but to be fair to Connacht they put pressure on us those 20 minutes either side of half-time and forced errors and we weren’t good enough in that period of the game. We have trained hard over the course of the last couple of weeks ahead of this game against Glasgow. It is an important game at home for us. We have 10 games in a row which is exciting and something we haven’t had this season. Glasgow home, then we go away to South Africa on Sunday. Continuity is going to be important for us.”

Any news on injured players returning?

DP: “We are starting to get players filtering back into the training group from injury and over the course of the next couple of weeks, we hope to see Blade Thomson, Tomas Lezana, Rob Evans and Josh Macleod back in the fold. They are big players for us and we have been without them for a large part of the season. You look at someone like Tomas, we haven’t seen the best of him yet because of injury. The glimpses we have seen, he was outstanding in Bordeaux and also against the Ospreys when he came on for Josh. Hopefully, we will see him getting a run of games.”

How close is Josh Macleod?

DP: “He is nearing a return. It has been tough for us as a group and for him to take because everyone feels for him. He is a good man, a leader here and he is just frustrated he can’t get on the field. What is important is that he comes back when he is ready because we don’t want any further setbacks.”

What are the group’s thoughts on travelling to South Africa again?

DP: “It hasn’t been a massive subject for us to be honest. Clarity has been important and once we understood we had to go back it has been business as usual. Obviously, there have been requirements we have asked of URC that have been put in place, we accept we have to go back there and if I was in the shoes of the Sharks and Bulls I’d want to play at home as well. It is about getting our bags ready to go now.”