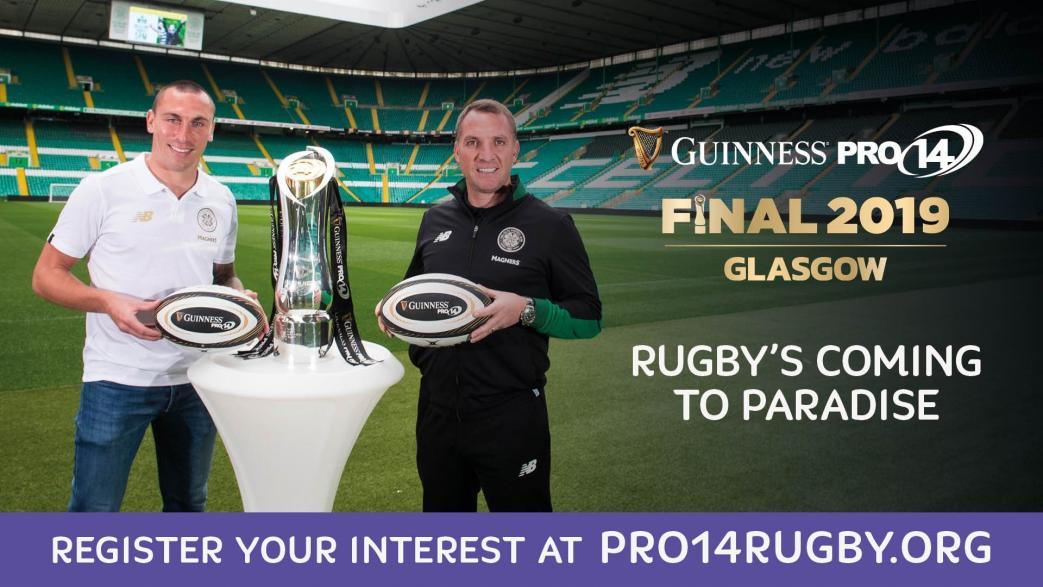 Celtic Park will host the 2019 Guinness PRO14 Final on May 25 as the Championship takes another historic step with the showpiece event being held outside of a traditional rugby venue for the very first time.

Fresh from the success of the 2018 Guinness PRO14 Final in Dublin that saw a new record attendance set for the third year in a row, Glasgow will play host as the Championship decider returns to Scotland for the first time since 2016.

Fans can register their interest now to gain Priority Access to tickets on August 20 before they go on general sale on August 21.

By visiting https://www.pro14rugby.org/register2019 fans will be able to pick out the best seats in one of sport’s most iconic venues while also accessing great offers for adults and families alike.

After the first Guinness PRO14 season brought about increased attendances and audiences across broadcast and social media, the move to host the Final at Celtic Park will ensure that fans new and old can experience the thrilling play that the Championship decider delivers every season.

With a capacity of 60,832 Celtic Park is known for football, but also hosted athletics and cycling when the site opened in 1892 and today holds a reputation for providing some of the most colourful and passionate atmospheres in all of sport. On the big day itself, Premier Sports will also be the host broadcaster capturing all of the action that will be seen all around the world.

Martin Anayi, CEO of PRO14 Rugby, said: “Bringing our Final to a world-famous stadium like Celtic Park is a truly historic step in the evolution of the Guinness PRO14. Since introducing Destination Final venues in 2015 we have seen the event thrive by making it about fans of rugby and not just the supporters of the two teams competing for the trophy.

“The bid put forward by Scottish Rugby, Celtic FC and the City of Glasgow was compelling from the very beginning and we’re certain that fans across the Guinness PRO14 will share in our excitement. Glasgow has so much to offer in terms of hospitality, culture and heritage and like our previous Finals in Dublin, Edinburgh and Belfast we can offer fans so much more than just a rugby experience.

“In the past number of seasons we have made many bold decisions which have transformed the Guinness PRO14 for the better and the choice of Celtic Park as the venue for the 2019 Final is yet another signal of our ambition to provide the best club rugby tournament possible for our clubs and our fans.”

Dominic McKay, Chief Operating Officer of Scottish Rugby and PRO14 Board Director, said: “I’m delighted we’ve been able to secure the 2019 Guinness PRO14 Final for the city of Glasgow, which will see the showpiece event played at Celtic Park, an iconic football ground in the west of Scotland.

“We hosted an outstanding Final for the Championship in Edinburgh two years ago and I’m delighted that we will be able to build on this in a city where rugby is really taking off thanks to Glasgow Warriors and our local rugby clubs.

“Rugby was a huge success in Glasgow for the 2014 Commonwealth Games, while Rugby Park and Pittodrie have also been great venues for Autumn Test matches over the years. This announcement is another great example of the sports working together.”

Peter Lawwell, CEO of Celtic FC, said: “We are very proud that the Guinness PRO14 Final is coming to Celtic Park for what we’re sure will be a fabulous occasion for the city of Glasgow, rugby supporters and for Celtic.

“Celtic Park is a world-class venue and our success of hosting events in the 2014 Commonwealth games and on Champions League nights where we have welcomed some of the biggest names in world football, proves that the stadium can produce unforgettable experiences time after time.

“We look forward to welcoming rugby fans from far and wide to Paradise on May 25 to share in the atmosphere of Celtic Park, we are sure it is an experience they will enjoy immensely.”

Ticket Information: Fans who register their interest will get exclusive 24-hour access ahead of general sale to pick out the best seats in Celtic Park and avail of Family offers:
Visit https://www.pro14rugby.org/register2019

Jordan Larmour (Leinster) – First player to score in in a Final