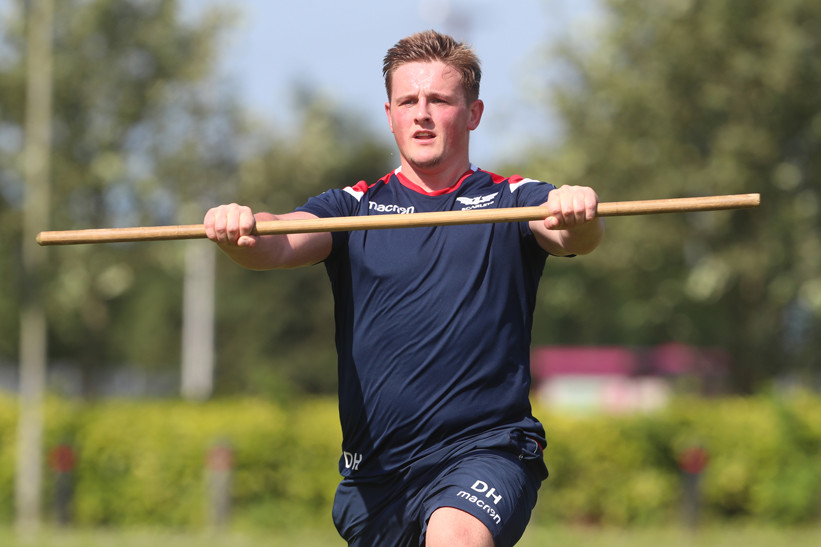 Hooker Dafydd Hughes will make his first appearance of the season in a much-changed Scarlets A side to take on Dragons A in the fourth round of the Celtic Cup on Saturday (1pm kick-off).

The former Wales U20s forward has recovered from a shoulder injury and is one of 11 personnel changes to the team that put the Ospreys to the sword 55-14 at Parc y Scarlets last weekend.

Eight of those incoming players were involved in the Scarlets’ win out in Jersey as the region’s head coach Brad Mooar again gives all of his squad a run-out in the Rodney Parade double header.

It’s all change in the back three with Tom Rogers, Morgan Williams and Wales international Tom Prydie coming in.

Ioan Nicholas partners Osian Knott in midfield, while Ioan Hughes retains the No. 10 jersey outside of the experienced Jonathan Evans, one of three former Dragons players in the starting XV.

Up front, there is an all-new front row of Dylan Evans, Hughes and Alex Jeffries, while new signing Danny Drake and Wales U20s lock Morgan Jones link up in the second row.

Jac Morgan, who captained the side against Ulster on the opening weekend, has the armband again and he will pack down in a youthful back-row alongside Lewys Millin and Joe Miles.

Scarlets A head coach Richard Kelly said: “We were delighted with the win over the Ospreys last weekend, but the most pleasing thing was seeing our young players stand up. They were excellent and that is what this competition is all about, giving opportunities to young players to see if they can perform at the next level.

“It is going to be another tough challenge at Rodney Parade on Saturday, but it is a chance to back up the Ospreys performance and try to kick on again.”

Saturday’s match is part of a Rodney Parade double header that will see the Scarlets senior side take on their Dragons counterparts with a 4pm kick-off.