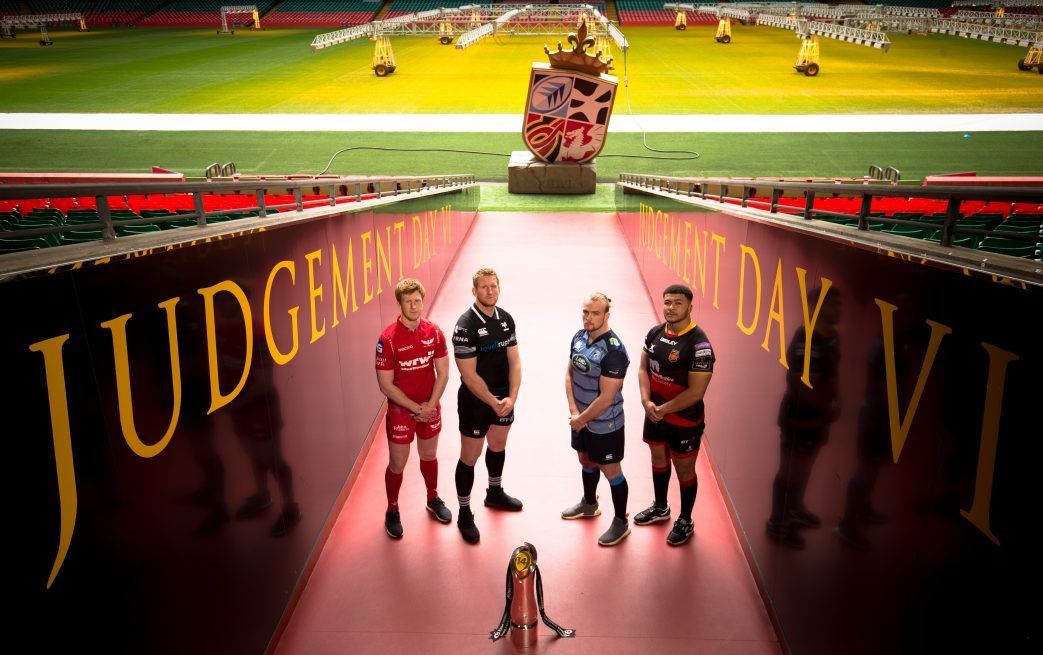 Four teams, three challenges – one winner. The Crabbie’s challenge brought together the four best rugby teams in Wales to battle it out ahead of Judgement Day with the Scarlets narrowly missing out to the Dragons on the last challenge.

The three tier challenge, organised by Crabbie’s Alcoholic Ginger Beer, saw each club put forward its best squad of four players, who stepped up to tests of speed, accuracy and balance. Lucy Cottrell, Brand Manager, Crabbie’s Alcoholic Ginger Beer, explains; “The challenge is not only a great chance to pit the clubs at Judgement Day against each other, the activity also allows grassroots players to directly compare themselves against some of the best in the country. We’d love as many budding players as possible to have a go!”

From the outset it was the Dragons who were to set the pace for the challenge. For some of the team this was the first time they’d kicked in years, however following a solid start, they scored an impressive 21 points after the first two rounds.

It was however the test of balance that proved most fruitful, with Arwel, Elliott and Zane stepping back and striking the ball between the uprights. The Dragons had set the bar of 36 points for the rest of the Judgement Day teams to beat – and it was the Cardiff Blues who were ready to take up the challenge next.

With Welsh International and captain of the 2013 Lions tour, Sam Warburton; Cardiff Blues’ prop and Tongan international, Taufa’ao Filise; and Cardiff Blues’ fly halves Ben Jones and Ben Thomas set to take on the challenge – the Cardiff Blues had pulled together a strong team.

Ben Jones shone in the first round, stroking over a whopping six penalties to get the scoring underway, the highest score by any individual player on the speed test. The team struggled thereafter with dizziness getting the best of all the players in the final challenge.

The day ended with Cardiff Blues notching up 11 points, not enough to beat the Dragons, but with the Ospreys and the Scarlets to come, it could still be a score to beat. Warburton added; “The boys had great fun. My excuse is that I haven’t kicked for six months! I think I’ll get practicing again in the back garden.”

The Ospreys were next up, and the stage was set at their training facilities at the Llandarcy Academy of Sport with Ospreys Prop and Moldovan international Dmitri Arhip, Ospreys centre Ben John, Welsh International and Ospreys centre Ashley Beck, and Ospreys scrum half Reuben Morgan Williams making up their team.

With a consistent performance in challenge one, the team were off to a solid start, notching up nine points between them, however it was all still to play for, and round two also added a further eight points leaving them needing all four of the final ‘dizzy’ shots at goal to move into the lead.

With Ashley stepping back and slotting it through the posts, the opportunity was still on, however the rest of the team couldn’t follow his lead, leaving the Ospreys with 22 points. A very respectable score putting them in second place with just the Scarlets to go.

The last stop was at Parc y Scarlets where the Crabbie’s Challenge was to crown the overall winner of the pre-Judgement Day showdown.

Billy McBride started well setting the bar high with five scored in the speed test and the others followed suit notching up an impressive 14 goals between them.

Another strong round in test two, with Josh and Scott both scoring, meaning the winner of the Crabbie’s Challenge had come down to the final test. If the Scarlets could score all four of their final ‘dizzy’ penalties, victory would be theirs.

With Scott able to slot his through the posts, there were three remaining, however Billy, Josh and Shaun were not able to follow it up, leaving the Scarlets with 23 points, enough for second, but not enough to take the title. It was to be the Dragons who would take the victory, with the Scarlets squeezing the Ospreys into third.

To see more of the challenges visit https://vimeo.com/crabbiesuk and https://www.facebook.com/CrabbiesUK/ – have a go yourself and send it to @CrabbiesUK on Facebook?