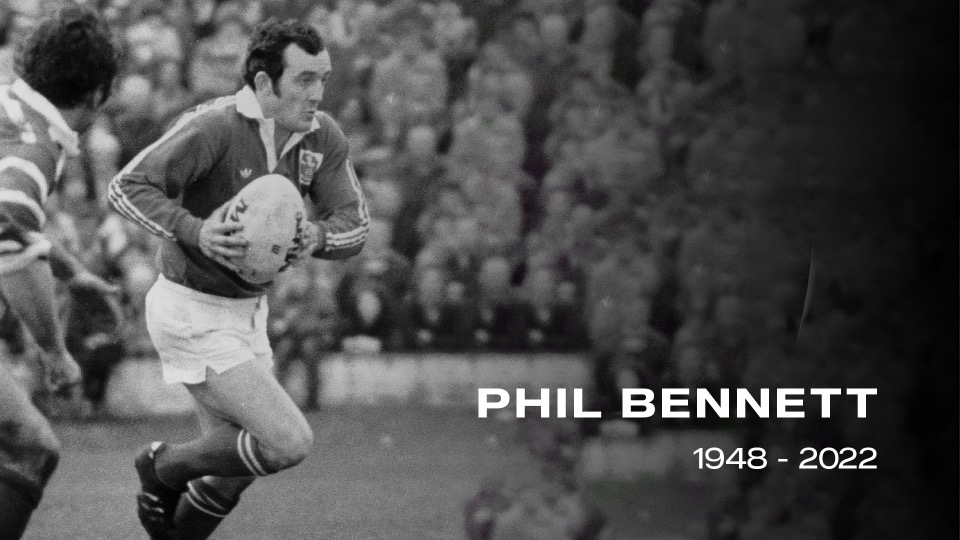 It is with deepest sadness that we announce that our former captain and Scarlets President Phil Bennett has died at the age of 73.

One of the all-time legends of the game and widely regarded as the greatest player to wear the Scarlets jersey, ‘Benny’ played 413 times for Llanelli RFC from his debut against arch rivals Swansea at the age of 18 to his final appearance at his beloved Stradey Park in 1981.

A player with stardust in his boots, he possessed a sidestep that would mesmerise defenders — his jinking run to spark ‘the greatest try ever scored’ for the Barbarians against New Zealand in Cardiff in 1973 will live long in rugby folklore.

Born in Felinfoel, Phil attended Coleshill Secondary Modern School where his all-round sporting prowess, both at football and rugby, was clear to see from a young age.

After starring in the No.10 shirt for Llanelli, he was capped for Wales at the age of 20, going on to play 29 times for his country during a golden era for Welsh rugby where he was part of an imperious side that won two Five Nations Grand Slams and three Triple Crowns.

He also dazzled in the iconic red of the British & Irish Lions, a pivotal member of the ‘Invincibles’ squad in South Africa in 1974, where he scored a stunning individual try against the Springboks in the second Test in Pretoria. He went on to lead the tour party to New Zealand three years later.

His captain on that South Africa tour, the great Willie John McBride wrote of Phil: “He was to rugby what Botham was to cricket, Cruyff to football and Nastase to tennis. He had a certain magic, an undefinable quality. He had the audacity to attempt the unusual and to lift spectators out of their seats.”

Memorably, he was part of the Llanelli side that claimed a historic victory over the All Blacks at Stradey in 1972 — a day he always cited as his greatest in rugby. Ironically, it was a penalty miss from Benny, which rebounded off the Town End crossbar, that led to Roy Bergiers’ match-winning score that afternoon.

“He was the best fly-half I have ever seen on a rugby field,” said his former club captain and Wales and Lions team-mate Delme Thomas.

Phil was also instrumental in helping Llanelli dominate the domestic scene, with the club winning four Welsh Cup finals during the 1970s.

After retiring, he became a respected radio and television commentator with BBC Wales and newspaper columnist for the South Wales Evening Post and Daily Mirror.

Phil and his family were regular supporters of the Scarlets, both in the stands of Stradey and more recently at Parc y Scarlets where one of the stadium lounges is named in his honour.

A global rugby icon, he was awarded the OBE in 1979 for his services to sport and inducted into World Rugby’s Hall of Fame in 2005. He was named Scarlets President in 2011.

A sculpture was recently unveiled in Phil’s home village of Felinfoel to celebrate a man who gave so much to his local community.

Scarlets Executive Chairman Simon Muderack said: “As a club, region and community, we are devastated by this news. Wherever the Scarlets travel around the world, people mention the name Phil Bennett.

“He was an icon of our sport, a rugby superstar, but someone who always remembered his roots. There was no finer ambassador of Scarlets Rugby than Phil, a player respected across the rugby world, both during his career and long after he finished playing.

“Phil was a hero and friend to so many people, not only in Llanelli and West Wales, but throughout the game and I am sure a lot of Scarlets supporters will have their own particular stories of the times they met and chatted to ‘Benny’. He loved the club and epitomised the values we hold true — humility and pride in our community.

“On behalf of everyone at the Scarlets, we send our heartfelt condolences to Pat, Steven. James and all of Phil’s family and friends at this incredibly sad time.”

For those wishing to pay their respects, flowers can be left at the ‘Stradey Gates’ at the main entrance to Parc y Scarlets.