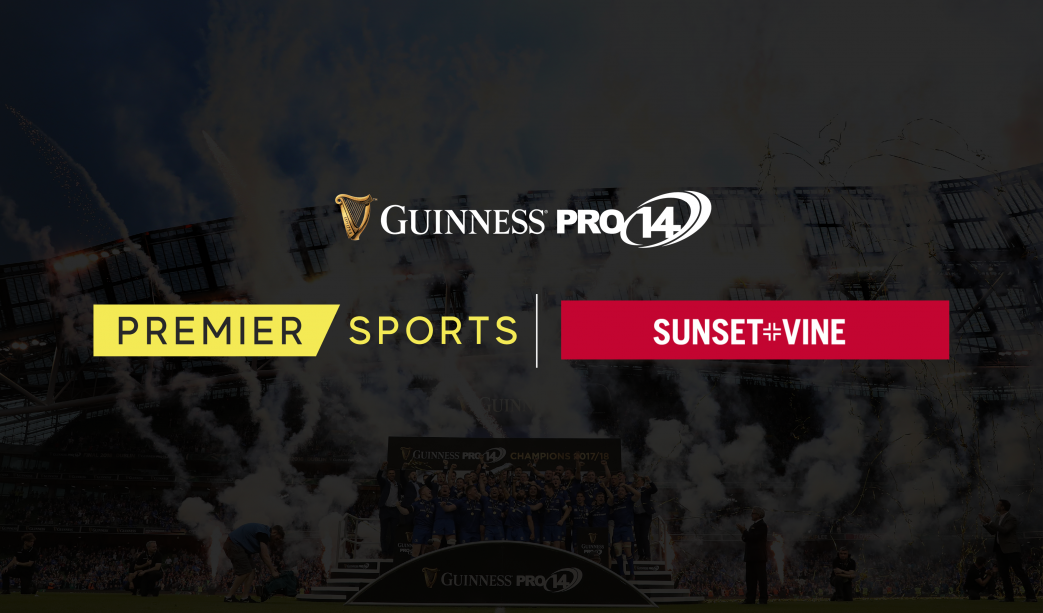 Premier Sports has awarded the multi-million pound contract to produce its live coverage of Guinness PRO14 to Sunset+Vine, the independent TV sports producer behind BT Sport’s Rugby and Premier League coverage. The three year deal will see Sunset+Vine produce over 200 hours of live rugby coverage for Premier Sports each season including the annual showpiece final, which for this season will be at Celtic Park in May 2019.

“We are very happy to confirm that Sunset+Vine is going to be producing our coverage of the Guinness PRO14 following a very competitive tender process. Appointing the leading UK rugby production company demonstrates our commitment to delivering the very best coverage of the tournament. The Guinness PRO14 is a hugely important property for Premier Sports and in Sunset+Vine’s hands we know that their quality and wealth of experience in rugby production will deliver the best for our viewers.”

In April of this year Premier Sports signed a landmark three year deal with PRO14 Rugby to show all 152 games live each season across the UK including Northern Ireland. The season kicks off on 31st August with all seven live games live on Premier Sports and Free Sports on the opening weekend. The fixture list brings derby games early in the season with Scarlets v Ospreys, Dragons v Cardiff Blues, Leinster v Munster and Ulster v Connacht all being shown live on Premier Sports over the weekend of the 5th and 6th of October. The festive season brings three more rounds of derby action across two weekends in December and the first week of January. The only place to see all these derby games live will be on the Premier Sports channels.

“We are delighted to have been awarded this contract by Premier Sports. We are proud of our track record in rugby that spans seven years of the Aviva Premiership, first with ESPN and subsequently for the past four years with BT Sport. Add to this our experience with the Champions and Challenge Cups in the UK, Lions Tours, Rugby World Cups and production of the Six Nations in Italy, and we believe we are well placed to deliver the Guinness PRO14 with the quality of coverage that this world-class competition deserves.”

Premier Sports and Sunset+Vine will be announcing their line-up of commentators, analysts and presenters over the coming weeks. Some new and familiar faces will be drawn from a pool of top talent across Scotland, Wales and Northern Ireland.

In April 2018, Premier Sports announced a landmark partnership with PRO14 Rugby to broadcast every game from the Guinness PRO14 live across the UK for three years. All 152 games will be broadcast with one game per round shown free-to-air on the FreeSports channel.

Premier Sports and FreeSports also hold ice hockey rights for the NHL, CHL, SHL, KHL weekly highlights and the IIHF World Championships. It is also the home of NASCAR Monster Energy Cup & GAA along with football from Europe.