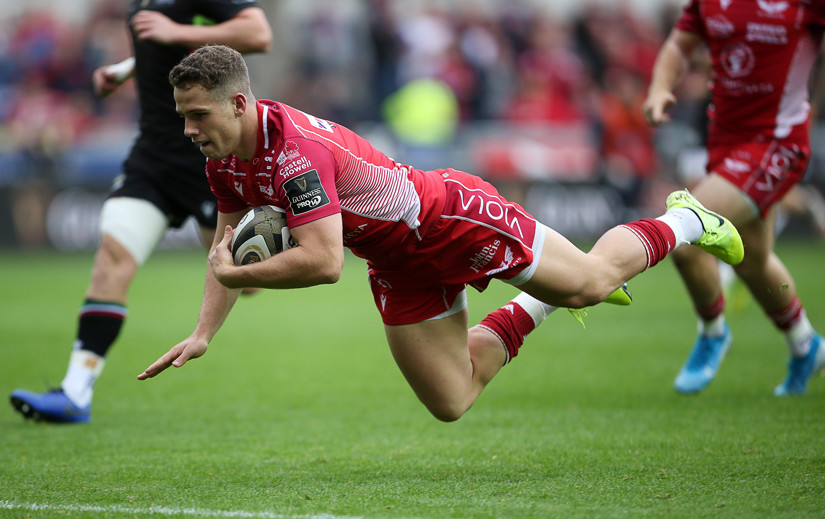 Scarlets soared to the top of the Guinness PRO14 Conference standings after an emphatic 54-10 eight-try victory over Zebre at Parc y Scarlets.

The home side dominated the contest from first to last to make it three wins from the opening three rounds of the competition.

Playing with a real adventure and ambition, the Scarlets had the bonus point secured before the half-hour mark.

Man of the match Kieran Hardy grabbed two of them, while Josh Macleod and Ryan Conbeer also crossed.

Scarlets shot out of the blocks and were over for the game’s first try with just 90 seconds on the clock.

International wing Steff Evans made the incision in midfield and he found Hardy on a familiar support line on his inside with the scrum-half having far too much pace for the covering defence. Dan Jones converted and the Scarlets were off to a flyer.

A chip and chase from Evans almost brought another, but it wasn’t long before the home side were celebrating their second after openside Josh Macleod touched down from a slick catch-and-drive move.

Zebre hit back with a penalty through fly-half Michaelangelo Biondelli, but the Scarlets’ response was swift.

Uzair Cassiem punched the hole, Steff Hughes put a delicate kick through and Ryan Conbeer was first to the ball for the score.

With the penalties racking up against the Scarlets, Zebre claimed their first try from hooker Marco Manfredi, converted by Biondelli, but on 29 minutes the home side had their bonus point in the bag.

Conbeer made the break after collecting a cross-kick, Paul Asquith took play on and his inside pass found that man Hardy for his second.

Leading 26-10 at half-time, Scarlets enjoyed another rapid start to the second period as the outstanding Taylor Davies finished off a line-out drive to celebrate his first PRO14 start.

A deft chip from Hughes set up McNicholl for try number six with replacement Angus O’Brien adding the extras.

Lewis Rawlins was shown yellow midway through the half, but Scarlets’ 14 men continued to press.

Dan Davis spilled the ball over the line after a charge down by fellow sub Jonathan Evans, but moments later replacement lock Josh Helps was on hand to dive over for his first try for the Scarlets. O’Brien converted again.

There was still time for a spectacular finish – McNicholl plucking the ball out of the skies to cross for his second to complete a comprehensive win.