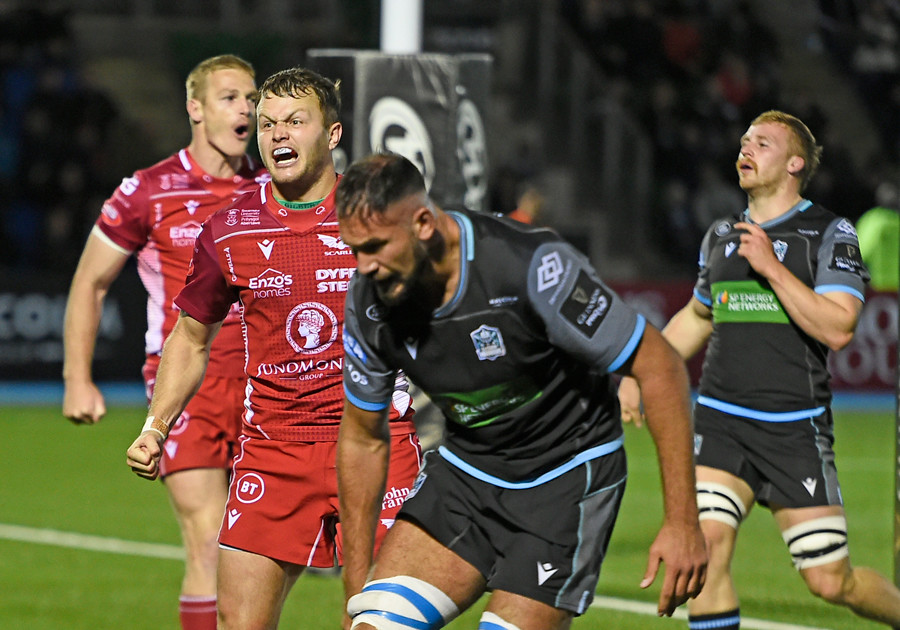 A second-half try blitz, combined with a superb defensive display earned the Scarlets a thrilling 25-21 victory over Glasgow Warriors at Scotstoun.

The West Walians made it two wins from two in the Guinness PRO14, but they had to dig deep to deny the home team in a nervous finale.

Tries from scrum-half Kieran Hardy, centre Paul Asquith and wing Steff Evans in the space of seven dazzling second-half minutes had put the visitors 25-9 ahead going into the final quarter.

But the Warriors responded strongly and the Scarlets were holding out on their own line when the final whistle blew.

There was little sign of what was to come in a disjointed opening period between two sides missing a host of internationals on World Cup duty.

A couple of penalties from fly-half Dan Jones and two from opposite number Brandon Thomson saw the two former champions go in at half-time locked at 6-6.

However, after Thomson had landed a third penalty the Scarlets took a firm grip on proceedings.

Making the most of a loose Glasgow cross-kick, Asquith – celebrating his 50th appearance – scythed through before feeding Hardy on his inside for a free run to the try line. Jones converted and minutes later the Scarlets were celebrating a second try.

Johnny McNicholl intercepted in his own half to set the Scarlets on their way; skipper Steff Hughes was dragged down just short after a brilliant chip and gather, but when the ball was recycled Asquith cut a great line to cross the whitewash.

Replacement Angus O’Brien converted to take the score out to 20-9, then Evans pounced, hacking through and showing great pace and composure to gather the loose ball and touch down. It was his 40th try in Scarlets colours.

O’Brien hit the post with a penalty shortly after and with close to a quarter of the match remaining, Glasgow sensed they were still in it.

Thomson cut through to reduce the arrears, then Stafford McDowall touched down following a great run and off-load from international centre Huw Jones.

With only four points between the sides, Glasgow pressed for the winning score in the closing minutes.

But the Scarlets defence, with man of the match Uzair Cassiem to the fore, managed to hold firm.

Josh Macleod, who enjoyed another outstanding game, was yellow carded and then in a dramatic finale, as Glasgow drove to within inches of the line, the ball was spilled and the Scarlets were able to kick the ball dead.

The Scarlets will look to continue their winning start under Brad Mooar when they welcome Zebre to Parc y Scarlets on Saturday.