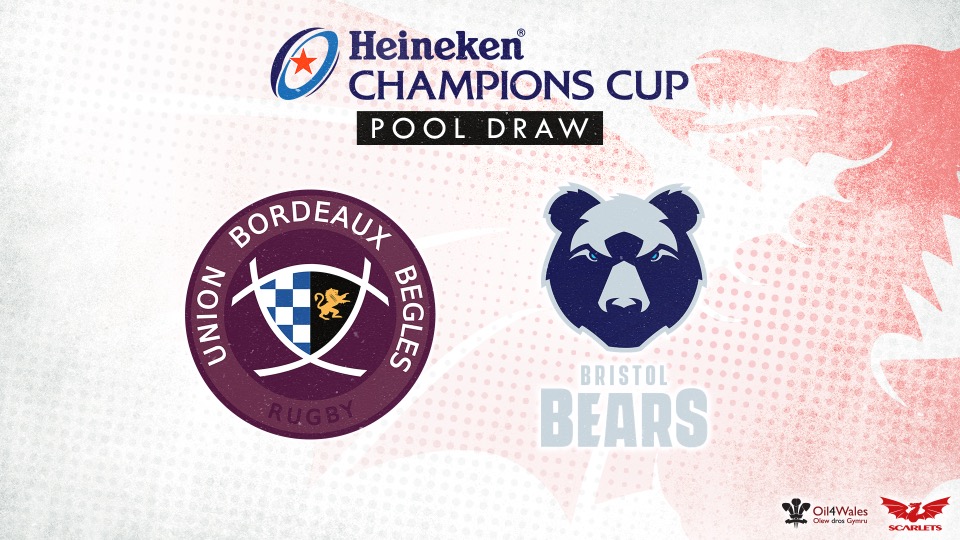 Scarlets have been drawn against French side Bordeaux-Begles and Gallagher Premiership big-hitters Bristol Bears in the pool stages of the 2021-22 Heineken Champions Cup.

The draw took place in Lausanne on Wednesday lunchtime with Scarlets drawn in Pool B as one of the tier three sides. Bordeaux-Begles and Bristol were drawn as the tier two teams in the same pool.

Scarlets have never met Bristol in Champions Cup competition with the Bears having established themselves as one of the leading lights of European rugby in recent seasons, lifting the Challenge Cup in 2020-21 and losing out in a thriller to eventual champions Harlequins in the semi-finals of the Gallagher Premiership.

Bordeaux were beaten in the semi-finals of this season’s Champions Cup and French Top 14. The last time the Scarlets met the French side was in 1998-99. Scarlets won the home match 22-10 at Stradey Park, but were heavily beaten 48-10 on French soil.

Scarlets head coach Dwayne Peel said: “Bordeaux and Bristol are two high-quality sides packed with internationals, it is a really exciting challenge for us.

“We have a great history and tradition in this competition and we are looking to forward to competing with the best sides in European rugby again.”

The exact dates of the Heineken Champions Cup pool stage fixtures, as well as venues, kick-off times and TV coverage, will be announced as soon as possible following consultation with clubs and EPCR’s partner broadcasters.

The 2021/22 tournament will be played over nine weekends with four rounds of matches in the pool stage. The eight highest-ranked clubs from each pool will qualify for the knockout stage which will consist of a Round of 16 on a home and away basis, quarter-finals and semi-finals, with the final in Marseille on 28 May 2022.