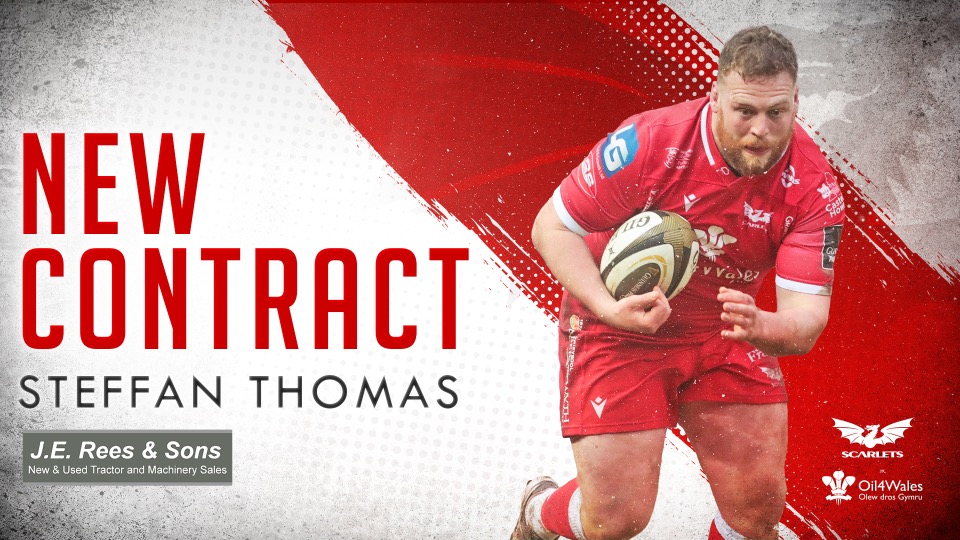 Prop Steffan Thomas has signed a new contract committing his future to the Scarlets.

The loose-head, who celebrates his 25th birthday today (Friday), has enjoyed a breakthrough season with the senior squad, making eight URC appearances, seven of them starts.

From a farming family, Thomas played his club rugby for Newcastle Emlyn RFC. He was educated at Ysgol Dyffryn Teifi and went on to study at Coleg Sir Gar while at the Scarlets Academy.

A Wales U18s and U20s cap, he has played in the Welsh Premiership for Carmarthen Quins and has battled back from a couple of serious knee injuries early in his professional career to establish himself in the Scarlets squad.

“I am enjoying having a regular run of matches and feel my all-round game has really come on this season,” he said.

“It is fantastic to have a coach of the calibre of Ben Franks, someone who has won World Cups with the All Blacks, to learn off as well as the all the international boys who are helping mentor the younger front-rowers who are coming through at the club.

“We have come up against some big scrums this season, particularly when we went to South Africa – they had virtually a Springbok front-row against us when we played the Sharks – but I feel we have been more than holding our own and there is a lot more to come from us.

“We have three matches left and hopefully we can put in a big finish to be the top Welsh side and also get into the URC play-offs.”

Scarlets head coach Dwayne Peel said: “Steff is one of a number of promising young front-rowers we have at the club who have taken their chances this season.

“They have all put their hands up and the great thing is there is a huge amount of growth to come from them.

“Players like Steff are pushing senior internationals for the starting spot and that can only be a good thing for the squad. I am looking forward to seeing how Steff continues to develop over the next few years.”

Steff is sponsored by JE Rees and Sons.