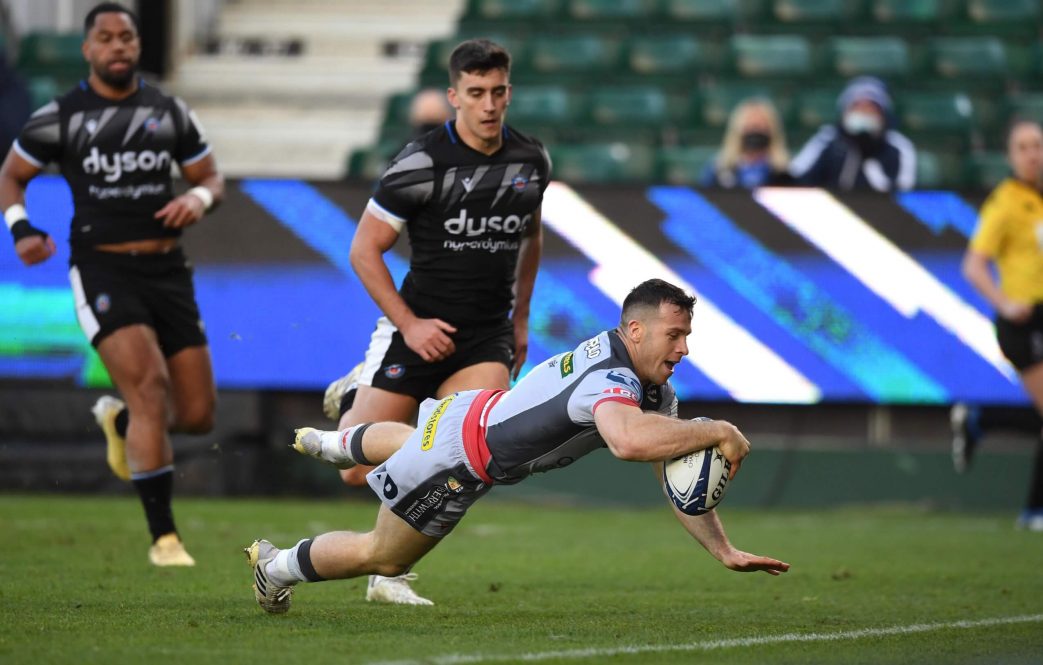 Scarlets dug deep to claim a Champions Cup nail-biter at The Rec, producing an incredible defensive effort in the final dramatic minutes to claim a 23-19 victory.

With the clock into the red, after a series of short-range drives at the Scarlets line, scrum-half Ben Spencer darted for the whitewash, but was denied by young replacement lock Morgan Jones. In a dramatic finale, referee Alexandre Ruiz went to the television match official, who ruled no try, to the huge delight and relief of the visitors.

Throughout a tense Pool A encounter, there was little between the two sides with Scarlets scoring a try in each half through scrum-halves Gareth Davies – on his 200th appearance –  and Kieran Hardy.

Both teams had their chances to win, but in the end the spoils and the famous old rag doll were heading to West Wales.

It was Bath who started the stronger and were rewarded with an early penalty from the boot of England scrum-half Spencer.

The Scarlets, though, responded in blistering fashion. Leigh Halfpenny freed man of the match Steff Evans on his outside with the flying winger doing superbly to burst through and find Davies on his inside.

The scrum-half still had work to do, but sidestepped the final defender for a trademark score.

Halfpenny converted, but was then just short with a long-range attempt from halfway.

Then on 18 minutes, it was the 2,000-strong home crowd who were celebrating their side’s first try as Bath stretched the Scarlets’ defence to send wing Ruaridh McConnochie over.

Spencer missed the conversion, but added two further penalties, sandwiching one from Halfpenny to ensure the home side led 14-10 at the break.

The second half continued to fluctuate towards the dramatic conclusion.

Halfpenny reduced the arrears to 14-13 six minutes after the restart, but Bath grabbed the momentum of the contest and responded with a close-range score for prop Will Stuart.

Josh Macleod replaced Jac Morgan, who enjoyed another outstanding game, and made an immediate impact with a turnover, while the experience of Jon Davies also proved crucial off the bench.

With 16 minutes remaining, the Scarlets were in the lead again, Dan Jones combined with Rob Evans, who produced a sublime off-load to put Hardy away under the posts for a score converted by Halfpenny.

With one point in it, both sides had chances.

Hardy just failed to find Evans on his outside with the line beckoning, while Bath’s route-one approach came against brick-wall defence.

A Halfpenny penalty gave the Scarlets a four-point cushion going into the final minutes, but Bath stole the kick-off before pounding away at the visitors’ line.

It needed some incredible defence from Halfpenny, Jones and Co to keep Bath at bay, but that’s what they did to record another famous victory at The Rec.