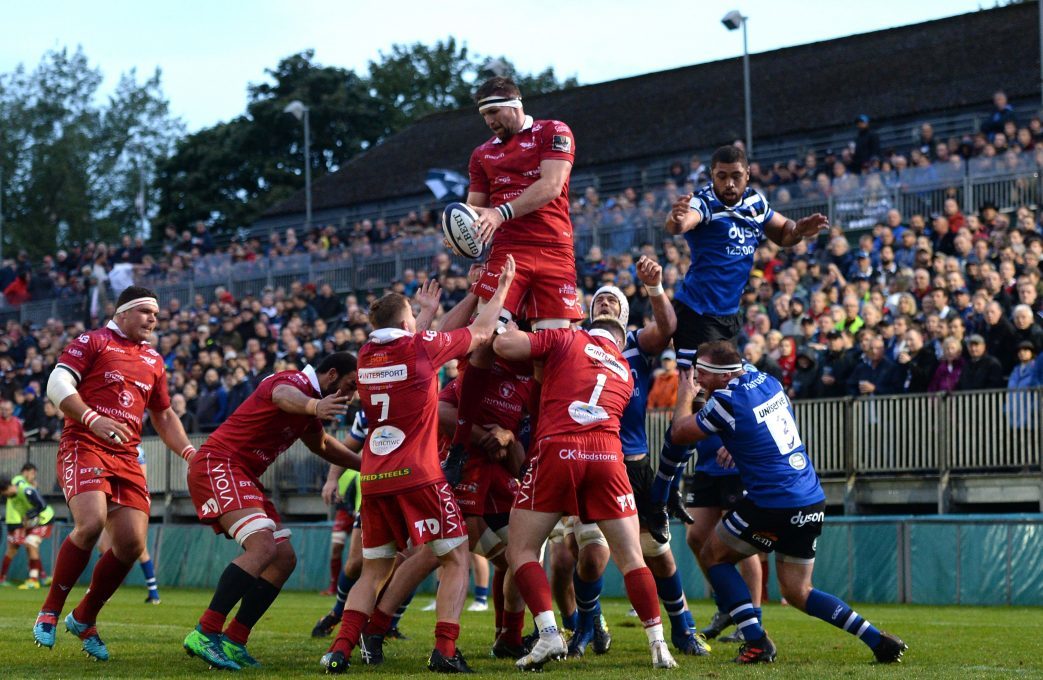 Bath get the game underway with the rain halting just in time for the start of Scarlets’ second, and final, pre-season friendly.

Both teams show great intent early on with Scarlets winning territory inside Bath’s half early doors. With only a few minutes on the clock Samson Lee is replaced by Werner Kruger after he gets caught at the bottom of a pile of bodies in a huge collision. He gets up to his feet but his night on the field is unfortunately over.

Bath coming crashing towards the Scarlets after a period of pressure in their own half. After a rampaging run tighthead prop Henry Thomas crosses the whitewash and Rhys Priestland adds the conversion.

Five metre line out and a throw in from Elias. Blade Thomson gets his hands on the ball and we’re moving. Referee plays advantage.

Bath’s Taulupe Faletau is shown a yellow card as Bath continue to infringe. Scarlets look to build pressure in the homeside’s 22.

Scarlets’ patience pays off as Patchell gathers the ball after solid scrum from the forwards. Runs through Bath’s defence and crosses the whitewash. Leigh Halfpenny adds the conversion from the far touchline bringing the Scarlets back level-pegging with Bath.

It’s Bath’s turn to charge the line. They move quickly in to Scarlets’ 22. They hit some great lines, look as though they’re going to score under the post before shipping the ball out wide to winger Jack Wilson who touches down.

Bath push over for a third try but it’s held up. We come back for a scrum on the 10m line. They go again from the scrum and this time claim a try from lock Dave Attwood. Priestland adds the conversion.

Scarlets head down field with a Patchell kick to touch. Replacement hooker Ken Owens thorws to the line on Bath’s 22. The ball is worked through the hands but possession is handed back to Bath after a knock on. It’s a scrum in midfield on the 22. Bath get the penalty and kick downfield.

We’re back in their 22 after an advantage played from the line out. Possession isn’t in our hands for long. They kick down field, ball is back with us but we’re back in our own half. Sam Hidalgo-Clyne kicks the ball to touch to bring the first half to an end.

Joe Cokanasiga runs in an easy opener early on in the second half charging through Scarlets defence and touching down under the posts. Priestland adds the conversion.

As we edge towards the final fifteen minutes Scarlets get a touchdown over Bath’s try line. It has been a long period of pressure from the visitors but haven’t been able to ensure a clinical enough finish to get a score on the board. Time and time again we’re pushed back off Bath’s line due to errors. Patchell gets a kick to the corner and from there the forwards drive the ball over the line with tightead prop Werner Kruger claiming the prize.

The final ten minutes is all Bath’s as they score two tries in quick succession with Joe Cokanasiga running in a beauty of an interception after miscommunication in midfield by the Scarlets.

In the final moments of the game Bath cross for a seventh try bringing the final score to 45-12.

The Scarlets will regroup on Monday ahead of the opening round of the Guinness PRO14 against Ulster a week Saturday.