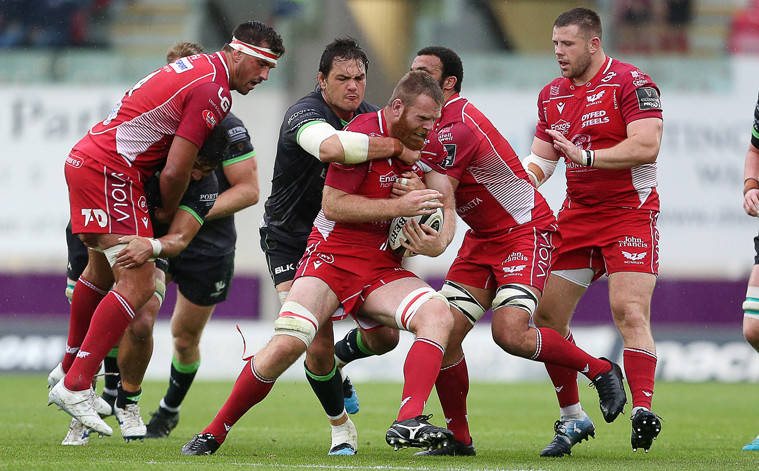 Tom Phillips believes the Scarlets are reaping the rewards of their hard work over the summer after making it three wins from three in the Guinness PRO14.

The Championship takes a break this coming weekend as the Rugby World Cup quarter-finals in Japan take centre stage.

But when domestic action resumes, the Scarlets will head to Edinburgh sitting at the top of the Conference B standings following victories over Connacht, Glasgow and a 54-10 hammering of Zebre on Saturday.

“There is a big mentality of togetherness in the squad and it is showing out on the field.

“We talked about the first block of three games and we’ve got the three wins we wanted. Obviously, there is stuff to work on, but overall we’re happy.

“There’s a lot of young boys that have come into the team and we know we’ve got a responsibility to play for the badge and to play for the supporters when the boys are away at the World Cup. Everyone is playing to their best ability at the minute and it is really enjoyable being part of this team.”

Phillips, a Grand Slam-winning captain with Wales Under-20s, has been part of an outstanding back-row unit in the opening three games.

He made his Scarlets debut four years ago, but has had to wait for his first PRO14 start – which came in the round one win over Connacht.

“I’m feeling good, I’m enjoying it. If you don’t enjoy rugby there is no point in playing,” added the 23-year-old flanker.

“In myself, I know I will always work hard, be it warming the squad up to play or now getting a few chances to play. My work ethic hasn’t changed.

“I’m grateful for getting a chance to run out there, but I’m going to keep on working hard and try and take every chance when it comes.

“There is huge competition here in the back row, so even when you’re not playing you are still learning a huge amount and strengthening your game training alongside some of the best players in the league

“I’ve worked hard the last couple of years, I’ve kept my head down and luckily enough I’ve been able to get a decent run so far.”

On the back-row combination with Uzair Cassiem and Josh Macleod, Phillips added: “We speak a lot about relationship chats, there has been a lot of that this year so we know each other as players and it does feel we are bouncing off each other.

Scarlets resume their Guinness PRO14 challenge against Edinburgh at Murrayfield on Saturday, October 26.

We are back at Parc y Scarlets on Saturday, November 2 when we take on Conference A high flyers Toyota Cheetahs. For all tickets go to tickets.scarlets.wales