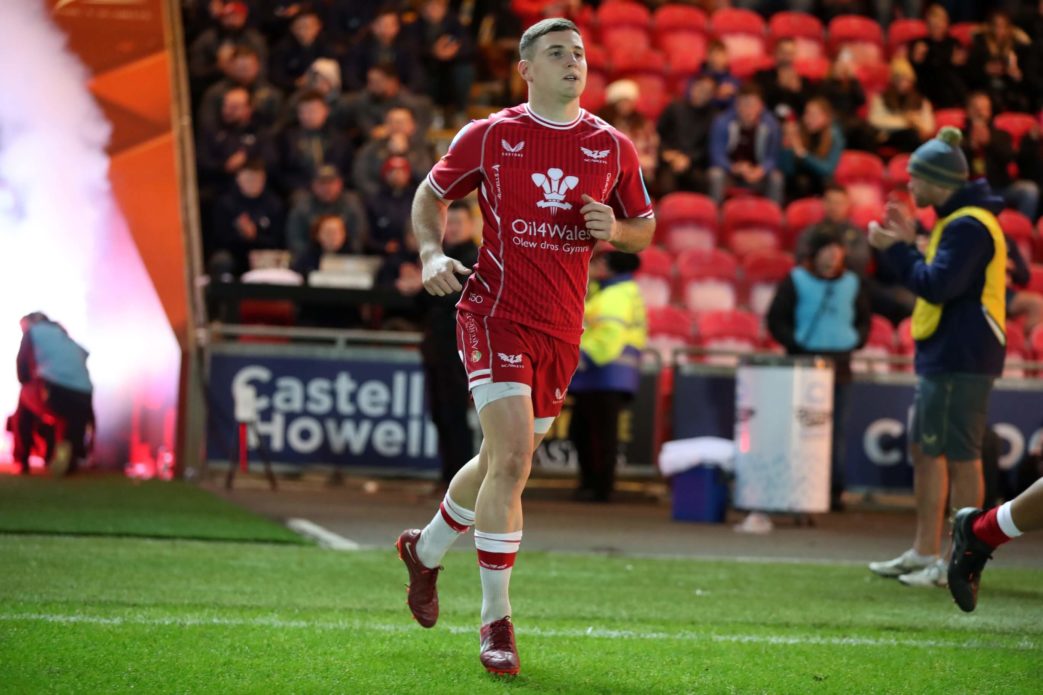 A try on his 50th appearance and a win against his former club made it a New Year’s Day to remember for Dane Blacker.

The scrum-half sniped over at the posts for a crucial second-half score as the Scarlets overcame the dismissal of No. 8 Sione Kalamafoni to claim a morale-boosting URC victory over the Dragons at a bouncing Parc y Scarlets.

“It was a good win from us, obviously down to 14 again we knew we had to dig deep. The Dragons have been playing well, they have had some good wins this season so we knew we had to turn up physically and we did that,” said Blacker.

“It is always tough going to 14, especially losing Si who’s been one of our best players this season, he does a lot of hard graft for us. We came together at half-time, regrouped and stuck to the game-plan. We knew we had to play a territory game and try and squeeze them and that’s what we did. It was a great effort from the boys to get the win.”

Blacker, along with Sam Lousi, led out the side on his 50th appearance in a Scarlets jersey, having made his debut for the club, also against the Dragons, in 2019.

“It is a brilliant honour for me,” he added. “I love playing for this club, to get 50 caps and top it off with a try is very pleasing. The boys here are great, great coaches, I am really enjoying my rugby at the moment.

“To be fair, for the try, the boys did all the hard work, I just picked up and scored from a couple of metres out. Credit to the forwards they put us on the front foot and allowed me to dive over the line.”

A member of the Wales squad this autumn, Blacker didn’t get his chance to win a first Test cap, but on current form he is pushing hard to make Warren Gatland’s squad for the forthcoming Six Nations.

The 24-year-old added: “It was awesome to be involved in the autumn, I was gutted I didn’t get the opportunity, I just need to keep working on my game and try to prove I am ready to play at that level.

“The coaches here want us to go out and express ourselves, play with freedom. We know results haven’t gone our way this season, it is about backing ourselves and showing the fans what we can do.”

Blacker also knows the competition for the nine shirt at Parc y Scarlets is just as fierce with Wales internationals Gareth Davies and Kieran Hardy fighting for the jersey and Wales U20s caps Archie Hughes and Harri Williams snapping at the heels.

“To be fair all the nines here are great, it is really competitive, but it helps us. We push each other every day in training which gets the best out of us because we know if we don’t perform there is always someone else who can step in and take the role, there is a lot of pressure but it only makes us better players.”

Having started out in the ranks of the Cardiff Academy, Saturday’s BKT URC round 12 clash at the Arms Park will have extra spice for the Ynysybwl product.

“It is a massive game, Welsh derbies are always big and we know it is going to be tough and it is going to be physical again,” added Blacker. “We’ll put in a good training week and it will be nice to be involved again going back to Cardiff.

“The games are coming thick and fast at the moment, it is about getting the body right, trying to play as much rugby as I can, getting consistency in my performance and going out there and enjoying myself and expressing myself.”