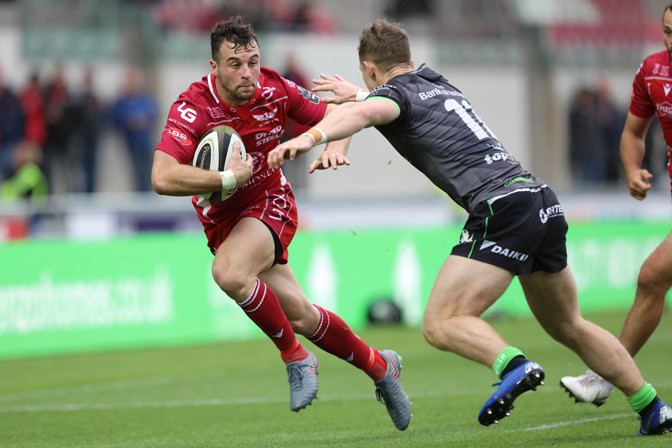 Scarlets produced a hard-earned 18-10 victory over Connacht to give head coach Brad Mooar a victorious Parc y Scarlets debut in the Guinness PRO14.

First-half tries from Steff Evans and Paul Asquith, combined with eight points from the boot of fly-half Dan Jones, was enough to get the Championship season off to a winning start on a wet and windy West Wales evening.

The Scarlets’ victory was based on a dogged defensive effort led by back-rower and man-of-the-match Josh Macleod.

The Pembrokeshire openside also claimed some crucial turnover penalties, while full-back Johnny McNicholl provided the cutting edge from deep before a monsoon descended on Llanelli in the second half.

Missing 15 players at the Rugby World Cup, Mooar fielded 13 home-grown players in his match-day 23, including a number of the region’s emerging talent.

Ryan Conbeer looked lively out wide, Dan Jones and Kieran Hardy showed maturity beyond their years at half-back, while Tom Phillips put in a typical workaholic shift in the back-row.

Centre and captain Steff Hughes also led by example at the heart of the action.

After soaking up an early period of Connacht pressure, Scarlets struck for the game’s opening try after 19 minutes.

After a series of drives from the forwards, Asquith juggled and went close before Evans pounced in the corner from short range.

The Scarlets extended their advantage six minutes before half-time.

An arcing run from that man McNicholl caused the alarm bells to ring in the visitors’ defence and then a superb dummy kick and pass from Hughes sent centre partner Asquith sliding in at the posts.

Jones’s conversion made it 12-0 before Connacht responded with a penalty through fly-half Conor Fitzgerald just before the break.

With the rain getting heavier and conditions deteriorating, the sides were finding it easier to play without the ball than with it and the Scarlets’ defence was in resilient mood.

With Connacht centre Tom Daly in the sin bin, Jones pushed the home side 15-3 ahead shortly after the restart, but a sustained period of pressure saw Connacht hit back when flanker Eoghan Masterson found his way over after a series of punishing drives.

Fitzgerald converted, but another Jones penalty moved the lead out to eight points and the Scarlets were able to see out the rest of the game for a morale-lifting triumph.