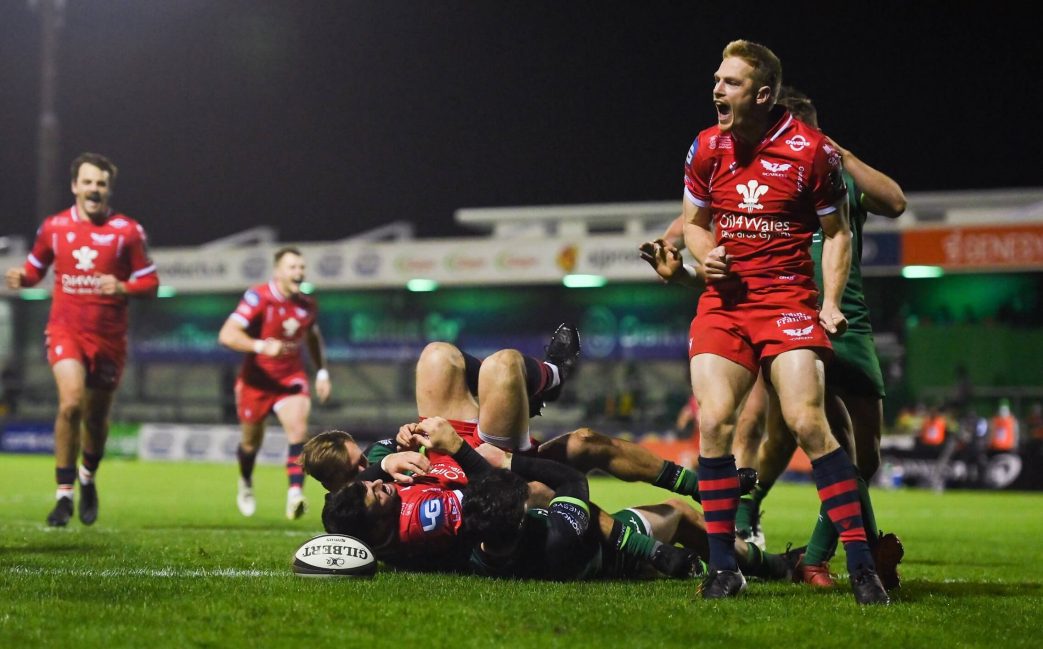 Wing Ryan Conbeer crossed for a stunning try double as the Scarlets produced their best performance of the campaign to claim a 20-14 victory over Connacht at a wet and windy Sportsground.

Despite the conditions, the Scarlets played with plenty of attacking intent and were rewarded with two first-half scores from the Pembrokeshire flyer and another after the break from scrum-half Dane Blacker.

But they also showed plenty of defensive grit and character.

Blacker and Steff Hughes produced last-ditch try-saving tackles, while Connacht were denied a late score by some outstanding try-line defence.

Looking to build on last weekend’s win over Zebre, the Scarlets opened up with plenty of confidence again and it was Conbeer who produced a sizzling finish after a lovely one-handed off-load from player of the match Johnny McNicholl. Dan Jones was wide with the conversion.

It prompted the home side into a determined response and on 17 minutes powerful No. 8 Abraham Papali’i twisted over under the posts with fly-half Jack Carty landing the straightforward conversion.

The Scarlets, with full-back McNicholl a constant threat, continued to press and added a second try nine minutes before the break – a carbon copy of the opener.

Again, McNicholl ran onto a lovely floated pass from Dan Jones, he found Conbeer in space and the winger did well to cut inside and reach out to cross.

Jones was just wide with the conversion attempt, but mastered the wind a few minutes later with a well-struck penalty to send his side 13-7 up at the interval.

It got better quickly for the visitors three minutes after the restart.

McNicholl was this time the instigator, running back from deep; the ball was fed to Paul Asquith, whose inside pass found Blacker racing up unopposed on the inside for a classic scrum-half score.

Jones’s conversion took the score out to 20-7, but it was the home side who had the bulk of possession and territory for the final half hour.

It needed a brilliant cover tackle from Blacker to deny full-back John Porch, then skipper Hughes got back to knock the ball out of a Connacht hand when a try looked certain.

Connacht did get their second try on the hour mark when Ireland international lock Ultan Dillane was driven over from close range and the home side came close to another with six minutes left on the clock, only to lose the ball over the line in the face of stubborn Scarlets defence.

With Connacht making one more desperate attempt to snatch the win, a turnover penalty two minutes into stoppage time from the outstanding Jac Morgan secured the spoils to seal four crucial points in the Conference B battle.