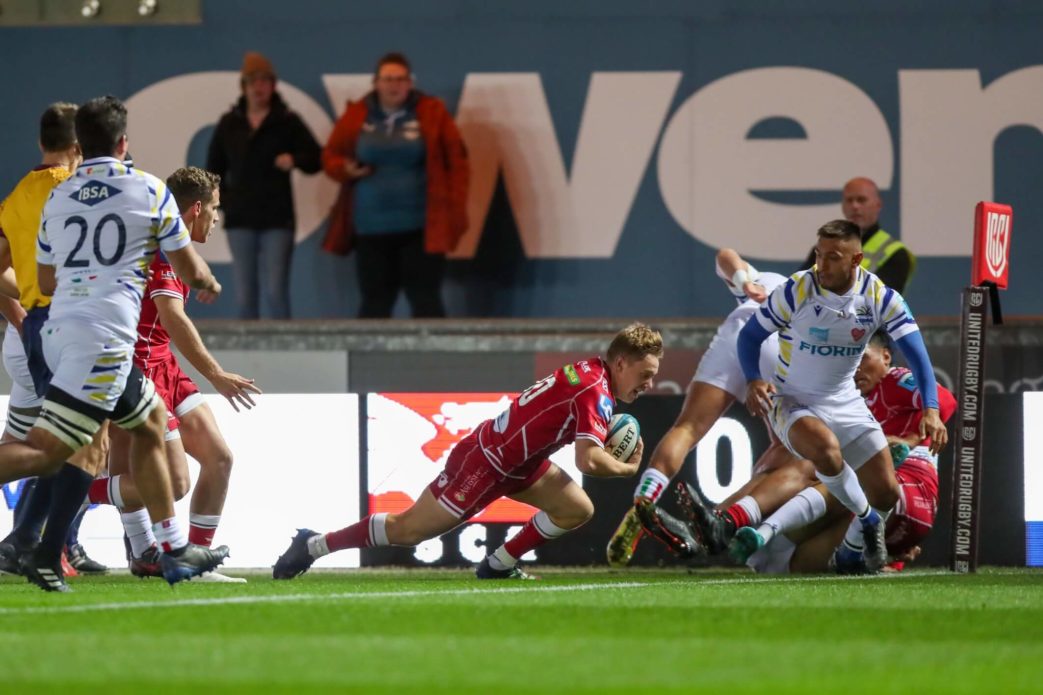 Fly-half Sam Costelow claimed two of them, one in each half, while Sam Lousi, skipper Jonathan Davies and wing Ryan Conbeer also got their names on the scoresheet.

Davies led by example throughout, an impressive figure in the Scarlets midfield; No 8 Sione Kalamfoni produced another age-defying display; openside Josh Macleod was back to his burgling best, producing a string of key turnovers at key moments, while Conbeer was a constant threat out wide, consistently busting the first tackle.

Reduced to 14 men early in the second half following the dismissal of Lousi for a high challenge, the Scarlets managed the final quarter impressively in torrential conditions, securing a dominant win with Conbeer’s late touchdown.

It was Costelow who got the home side up and running on six minutes, taking an off-load from Lousi after a brilliant miss pass from Scott Williams sliced open the Zebre defence. Halfpenny converted, only for Zebre to respond with a short-range score from flanker MJ Pelser.

Skipper Davies thought he was over for a second, but the TMO spotted a knock-on by scrum-half Kieran Hardy, who had been hauled down just short following a break by the lively Costelow.

The Scarlets were not to be denied however, with Lousi stretching over minutes later – a try again covered by the dead-eyed Halfpenny.

There was no doubting Davies’s try on the stroke of half-time as the centre twisted over following a trademark surge from the irrepressible Kalamafoni.

Leading 21-5 at the break, the Scarlets started the second period as they finished the first – on the offensive.

Costelow glided through a gap for his second and the Scarlets’ bonus-point score, then Lousi was red carded for a high challenge with half an hour of the game remaining.

Zebre took immediate advantage of the extra man with full-back Lorenzo Pani pouncing, but that was as good as it got for the Italians.

A Halfpenny penalty settled any nerves among a vocal home crowd, then the victory was sealed when Conbeer gathered a perfectly-weighted chip through by Davies for the crowning moment of a morale-lifting performance and result.