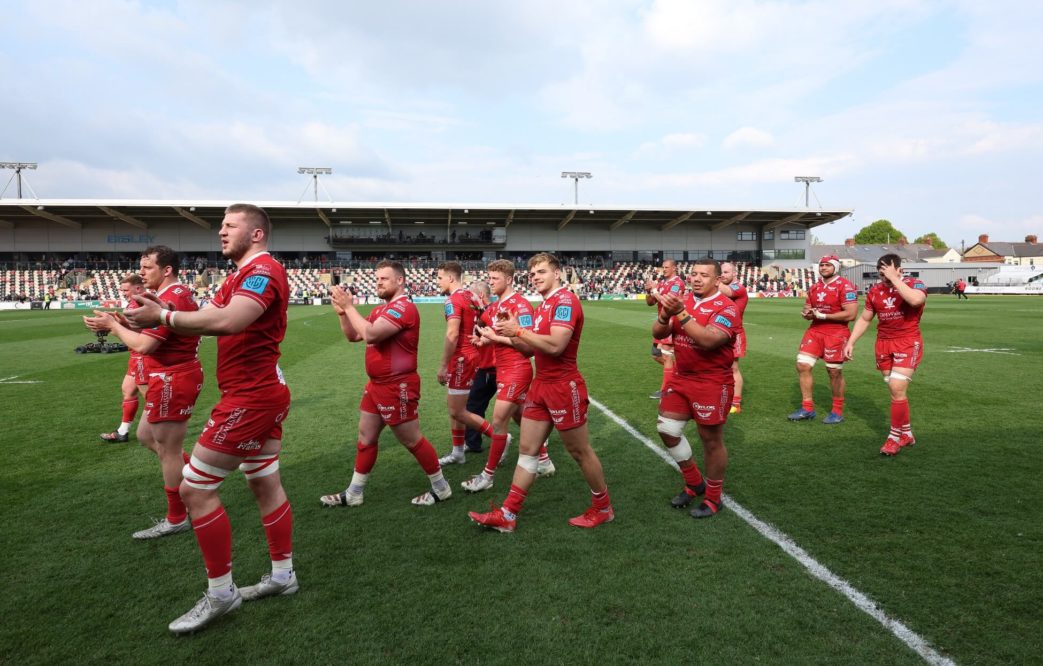 Head coach Dwayne Peel highlighted the ‘togetherness’ of the Scarlets squad after they battled back to secure a crucial bonus-point victory over the Dragons at Rodney Parade.

The 38-19 win keeps the Scarlets in the hunt to top the Welsh Shield and possibly sneak into the URC play-offs.

After leading 17-0 in the first half, Scarlet saw their lead overturned by a determined Dragons side who led 19-17 going into the final quarter.

But it was Peel’s side who finished the stronger, sealing the win with three converted tries.

“We started brightly and at half-time we were fairly comfortable,” said Peel. “To be fair to the Dragons, for the the first 20 minutes of the second half they were very, very good and put us under pressure, their maul worked well, they played in the right areas and we couldn’t get out. At 19-17 I thought we were in for a right battle.

“Credit to the boys, the togetherness we showed in the last 20, to firstly get field position and then when we got field position we were clinical, which is the story of the game. We showed good steel to come back at the end.

“I am also delighted to get the bonus point here;  traditionally, games are very tight between the two teams, we didn’t speak about it beforehand, but it is actually very important.”

Peel added: “When we review the game there will be areas we need to work on. Discipline was probably an issue for us, our exit at times was an issue, I thought our maul was very good and we got rewards and tries at the end of it.

“It’s a squad effort, yes we have a massive injury list, but we had a good 23 on the field and the boys gave it everything. Hopefully we can start drip feeding boys back into the squad which will help with depth.

“As I said, we are starting to get togetherness which I like and the boys are playing for the shirt. Both Scotty (Williams) and Foxy (Jonathan Davies) have led superbly well, that helps and having Sam Lousi back today was a big bonus.”

Lousi’s outstanding try-scoring display earned him the player of the match award.

“Over the course of the season Sam has grown into a massive leader for us. He runs the line-out, his presence is big for us and he is helping nurture the likes of Jac Price, who I thought was physical today, Morgan Jones as well.”