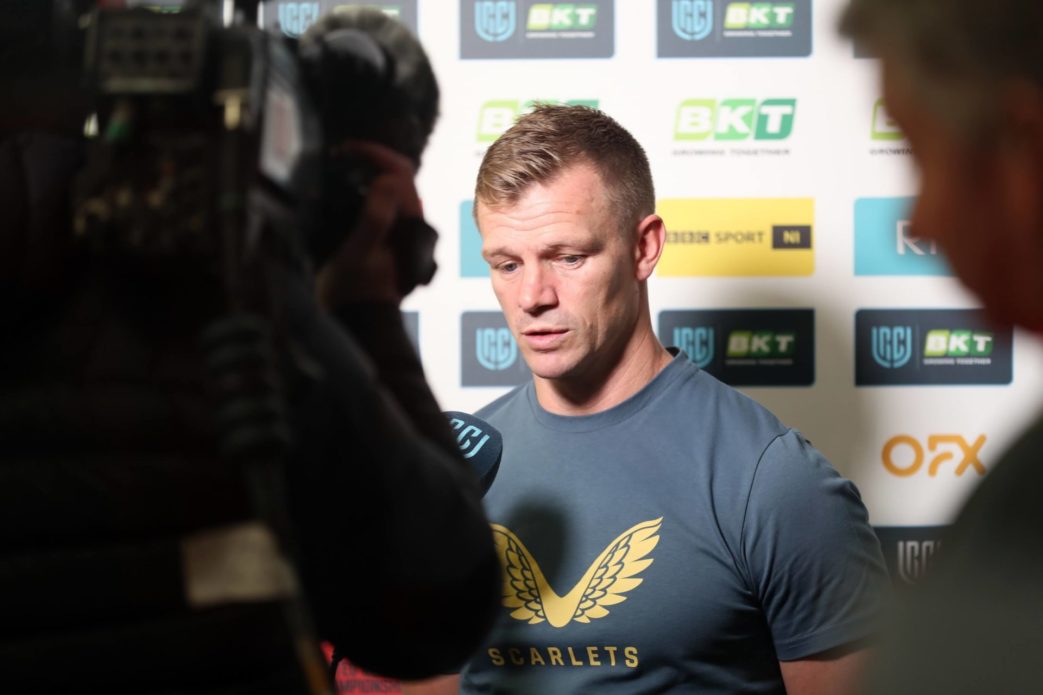 Scarlets head coach Dwayne Peel spoke to the media ahead of the Boxing Day derby against the Ospreys. Here’s what he had to say.

Dwayne, what kind of place are the Scarlets in after back-to-back wins?

DP  “Having those two wins was important for us, performance wise we played some really good stuff, especially in both first halves. There are elements we need to work on, but having maximum points from the last two weeks is obviously good. We have had consistency over the last couple of weeks which we haven’t had this season. It is just nice to get wins is the honest truth. When you perform well and the result doesn’t go your way it is tough. The group have been excellent in terms of their application; we understand this week will be another step up in intensity, but the boys are in good spirits and looking forward to it.”

What did you make of the Ospreys win out in Montpellier?

DP:  “To go to the French champions and win is huge. To be fair, they were really dogged in the way they went about it and played good stuff at times. It is no mean feat to go there and win. Ospreys obviously have a good pack of forwards, the majority of the Welsh pack are in that group. They have made themselves hard to beat. Look at the Leicester game, Montpellier, it is a tough grind and you have to be prepared to go hard against that pack. We understand that and we have to be ready for that. This game on Boxing Day is nicely set up and both sides need to win as well. Both sides have been in games and come out on the wrong side of results when it has been tough battles. We had a good tussle at the start of the season which ended in a draw and I am sure it will be a big battle again.”

What did you think of Vaea Fifita’s performance against the Cheetahs?

DP: “He is a serious athlete and you saw some glimpses of that last week. The challenge for him is to get the ball as much as he can because he is a real asset and, as I said, a serious athlete. He is a hybrid player who can play lock and six, he has played a lot of Test rugby at six, he is one who can play both for us.”

Do you have a selection headache at nine?

DP: “Definitely, Gar (Davies) was unavailable last week. Having Kieran and Dane together with Gar gives us good quality, really good depth. Dane has been very good for us these last couple of weeks, it is good to have those selection dilemas. They will be up against Rhys Webb, who is a focal point for the Ospreys with a wealth of experience, it is going to be a good challenge for them.”

DP: “Johnny won’t be available. I am hoping he will be available at some point through the festive season. The reality is he hasn’t trained rugby with us yet. I am hoping that will happen shortly but we will wait and see.”

How do you manage the emotion of this fixture?

DP: “I think emotion is important, it is not just another game it is a big derby and I want them to treat it that way. When you are feeling nervous eating your Christmas dinner, I don’t miss that. This is always a big occasion and the emotion of it is part of it. Having those rivalries is important, it is sport, it is no different to a Leicester-Northampton or Gloucester-Bath with that extra spice. I remember playing at the Liberty with a capacity crowd on a Boxing Day and you remember those games as players and as supporters. It is important that the boys relish those occasions. I have great memories of this fixture and the ones before, Swansea versus Llanelli, not just as a player but as a fan as well, going down to Stradey to watch. Hopefully we have a big crowd, it is a big occasion and if the crowd is there it will add to it and the boys will relish it.”