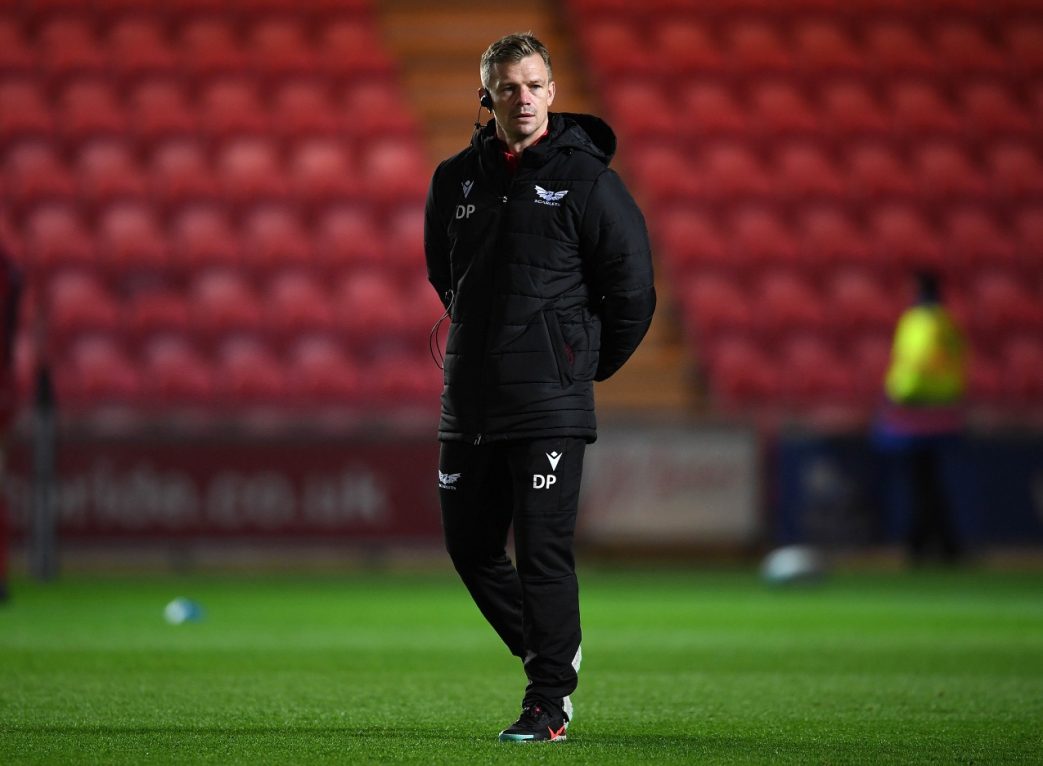 Dwayne Peel spoke to the media ahead of the Boxing Day fixture against Cardiff at the Arms Park – Scarlets’ first competitive game since October 22.

Here’s what the head coach had to say.

Dwayne, how are you, what’s the latest?

Will you coach from afar on Boxing Day or give your assistants the reins?

DP: “It’s about them having the reins. I’ve heavily inputted this week with what’s going on, what we’ve needed to cover and so on. Because we haven’t had a game for so long, we’ve managed to have a good block of training and a lot of the work has been done for us. It’s been a good week, I’ve been keeping tabs on everything and the boys are itching for a game. It’s been so long since we’ve played so having a game is going to be huge for us.”

Is it extra frustrating for you to miss out considering all that’s gone on with quarantine and so on over the past few weeks?

DP: “Yeah, definitely. I’ve been looking forward to actually being a coach again on match day but it is what it is and I’m sure I won’t be the last, the way things are going at the minute. The boys are going well and it’s important for us that we can have a runaround and have a game.”

How’s the squad in terms of Covid and fitness in general?

DP: “We’ve been lucky so far, touch wood. There’s another round of PCR testing today so we’ll find out in the morning. We’ve been OK so far – we’ve managed to avoid all the Covid in Africa and having come back. The reality is there will be positives at some point, it’s just how we mitigate the risk. We’re trying our best to avoid it but, like our situation here, sometimes it’s inevitable. We’ll have to adapt and overcome when it comes to it. We’re doing the best we can in terms of our standards around the place.”

Is there added frustration of the game being behind closed doors

DP: “The reality is these games are the ones you look forward to as a player. I’ve been there as a player myself and the derbies around Christmas are always a special time for anyone. Not to have crowds is obviously frustrating. From a club’s perspective, it’s been voiced this week the damage in terms of financial rewards that (not having a crowd for) those games bring. There’s a lot at play in these games. From a playing perspective, we want to have crowds. I read something Lee Blackett at Wasps said, how much higher the intensity is with a sell-out crowd. We’re used to it, we played a season without crowds. It’s not ideal for anyone. Unfortunately, it is what it is. The big thing for us is that we prep well and, from a mental side, we’re switched on because they’re big games in the context of our season and qualification for Europe. There’s a lot riding on these games.”

No crowd but still plenty to get you going in a derby?

DP: “They’ve got a couple of ex-Scarlets – Kirby (Myhill), (Rhys) Priestland, Josh (Turnbull) as well, Will Boyde, Josh Adams – so I’m sure they’ll be up for it to play against us. We will be likewise. It’s been disappointing having four cancelled games. We felt we were in a good spot before November. The boys will definitely be up for it. I’d imagine both sides will be a bit rusty to start, that’s the reality of it, but it’s getting into it and having some games and competitive fixtures. For us, it is all about just getting on the field. We’re itching for a game. The important thing for us is to get a competitive fixture in.”