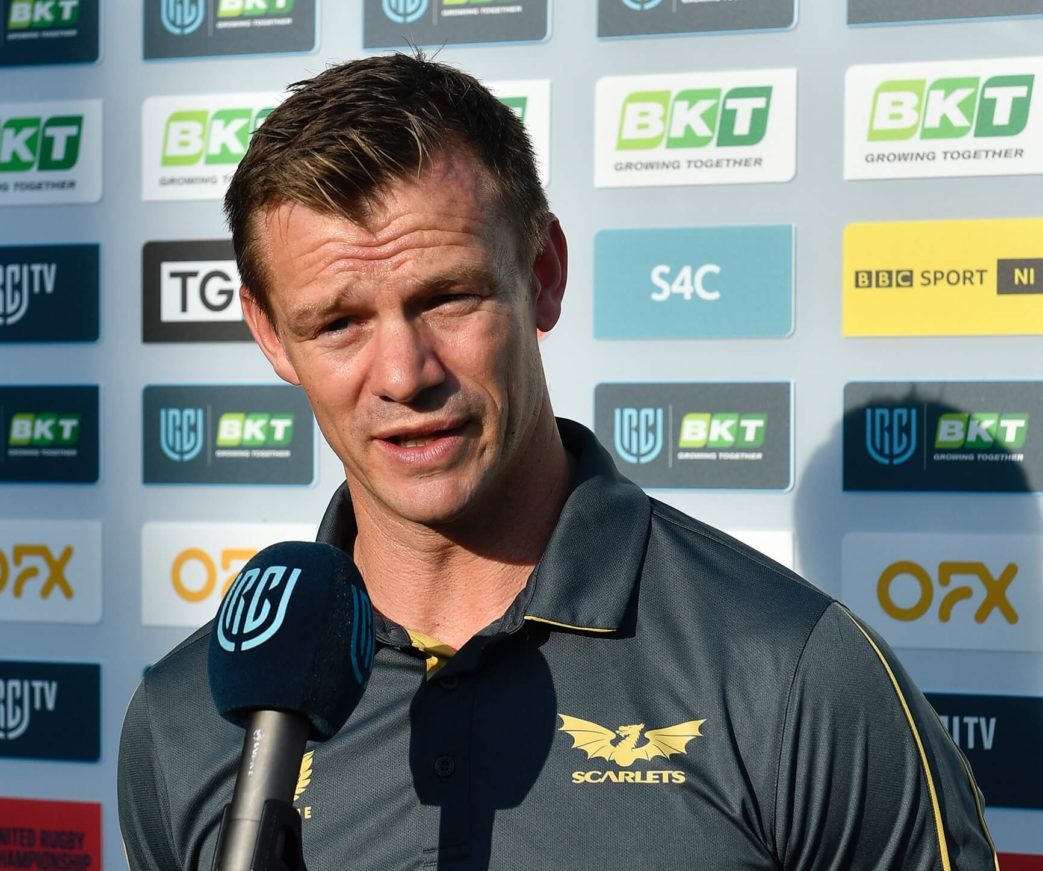 As his side prepares to take on the early BKT United Rugby Championship leaders Leinster on Friday night, Scarlets head coach Dwayne Peel spoke to the media to discuss the challenge.

Dwayne, what are your reflections on the defeat in Galway?

DP: “It was a tough one. I was disappointed after the game because in the first half we played against the elements, gifted them two tries, but I felt we had good fight and going in at 16-11 I was fairly content, because it was a close content and I felt with the conditions in our favour in the second half we could capitalise and kick on because when we got into Connacht’s territory we came away with points.. But we were inaccurate with our kicking and discipline. We have spoken around the game management stuff this week, accuracy in our kicking game and accuracy in putting pressure on the opposition and we were fairly critical around that area when we came in on Monday.”

What is feeling in the camp at the moment?

DP: “The reality is the block hasn’t gone where we wanted it to be. In terms of coming in and working hard and everything, the boys have been great. It’s just in those pressure moments, we haven’t been accurate enough, we haven’t managed to grasp the game when it’s been on the line yet. In terms of the group, they’ve worked hard and they’re together in this, we’re together in this, and we need to work our way through it. That’s the bottom line. Everyone’s on page with what we’re trying to do.”

What about this week’s challenge against Leinster?

DP: “I know all too well the depth and quality they have in the squad. We have spoken about that. We understand what is coming, we know they are a quality outfit and we know they have strength in depth, but we are confident we can get amongst them and try and upset them and that is what we will look to do this week.

What are Leinster’s strengths?

DP: “Efficiency, relentlessness, that is the way they want to play. They are based on momentum, like to dominate the gainline on both sides of the ball. Any side who have gone up and done well or beaten them have managed to control that, that is the challenge. We have to make sure we don’t give them everything they want here, but that is easier said than done. It is going to be a big challenge that we are looking forward to as a group.”

Do you have anybody coming back from injury?

DP: “Aaron Shingler and Tom Rogers are back in training and will be available. Carwyn Tuipulotu trained this week. I am hoping he will be back available for our South Africa trip, hopefully he can play a club game or two before that. It will be good to get him back because he really stepped up at the end of last year, he is a big ball carrier and a big man.  Over the next month there’s 12 to 15 players coming back from injury.”

Will you be having any of your Wales squad players back?

DP: “I don’t think anybody will be released.”