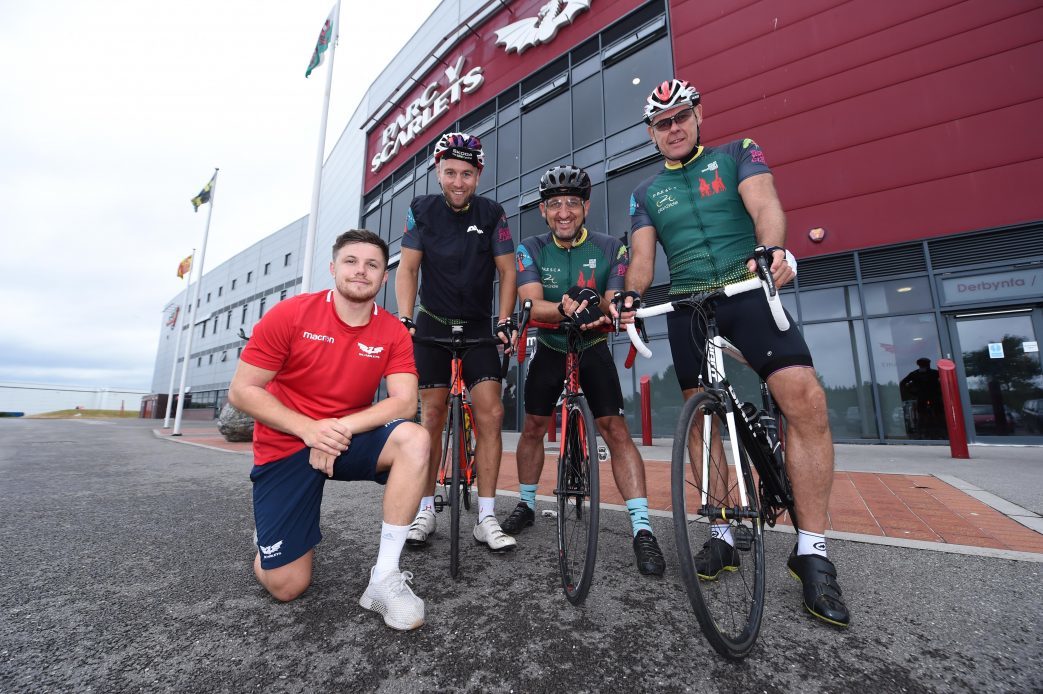 Welsh rugby’s finest – past, present and future – are behind a 195 mile, three day bike ride which is set to raise tens of thousands of pounds for the game’s main registered charity (WRCT) this weekend.

And the WRU’s incumbent Head of Participation Ryan Jones and current Wales forwards coach Robin McBryde are leading the way alongside a host of other Union staff, as well as a wide variety of contributors from the community game.

Eleven former Wales internationals in total join a further 27 riders from around the Welsh rugby family, including Huw Williams the father of the former Cardiff Blues and Wales centre Owen Williams who suffered a spinal injury in 2014, with all funds raised heading to the Welsh Rugby Charitable Trust (WRCT) which supports injured players.

The cycle challenge has become an annual fundraising event, last year raising in excess of £30,000 for the WRCT after a trip which navigated the length of the country, north to south.

This year the 195 mile or 313 kilometre trek traverses west and mid-Wales, starting in Llanelli and heading to Aberystwith on day one, before veering across to Brecon on day two and finally to Cardiff, through the Brecon Beacons itself and via Merthyr, on day three.

After reaching 472 metres above sea level at their highest point, the Elan hairpins in mid-Wales, and facing their toughest incline, an average 12% gradient near Builth Wells, the group will finish in the capital at approximately 4.30pm on Sunday 29th August, when Fran Bateman and Iwan Griffiths from the Charitable Trust join for the final leg on hand-bikes to be welcomed into Principality Stadium.

“We are all looking forward to three tough days in the saddle, it’s a pretty gruelling schedule we have ahead of us, but the WRCT is a thoroughly deserving cause,” said former Wales captain and lead rider Jones, who has become an amateur triathlete since hanging up his boots and joining the WRU as a senior executive.

“They say charity begins at home and there is nowhere closer to home for any member of the Welsh rugby family than an organisation like the WRCT.

“Rugby is a close community with a unique set of values and support network where team-mates look out for each other and build a camaraderie far beyond what happens on the pitch and it is heartening to see so many names on the list of riders for this weekend.

“If we can beat last year’s total and go past £30,000 for the WRCT, we will be making a truly invaluable contribution to the good work they do, so please dig deep and give what you can.”

A dozen support staff will also travel throughout the journey, with six mechanics and even a team masseuse trailing the group in three separate vans.

“The ride is in aid of the Welsh Rugby Charitable Trust which is an organisation established in 1972 to provide help to those players who have unfortunately suffered serious injuries whilst playing the game,” said WRU logistics manager Ann Hawkins, who has organised the fundraising campaign.

“The Trust helps provide support with rehabilitation, career advice, educational grants and retraining for injured players and has also paid for home adaptations, hoists, wheelchairs and specifically adapted cars to restore mobility and independence to the severely injured.”

Anyone wishing to contribute to the WRCT and support the riders’ fundraising efforts can visit https://www.justgiving.com/fundraising/ann-hawkins3 to make a direct donations, but there are also many riders who have individual justgiving pages, found via personal social media accounts, with all the money raised going to the same place and adding to the same ride total.

Dennis Gethin, OBE, the current President of the Welsh Rugby Union is the WRCT’s Chair and the Trust’s Patron is HRH Prince William, The Duke of Cambridge, its Registered Charity Number is 502079.