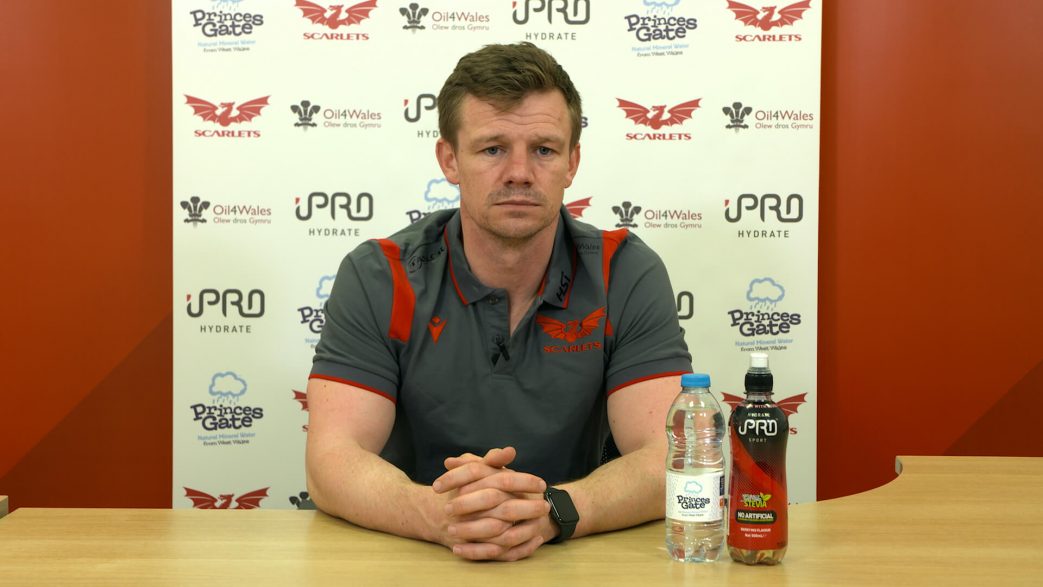 Scarlets head coach Dwayne Peel spoke to the media ahead of Saturday’s URC clash with Zebre in Parma. Here’s what he had to say.

Dwayne, how do you reflect on your South African experience?

DP: “From a touring experience it was a good tour, some of the young boys we have in the squad haven’t toured at all because of Covid, so for them to get away and get to know each other was great. Similarly for the staff, the beauty of touring is that you get that time and that small talk going, from that side of things it was good. I thought the boys trained particularly well and particularly hard, the weather was favourable as well.

“In the first game against the Sharks, we were more disappointed that we lost because we put ourselves in a position to kick on. As for the Bulls, we had spoken about the importance of the first 20 minutes; all the previous games, apart from ours against the Sharks, had been a quick start from the South African teams, but we weren’t accurate enough, we gave them an attacking scrum from the kick-off, we let them loose on kick chase, we were not accurate in our tackling on kick chase, dropped first-phase attack, it was a number of areas, one after each other which allowed them momentum and they are a top-quality side with some big boys up front. It was a tough day once they got their tails up.

“For me, it highlighted the importance of physicality and intent as well, they had great intent. From our perspective that is what we took away from the tour, the intent to carry and the intent in that contact area. When you play those sides that goes up a level, we had it in the first week, not the second. The ability to sustain that week on week is going to be the challenge. Having these four franchises in this competition raises the level massively, we have seen that from not only going to South Africa, but across the board this year, the intent, physicality and speed is going up and up and for us it is about staying on top of that.”

What about the next challenge?

DP: “We have a big block of games, going to Italy this weekend, then five derbies back to back. It is a huge challenge which I know the boys are excited about. It is about getting the mentality right after a trip away. We have come in, worked hard and made sure we got our focus straight back on competition. We realise the importance of going away there. The big thing is that our mentality is right and that we learn from last week and we start the game with intent.”

Any reinforcements coming back from Wales?

DP: We have a couple back, not all the boys, but guys who haven’t played as much and there will also be opportunities for guys who toured with us. We want to see guys given opportunities over this period, young players have put their hands up over the course of the last six to eight weeks. We are conscious of the squad getting stronger and these boys are pushing for those starting spots.”

What is the latest on Samson Lee’s injury?

DP: “It is going to be a long-term one for him. He will have an operation on Friday. We are not expecting him back well into next season. An injury does give an opportunity to someone else. You look at some of our front-rowers who have had good opportunities and performed well, the likes of Harri O’Connor, Steff Thomas, Daf Hughes, Shaun Evans, Kemsley Mathias, those guys are stepping up to the plate. You only get better when you play rugby.”