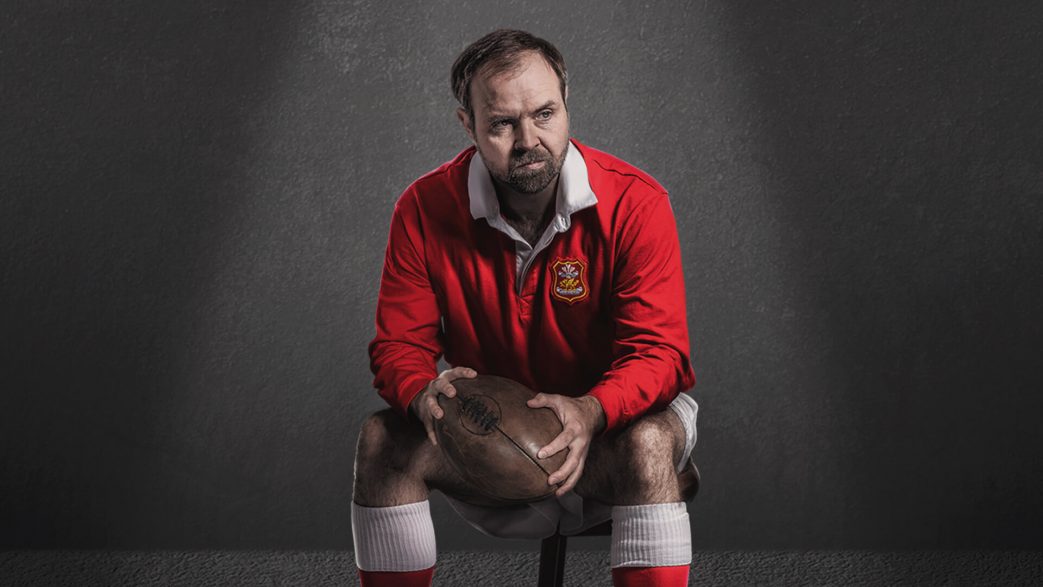 “The most important thing for me is that we pay tribute to Ray and remember him in the right way.”

Actor Gareth John Bale will play the lead role in a special S4C film which pays tribute to one of the giants of Welsh rugby, Ray Gravell.

To mark the day that Ray would have turned 70 years old, on Sunday 12 September at 9.00pm, S4C will show Grav – a film which tells the story of his life and looks back on the events that shaped his unique personality. English subtitles will also be available with the film.

Having performed the one-man show over a hundred times across Wales, the UK and the US, a cast of actors will join Gareth John Bale for this screen adaptation.

Gareth said: “There are elements of happiness and sadness in the drama, that is what makes it so special. You could imagine Grav saying it himself, that there were some players who wore the red jersey who were better than him – not many, but a few.

“But in terms of their life stories, there isn’t as much to tell, and Grav was certainly someone who wore his heart on his sleeve. The drama does look at some sad moments, moments which had a huge impact on him. But we also celebrate his life and there is a lot of comedy there too. There were peaks and troughs in his life, but that’s who Ray o’r Mynydd was.

“Instead of me trying to make some kind of caricature, I have always tried to capture his spirit. That is what’s important to me, that Grav’s spirit comes through. I don’t think anyone would watch me and think, ‘he looks exactly like Grav’. But what people have said is, ‘you have captured him, you have captured his spirit.’

“The most important thing for me is that we pay tribute to Ray and remember him in the right way, but also that his family is happy with it. That is so important to me and to everyone else, and I am so grateful for their support over the years.”

Despite his extraordinary contribution to Llanelli rugby club, Wales and the British and Irish Lions, Grav was also famed for his work off the pitch during a successful career as a commentator, broadcaster and actor. As a young actor, Gareth was fortunate enough to work with Ray on S4C series, A470.

Gareth added: “By then, Grav had worked with the famous director Louis Malle, and actors like Juliette Binoche, Jeremy Irons a Peter O’Toole. His acting CV was much bigger than mine. But he always said, ‘You’re the expert, you tell me what to do.

“I remember during one break, we were sat around a table. Some of the young actors knew who he was, but they tried to get it out of him. I remember him saying to them, ‘Well, I used to play a bit of rugby.’

“Alun ap Brinley shot out of his chair! ‘A little bit of rugby? Boys, this is a British Lion!’ he said. But Grav didn’t want to say that himself and he never talked himself up. I only worked with him for three days, but like everyone who met him has said, it was just a pleasure.”