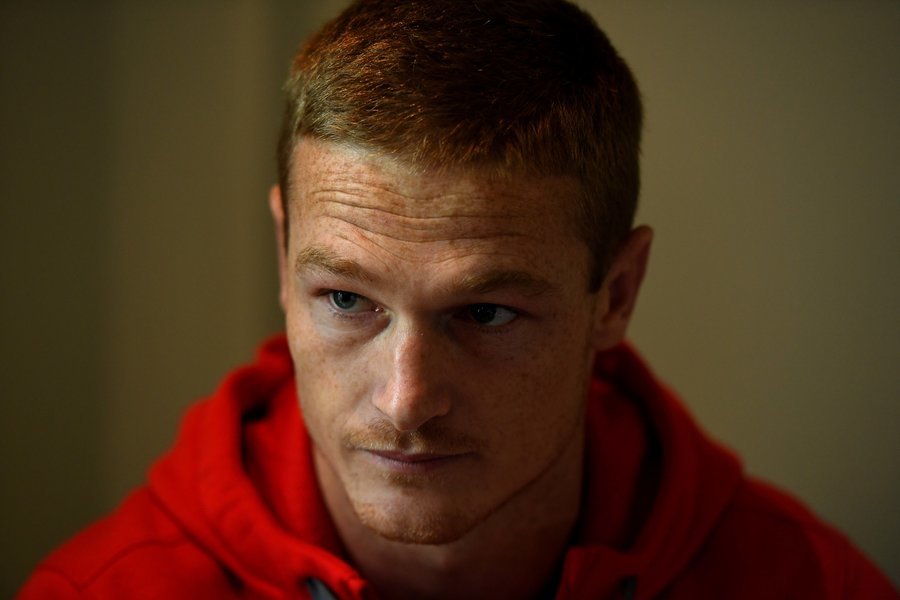 Johnny McNicholl will be primed and ready to belt out ‘Mae Hen Wlad Fy Nhadau’ this afternoon ahead of his first appearance with the three feathers on his chest.

The Scarlets favourite will be wearing a different shade of red this weekend after being named in Wayne Pivac’s Wales side to take on the Barbarians in an uncapped international at the Principality Stadium.

Johnny, who arrived from the Crusaders in 2016, qualifies for Wales on residency after three stunning seasons in West Wales with the Scarlets.

A player with X-factor ability, he is a proven gamebreaker and try-scorer and is hoping to deliver the same qualities on the international stage as he has done with the Scarlets.

As for the other challenge, Johnny has been given some expert tuition from team-mate Steff Hughes on learning our national anthem.

“Yeah, Steff Hughes is the main man there,” he said, speaking to the media ahead of today’s game.

“We’ve been going at it a good couple of months now; I was just hoping that if I did get this chance to play, that I knew it well and I can do the anthem proud.

“It is not a language that I know so the pronunciation is very hard for me. Steff has been very good for me in that department by writing it down how it is written in Welsh and then writing how I might say it in English.

“That way it is a bit easier for me to learn and I am really looking forward to trying to belt it out on Saturday.

“I almost know it off by heart and the last line is all I have to nail down now and I should be done by game day.”

Asked if playing for Wales was the target when he first arrived in Llanelli, Johnny added: “It was a long-term goal in my head in my personal ambitions, but I didn’t want to say it at the start because I only had a two-and-half-year contract with the Scarlets and I didn’t know how things were going to go when I first got here.

“But then once I signed again for the Scarlets for another three years I knew then that I could publicly announce it was my goal to play for Wales.

“I love the place. Family is coming along well, I’ve got one daughter born here, one on the way, we’ve settled in very well, it feels like home.

“I’ve got plenty of lingo, plenty of banter from the Scarlets boys and everyone was very welcoming from day one, it’s felt like a good welcoming environment since I’ve been here.

As for his own form, he added: “I’ve played in every game for the Scarlets, I’ve got three tries so I’m pretty happy.

“We’re going quite well, winning those narrow victories and good teams seem to pull away off those so I’m very happy with the results so far.”

And his future goals?

“I just play this game one at a time. Once this game is over I will celebrate it and I will go back to the Scarlets and play the best rugby I can.”