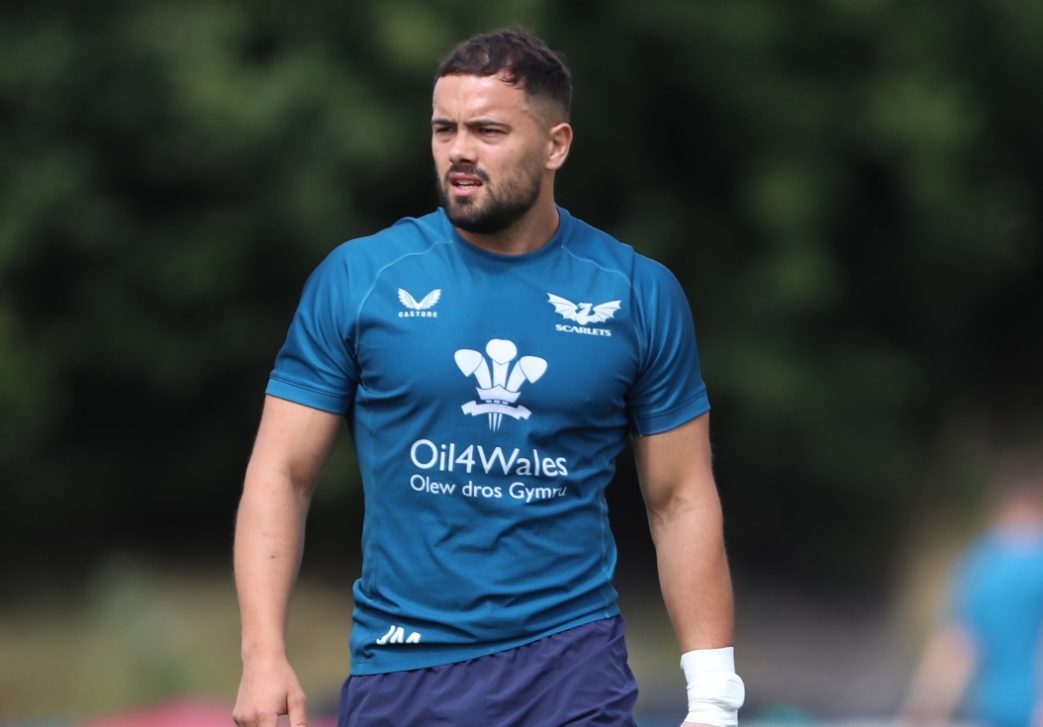 Josh Macleod runs out for his 100th Scarlets appearance this afternoon, a milestone he feared he may never reach.

Blighted by a catalogue of serious injuries, the openside has been stuck in the nineties for longer than he can remember.

But now returned to the No. 7 jersey, Macleod has been back making his trademark turnovers and putting in his trademark defensive shift — no player in the URC made more tackles in round two.

“I have been stuck on 90 for about four years with all these injuries going on,” he joked ahead of today’s round three clash with Benetton in Treviso. “At one point I thought that is where I’d stay!  It is obviously nice personally, but for me it is team first and that is the only concern. If we get a nice win, maybe I can celebrate both.”

Macleod is still only 25 having made his debut in a pre-season friendly against Bedford in 2015 and a league bow against Munster the following year.

And much to his credit, he isn’t keen to linger on the injuries, adopting the forward-looking rather than reflective approach to the last few years.

Inevitably, though, every media interview he does leads him back to that fateful week before Wales played Scotland in the 2021 Six Nations, having been days away from his first Wales cap only for Lady Luck to take a sabbatical.

Maleod snapped his Achilles tendon in a training session, sidelining him for six months. Two hamstring injuries followed, as well as a shoulder issue that needed surgery over the summer.

“I’ve had a bit of a tough stint, but that is part of sport, I took a knock on my shoulder after coming back from my hamstring, managed to play through it, got that fixed up over the summer and had a decent bit of pre-season so I was able to get back in the mix from the start. It has been good to get flowing straight away,” he adds.

As for being so close to his international cap, he said: “It wasn’t meant to be. You just keep moving on, first to get back on the pitch, get back running, there are always progressions, fair play to Matt Evans (Scarlets head of return to performance), he has been quality, although he is probably sick and tired of my face, as are the physios here.

“The body was a little bit beaten up after the first game back against Ospreys; I was a little bit better after Ulster and I am feeling good. I am probably not 100% match fit yet, but in time that will come. It is about game time for me now and my focus is very much on the Scarlets and winning games. We have got Treviso this weekend and that is the number one priority.”

With the Ospreys snatching a late draw in round one and Ulster claiming the spoils last weekend, there has been plenty of frustration in the camp after the opening fortnight, even though the Scarlets have displayed enough to encourage their fans with ball in hand.

Macleod added: “From a team point of view we were gutted with the draw against the Ospreys. We have also had a couple of good, stern chats — our defence coach Babs (Gareth Williams) has been pretty tough on us because it is not acceptable to be conceding 55 points at home. We shouldn’t be scoring 39 points and losing a game. We have taken it on ourselves as players to be better, we have worked hard on it and are looking to rectify it on the weekend.”

As for being part of a back-five unit that contains ‘freestyle’ crowd-pleasers such as Vaea Fifita, Sam Lousi and Blade Thomson, Macleod smiled: “Those boys are a lot better than me at shifting the ball and off-loading and all that carry-on. I’ll look to try and get my head stuck in a ruck, hopefully win the ball and let them do the flashy stuff.

“We are renowned as being that fancy team, but what we are driving as a squad is the nuts and bolts, the basics, fundamentals. If we get that right it allows us to then play with the superstars we have in the team.”