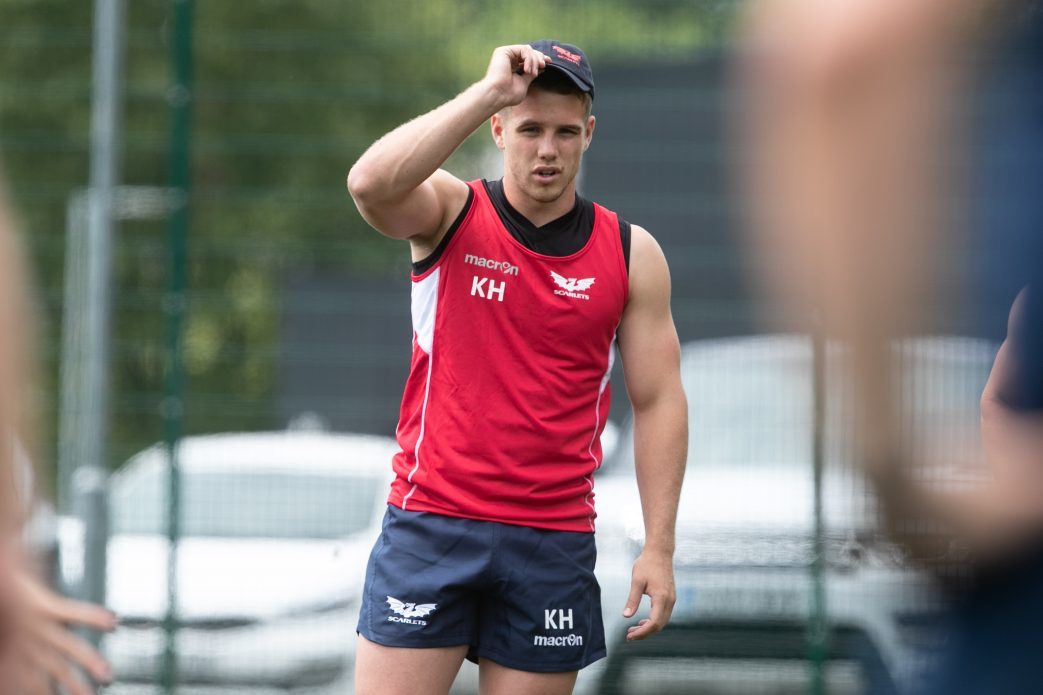 It hasn’t quite been the pre-season Kieran Hardy had hoped for, but the Scarlets scrum-half is determined to hit the ground running when the new Guinness PRO14 campaign kicks off in September.

Hardy enjoyed an outstanding 2018-19 following his return home from a couple of years playing with English Championship side Jersey Reds.

He picked up the Crys 16 Supporters Trust award for the breakthrough player of the season, scored the Scarlets’ try of the season and was being talked about as a potential international bolter after a string of eye-catching displays in the No. 9 jersey.

However, just a few days into the pre-season schedule, after feeling pain during training, he was rushed into hospital to have his appendix removed.

The 23-year-old Pontyberem product is now easing himself back slowly at Parc y Scarlets and looking forward to what promises to be an exciting campaign under the guidance of new head coach Brad Mooar.

“I had a couple of days of training  and then my appendix gave way so I am on the touchline for a bit, managing it week by week. Hopefully I will be fit in a couple of weeks and back in training,” he said.

Hardy is hoping to be given the green light to head out to Jersey to take on his former club for the Scarlets’ pre-season opener on September 7.

“Playing against them will be a bit different, but it will be a good match and I am sure the boys will enjoy it.

“I had two really good years at Jersey, I learned a lot about my rugby, had the opportunity to play every week at a challenging standard and came away a better player.

“It was a big move for me; probably the best thing I ever did looking back. It was a case of whether I could sit around here and wait for my chance or do it the hard way and I came through in the end.

“It is nice to come back home and I am focused on doing a job here now.”

Reflecting on last season, Hardy added: “Ultimately, it wasn’t our best season as a team, we all knew that deep down and this year we want to push for bigger things.

“Personally, I was pleased with how it went, my aim was to play as much as I could, express myself and show everyone how much I thought I had improved.”

With Gareth Davies likely to be on Rugby World Cup duty in September and October, opportunity is knocking for all of the Scarlets scrum-halves at the start of the season.

Hardy added: “Jonny (Evans) is fit and back and Dane (Blacker) has come from the Blues, but that competition only makes us better players.

“It is good to have those players in the environment, where it is just pushing the standards for everyone. The more competition you get, ultimately the better side you get on the field

“It is a smaller group, but it feels like a really tight group – we need it to be. We are going to be without the internationals for the first couple of months and they will be away again in the Six Nations. This group has a big role to play in our season.”