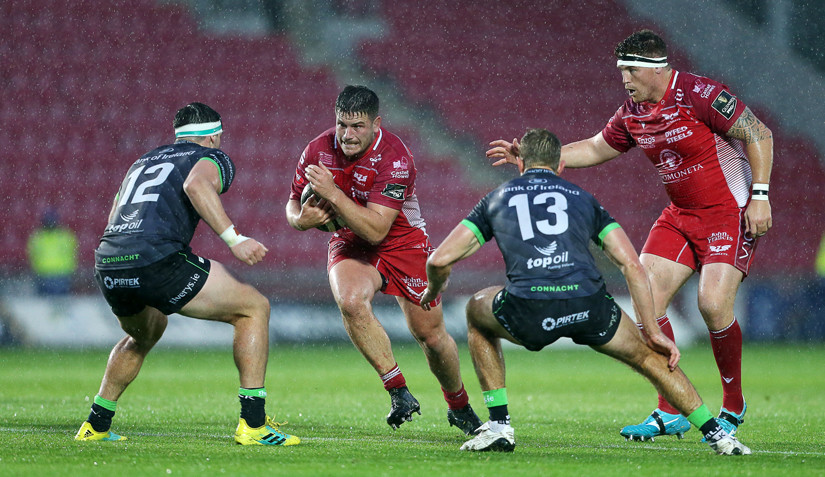 Ahead of Friday night’s round two Guinness PRO14 clash with Glasgow Warriors, Scarlets hooker Marc Jones spoke to the media.

Here’s what the 32-year-old former Sale and Bristol forward had to say as the side looks to build on last weekend’s impressive opening victory over Connacht.

That was a big result to start, there must be a great atmosphere within the squad after Saturday’s win?

MJ: It’s been a good, it is nice to get that first win under our belt to kick-start us during this period before the boys come back from the World Cup.

It was a tough game, Connacht aren’t missing too many boys, but big respect to the players, we fronted up well in difficult conditions and there is a real feelgood factor around the place at the moment..

With so many players missing on World Cup duty and a new coaching team in charge, has there been much disruption in the build-up to the season?

MJ: There has been no disruption at all, to be honest.

Brad has come in, he has a group of players he knows that he will be going to be working with in the first five to six weeks, maybe more. We have been in early, had a lot of prep leading into the season and had some really good off-field, team bonding stuff, it feels like a really close squad.

What has Brad brought to the environment?

MJ: Personally, I feel  it is very relaxed which enables the players to express themselves on the field. We turn up to training, there is music playing and there are smiles on people’s faces. Pre-season has been tough, it has been long, but really enjoyable. Brad has brought in some new ideas and whenever you get new ideas it engages you as a player.

The Scarlets have a knack of producing hookers, have you been impressed by the talented youngsters coming through at the moment?

MJ: There are some great young hookers here, Daf Hughes, Taylor Davies, Dom Booth and Shaun Evans who has transferred from the back row, that is only going to be good for the Scarlets in future years.

What are you expecting from Glasgow after their loss to the Cheetahs in round one?

MJ: “They are a tough team, especially at home where they have a proud record at Scotstoun. After coming off a defeat like the one against the Cheetahs (48-14)  they are going to come out firing. If we were in their situation, I am sure we would be coming out hard early on. We are expecting a big backlash and we know we have to play for 80 minutes to get a result. For us, it is about doing our roles individually and collectively and hopefully the result will come off the back of that.”