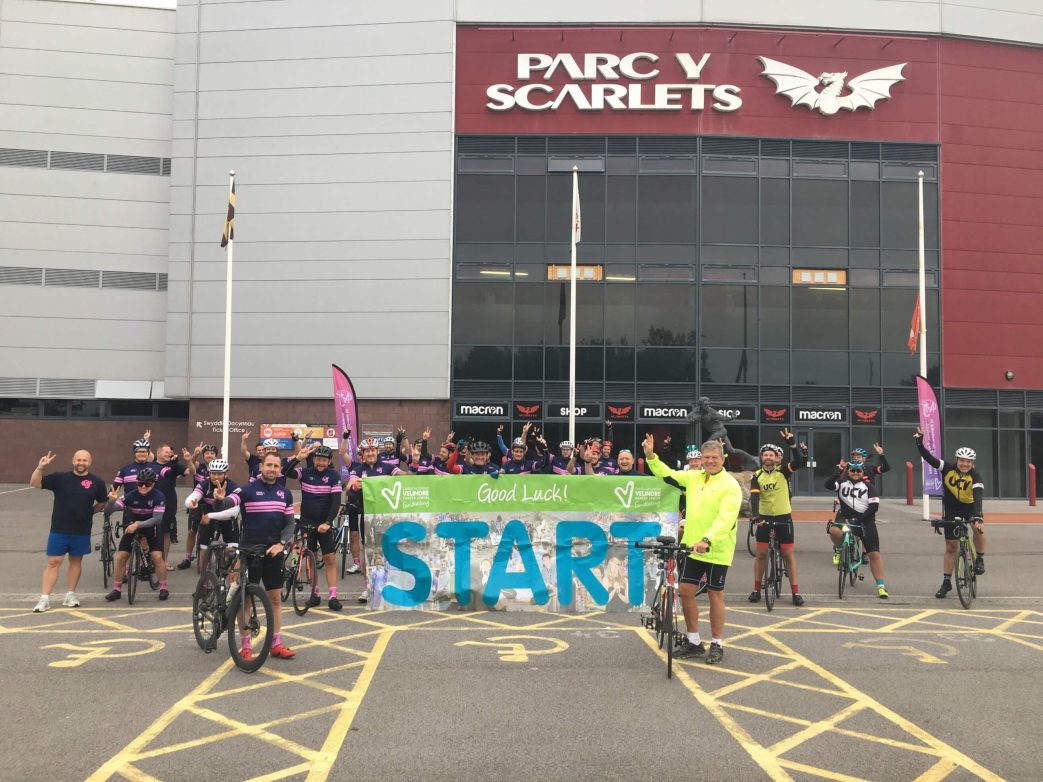 Friends and team-mates of former Scarlets centre Matthew J Watkins headed out from Parc y Scarlets this morning for the start of a 150km cycle ride in aid of the Velindre Cancer Centre.

The ride takes place on what would have been MJ’s 42nd birthday with Wales great Shane Williams among those taking part.

En route they will be visiting some of the clubs at which MJ played and some of the venues that he graced. From Parc y Scarlets they are heading to the Liberty Stadium and then onto the Principality Stadium, Rodney Parade and Pontllanfraith’s Welfare Ground before finishing at Oakdale Rugby club, where Matthew’s sons now play and where he used to coach.

The riders are looking to raise £10,000 for Velindre and even before they push a pedal they are 88% towards hitting their target. Matthew was treated at Velindre and did a number of charity events to help support the centre.

“Over the last seven years, Matthew inspired so many of his friends and family to take on challenges and support charities, in particular Velindre Cancer Centre, which were very close to his heart,” said ride organiser Gavin Bennett.

“Some of us were lucky enough to experience some of these life changing events with him and meet some truly inspirational people. So, in true MJ fashion, we’re not going to sit on our backsides and mope about his loss, but do something positive that I’m sure he’d appreciate.

“We organised this ride as a way of remembering our special friend on his birthday and to raise awareness and, hopefully, lots of money for Velindre. It was really important to him.”

Former Llanelli and Wales coach Gareth Jenkins was the man who brought Matthew to Stradey Park, with the centre going on to play 150 matches over six seasons between 2002 and 2008.

“Matthew approached his illness with the same determination as he had been as a player. It was so sad that he was to pass at a time when we were unable to pay the kind of tribute which Matthew richly deserved,” said Gareth, who joined the riders for the first stage from Parc y Scarlets.

“It is a huge testament to Matthew, the person that his friends are undertaking this charity cycle ride for Velindre Cancer Centre, to honour his memory. We are all thinking of Matthew’s family at this time, his wife Stacey and his two cherished boys, Siôr and Tal.”

Kylie McKee, deputy head of fundraising at Velindre, said: “Raising money for Velindre was really important to Matthew as it was his way of giving something back.

“He did our Boston to New York bike ride in 2014 and then our San Francisco to LA bike ride in 2018 – and having him on the rides really made a difference as he was such a big character and always so positive.

“He did numerous golf days, rugby dinners, lunches and so much more to raise whatever he could for the charity, so the boys organising this fundraising ride to raise funds for Velindre on his birthday really is a fitting tribute.”