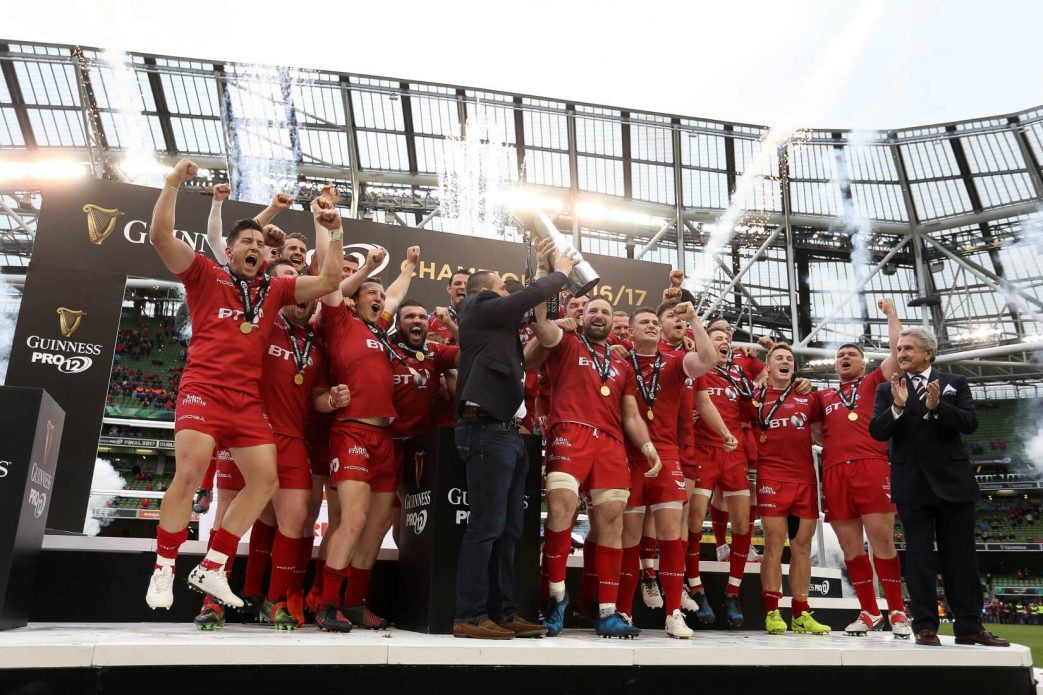 It was a day that will live long in the memory of each Scarlets fan in Dublin’s fair city.

Eight days earlier, just a drop kick down the road from the Aviva Stadium, Wayne Pivac’s side had stunned Leinster at their RDS fortress, becoming the first away side to triumph in a semi-final of the competition.

And playing with the same sizzling swagger and verve, the Scarlets did it again, running in six tries to produce a sensational record-breaking victory over Munster.

Heavily outnumbered in the stadium, it was the voices of the thousands of travelling Scarlets who could be heard long after the final whistle as stand-in captain John Barclay and Ken Owens took to the podium to lift the Guinness PRO12 title amid jubilant scenes.

Despite heavy rain for most of the day, a Scarlets side oozing confidence defied the damp conditions to stay true to their slick wide game philosophy, looking to stretch Munster at every opportunity.

It was the Irish province who took a seventh-minute lead through a Tyler Bleyendaal penalty, but that was as good as it got for the pre-match favourites.

Liam Williams dived over for the Scarlets’ opening score after a perfectly-weighted cross-kick from the measured boot of Rhys Patchell, then Steff Evans – cleared to play following his semi-final red card – finished off one of the great final tries.

Turnover ball and some sharp passing across the line freed Jonathan Davies and he and Evans exchanged passes to bamboozle the Munster cover.

It got better quickly when Scott Williams scythed through a gap to free Gareth Davies on his inside before Tadhg Beirne powered and twisted his way over from close range, all before the clock had ticked over the half hour mark

A Bleyendaal try on the stroke of half-time ensured there was no complacency in the ranks, but Munster’s expected resurgence never materialised as the Scarlets’ defence took centre stage.

A Patchell penalty extended the lead shortly after the restart, then with 11 minutes remaining DTH van der Merwe cut inside and fended off some dispirited defence to put the result beyond any doubt.

Andrew Conway and Keith Earls touched down for late consolations for Munster, but the final word was the Scarlets’ as the outstanding James Davies raced away from halfway and Liam Williams, in his final game before moving to Saracens, converted to prompt wild Scarlets celebrations in the Irish capital.

Man of the match: Aaron Shingler