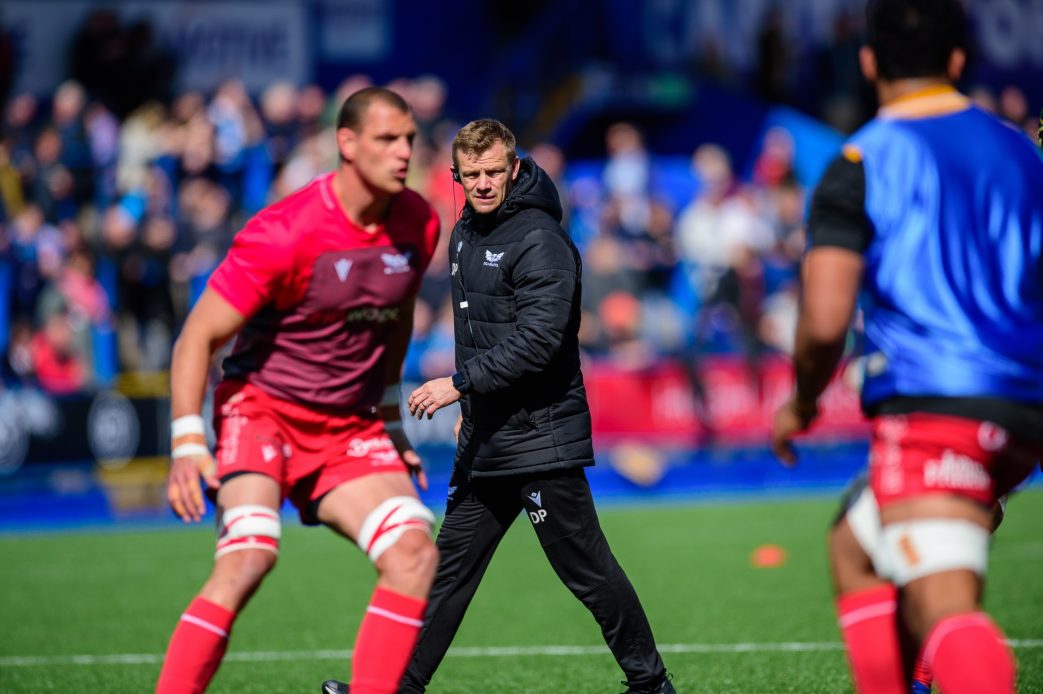 Scarlets head coach Dwayne Peel spoke to the media after Saturday’s 49-14 victory over Cardiff at the Arms Park. Here’s what he had to say

Dwayne, you must be delighted with how you turned that around?

DP: “Yes, it was very pleasing. It would have been easy for the dam to break when you are under the pressure we were in the first 20 minutes, but it didn’t break. We grew stronger as the half went on, I thought we bombed two opportunities, Si’s knock-in and when Foxy went through, if he had gone outside Johnny was in the clear. From my perspective, the fact that we weathered that storm was huge. The wind was strong, you could see that from the kicking so at half-time it was about being calm. At half-time I felt we were 10% off everything, we were second to the body height at breakdown, didn’t have enough punch in the carry, and our line speed wasn’t there. We also slipped off a couple of tackles and got beaten to a few rucks. From there on in, we had the bit between our teeth and were pretty good in the second half.”

You have three wins from your last three matches, it feels you have real momentum at the moment?

DP: “Momentum is huge in this game. We want to climb the league. Apart from the Bulls result, where we got pumped in all honesty, we have had consistency and a level of performance which is what we are after. If we have that, results tend to come. I would say the squad  effort is big here, there is pressure being put one each other every day. This week Blade, Tomas and Morgan Jones missed out due to Covid, but we had Shings coming back from an injury, Josh Macelod, Dan Davis stepping in and performing, that is what we want.”

Is the top eight the goal now?

DP: “It has always been a goal. We knew we haven’t had any consistency in our season, it has been all over the place. Personally, I wanted a run of games to see where we are at. In all honesty, we are eight months into a project, we need to get better, we need more consistency in what we are doing. I am passionate about where I want the club to go and the play-offss is the challenge for us, but it is about performing each week and the boys driving that.”

You seem to be developing a lot of competition for places?

DP: “The level of togetherness we had today was good, we played for each other which is important when you are playing for a club like the Scarlets. We want to grow real competition and depth. You look at someone like Shaun Evans, who has been outstanding these last few weeks. He was nowhere in the mix, he has played four or five games at seven for us, He is from Llanelli, he  loves the club, to see him put in performances, week in week out, really pleases me, that is what I want to see.”

How are Johnny McNicholl and Wyn Jones?

DP: “Both came off with knee injuries, we will wait and see this week.”

How did you think Liam Willaims performed?

DP: “It’s important for him to finish his Scarlets career in the manner he’s always played in. He’s a tough cookie, got great skills, and what people will remember is, yes he’s a fantastic player, but he’s got edge about him. I want to see that edge and he showed it.”