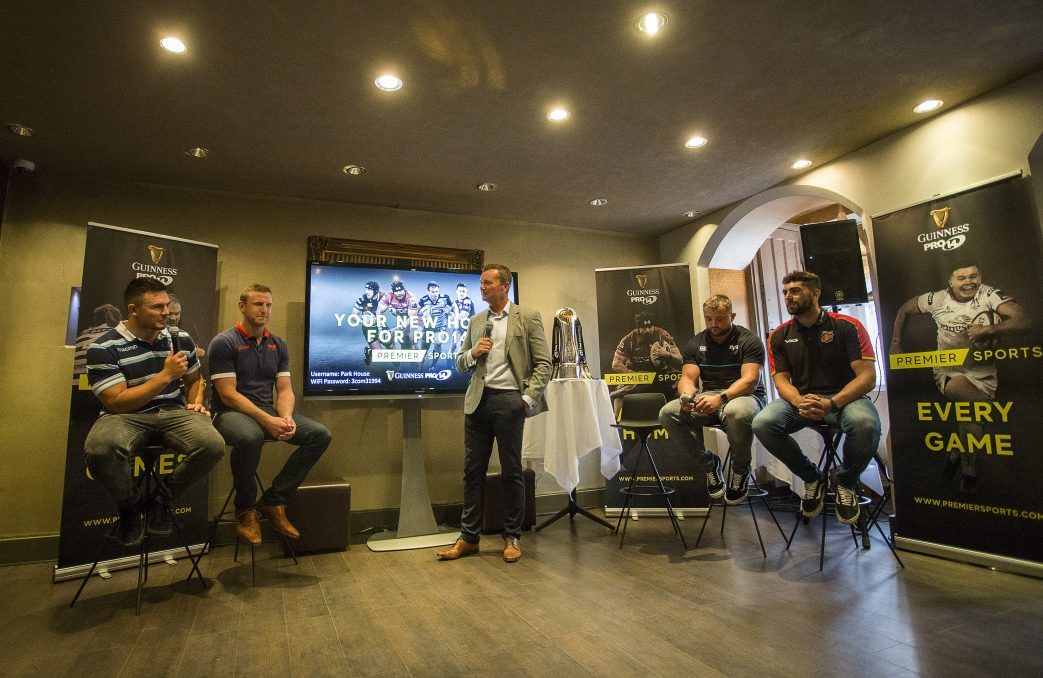 Premier Sports, the new home of every game in the Guinness PRO14, has announced a stellar line-up of respected rugby names to join its broadcast team in Wales for an exciting new season of rugby action.

Just a fortnight after announcing it had awarded its multi-million pound production contract to experienced independent TV sports producer Sunset+Vine, Premier Sports has unveiled EIGHT of Welsh Rugby’s most popular and trusted rugby experts for their coverage

Premier Sports is delighted to announce that Welsh Rugby’s great Shane Williams will be joining the Premier Sports team to feature on some of Welsh professional rugby’s most exciting encounters of the 2018/19 Guinness PRO14 season which kicks off in just over two weeks.

And after announcing his retirement from the game in July, with an illustrious career that includes 74 caps for his country with a record 49 as captain, Sam Warburton will be joining Premier Sports as a guest for some of the biggest fixtures during the season, including the Welsh Derbies and the season opener between Cardiff Blues and Leinster on Friday 31st August at Cardiff Arms Park.

The line-up in Wales will be joining Northern Ireland’s team of Andrew Trimble, Mark Robson and Graham Little announced last week with more high profile names to be announced for TV teams in Scotland next.

Shane Williams said: “This is an exciting time for the Guinness PRO14 and the Welsh regions in particular. It’s an honour to be a part of Premier Sports inaugural coverage of the Championship and I’m really looking forward to what should be a thrilling and hard-fought season.”

Martyn Williams said: “Having played in the Guinness PRO14 at its inception as a player, it’s been fantastic to see the Championship grow year-on-year and become a truly world class competition. It is a privilege to be part of Premier Sport inaugural season of coverage and I can’t wait for the it all to begin.”

Ross Harries said: “Over the past seven years, I’ve been privileged to stand pitch side and watch some of the finest players in the world do battle. During that time the Guinness PRO14 as evolved and grown, and it’s no surprise that the Championship now contains both the Champions Cup and Challenge Cup winners. Few things inspire as much passion as rugby in Wales, and I can’t wait to be a part of this exciting new chapter in the Championship’s history.”

The team will be working with Sunset+Vine, part of the Tinopolis Group (headquarters in Wales) – and is one of rugby’s most experienced and creative independent production companies with a track record that includes seven years of Aviva Premiership coverage with both ESPN and for the past four years, BT Sport.

Sunset+Vine’s three year deal will see them produce more than 200 hours of live rugby coverage for Premier Sports each season including the annual showpiece final at Celtic Park in May 2019.

Premier Sports has signed a landmark three-year deal with PRO14 Rugby to show all 152 games live each season across the UK including Northern Ireland. The season kicks off on 31st August with all seven games live on Premier Sports and Free Sports on the opening weekend.

Premier Sports is available in 16 million UK homes across Sky and Virgin platforms and to everyone via the Premier Player https://www.premierplayer.tv/ while FreeSports will be available to 22 million UK homes this season across seven different platforms.

Richard Sweeney, Chief Executive of Premier Sports said: “We are broadcasting a Championship full of world-class players, with a team of talent that reflects the ambition and class of the Guinness PRO14. We are delighted and excited to have secured experts at the top of their game talking up one of the most exciting club rugby competitions in the world.

“Premier Sports will be broadcasting every game live which will mean more people have access to the whole picture of rugby across the Guinness PRO14 Championship – that’s more than ever before all under one roof with a mix of match action and news across Premier Sports 1 & 2 and FreeSports.”

Martin Anayi, CEO of PRO14 Rugby, said: “There are few countries in the world that live and breathe rugby like they do in Wales, so it’s fantastic to see the talent assembled by Premier Sports to front their Guinness PRO14 coverage is headlined by a stellar trio of British & Irish Lions alongside faces and voices so familiar to the Welsh public.

“To see Sam Warburton join Shane Williams and Martyn Williams on Premier Sports is hugely exciting, these are former players who know what it takes to win at the very highest level for the Lions, Wales and in the Guinness PRO14.

“Eddie Butler’s voice is synonymous with iconic moments in rugby and to have him in the Guinness PRO14 will add an extra level of aura to the Championship’s broadcasts. Ross Harries, Sean Holley, Lauren Jenkins and Wyn Gruffydd are among the best broadcasting talent in Wales and it’s hard to think of a more complete team to deliver the in-depth coverage that Premier Sports and Sunset+Vine will bring to the Guinness PRO14.

“Following on from Premier Sports’ announcement in Northern Ireland and what is still to come in Scotland, these are incredibly exciting times for the Guinness PRO14 where fans across the UK will now be able to watch all 152 games for the first time.”

Cerith Williams, Executive Producer Wales, for Sunset+Vine said: “It’s going to be a thrilling new season of rugby as the Guinness PRO14 Championship goes from strength-to-strength and our rugby coverage will reflect that ambition. We want to deliver programmes with a modern, sophisticated take on rugby, with high quality match coverage, that’s visually stylish and insightful, original and with eloquent analysis.

“It’s vital that we engage with the many thousands of loyal and knowledgeable rugby supporters in Wales who support the Guinness PRO14 with a talent team that is passionate about Welsh Rugby, informed, honest and enjoy what they do. Our viewers will expect good editorial judgement in a fast-paced environment.”