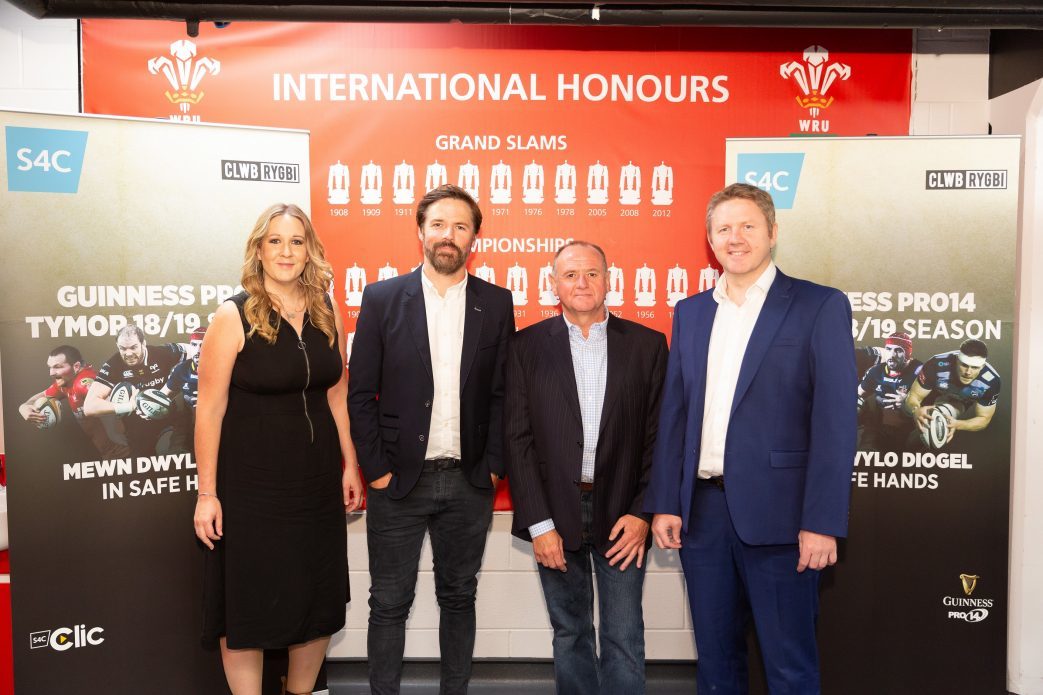 S4C’s Chief Executive says the channel is the “leading broadcaster of Welsh rugby”, as the channel unveils its presentation team for its flagship rugby series ahead of the new season.

The broadcaster recently acquired rights to show Guinness PRO14 matches in Welsh for the next three seasons. The new agreement means that S4C is the only ever-present broadcaster since the inception of the Celtic League in 2001.

A total of 17 live Guinness PRO14 matches will be shown during the season, including Christmas and New Year derby matches and, should a Welsh region be involved, live coverage of the Guinness PRO14 final. Further coverage will also be available on an as-live basis. Matches will be broadcast live on television and online via S4C Clic which includes exclusive 35 day catch up. BBC Wales will continue to produce Clwb Rygbi on S4C’s behalf.

The continuing coverage of the Guinness PRO14 is part of S4C’s extensive and ever-growing rugby portfolio, showing rugby at all levels: from college and regional youth rugby, to age-grade international matches, to Principality Premiership and domestic cup competitions, to international matches from the Wales men’s and women’s teams.

Owen Evans, S4C Chief Executive, said: “Rugby is part of the fabric of life in Wales and our passionate country is well-known across the globe as one of the game’s main exponents. S4C are proud supporters of Welsh rugby at every level and we offer an unrivalled portfolio as a leading broadcaster of Welsh rugby.

“The Guinness PRO14 is the main battleground for our four Welsh regions, and I am delighted that as a Welsh broadcaster, we are able to offer free-to-air coverage of one of the world’s leading rugby competitions. As a broadcaster who has been there since the Celtic League began, viewers know that they will be in safe hands with our Guinness PRO14 coverage.”

The presenting line-up will be introduced to the press during S4C’s Clwb Rygbi launch at the home of Welsh rugby, the Principality Stadium, on Thursday afternoon, 16 August.

Clwb Rygbi anchor presenter, Gareth Rhys Owen, said: “The Guinness PRO14 is one of the most exciting rugby leagues in the world and I’m looking forward to bringing fans all of the drama on Clwb Rygbi. We’ll have the match action, discussion and analysis from our presenters and distinguished panel as we watch the teams battle it out in what is certain to be a thrilling competition.”

Martin Anayi, CEO of PRO14 Rugby, said: “From the very beginning in 2001 S4C have been on the journey with us as a Championship that has seen many great moments, including six titles for the Welsh regions and an incredible evolution in the shape of the Guinness PRO14.

“To maintain that relationship is worth a great deal for everyone involved in the tournament, Welsh rugby and indeed, S4C. To provide Free-To-Air coverage with Welsh language commentary was a key goal for us when setting out our ambitions for the next three years and we hope the Welsh rugby public are just as excited about that.

“The Guinness PRO14 is a very different beast to what it was 17 years ago when the Championship took its first steps, as the tournament has grown S4C have been there every step of the way and we’re delighted they will be working with us as we write the next exciting chapter.”