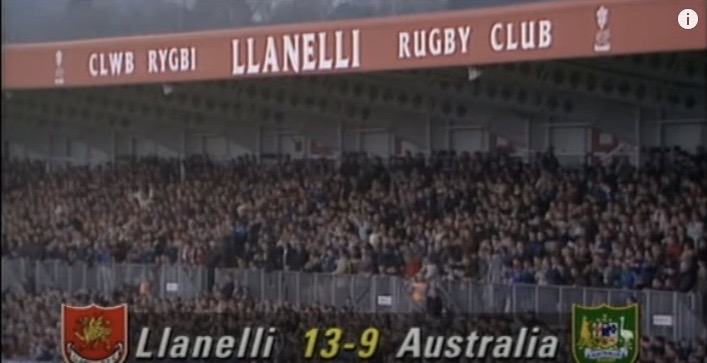 Memories of our stunning 1992 victory over the touring Wallabies will be rekindled this weekend when S4C take a trip down memory lane to Stradey Park.

The 13-9 triumph over an Australia side that had crowned world champions a year earlier remains one of the great moments in the history of the Scarlets jersey.

“Gareth’s mantra was always to keep the ball alive, but while we were renowned for our that style of play, that afternoon owed a lot to an ability to just guts it out,” recalled captain Rupert Moon in an interview that coincided with the side’s 25-year-old reunion at Parc y Scarlets a few years ago.

“I think there was a bit of divine intervention helping us as well.

“People talk about 1972 (when Llanelli beat the All Blacks) and you could feel that wall of sound that is unique to occasions like this one.

“Nothing compared to a touring game, a Saturday afternoon match against a formidable Australian team and it felt like the town was wedged into the ground that day.

“Just like the ’72 side, we had gone down to the Ash (Ashburnham Hotel) before the game; Grav (Ray Gravell) was around, Benny (Phil Bennett) as well and of course when you have someone like Gareth who had been part of 72 himself, there was this tidal wave of emotion.

“Ieuan (Evans) tried to make sure that we didn’t get too carried away with the excitement, but you could sense there was something special in the air.

“It’s hard to explain, but it just felt as if we weren’t ever going to lose that match.”

The highlight of the match was a try straight off the training ground which saw international wing Evans scythe open the Wallaby defence to dive over under the posts.

In his autobiography ‘Bread of Heaven’ Evans recalls: “It came from a move which we had pinched from the Aussies and which, out of respect to them, we had christened ‘The Ella’. Their outside half Mark Ella had used it to brilliant effect during the 1984 Grand Slam tour of the British Isles.

“We practised the move until we perfected it and anyone looking deep into our arsenal would know that it was our most lethal strike move. The Wallabies were caught unawares simply because they hadn’t seen us play.”

Evans’s try was decorated by a celebration that will forever be part of Scarlets folklore — the winger and Moon jumping together banging chests in the shadow of the Town End.

Two second-half drop goals from Moon’s half-back partner Colin Stephens sealed the victory, prompting delirious scenes at the final whistle as the fans swept onto the pitch, chairing the skipper to the changing rooms.

You can watch the game on S4C at 6.15pm on Saturday evening.