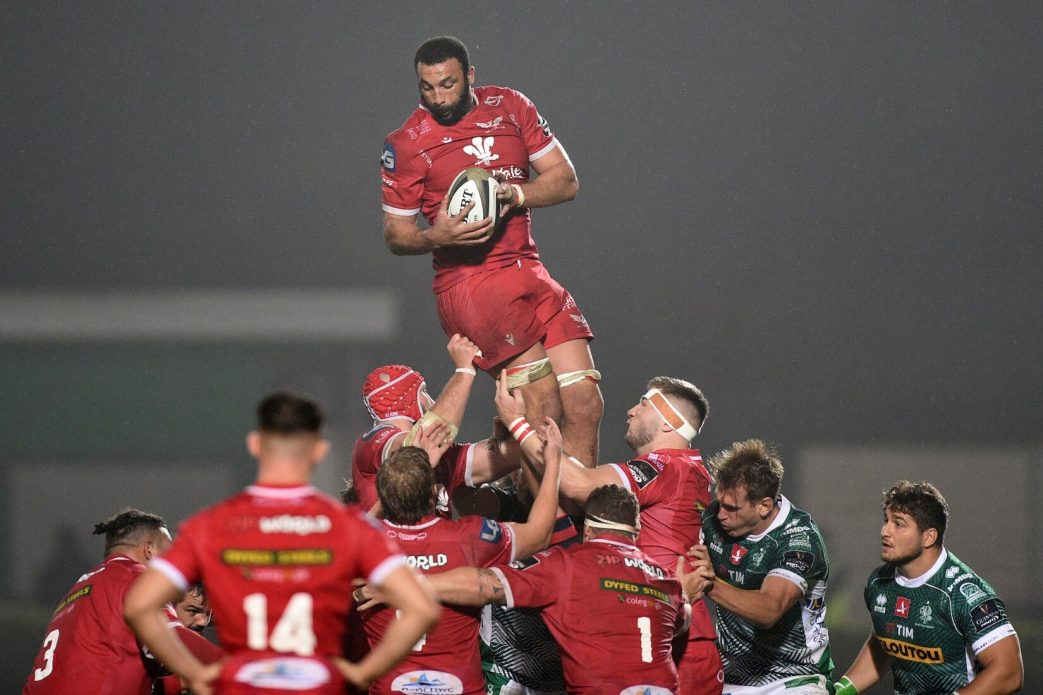 Scarlets had to dig deep in difficult conditions to claim a 10-3 victory over Benetton, their first win of the 2020-21 Guinness PRO14 season.

The history books won’t look at this error-strewn contest as a classic, far from it, but the result at the Stadio Monigo was a crucial one to get the Scarlets’ campaign up and running.

Greasy conditions meant it was never going to be a night for free-flowing rugby with the game developing into a kicking battle between both sides.

And it was the men from West Wales who came out on top, creating the only try of the match, a fine second-half effort for replacement Paul Asquith.

After replacement lock Morgan Jones was red carded for a high tackle seven minutes from time, Scarlets had to withstand a final onslaught from the hosts, but some outstanding defence saw them hold out to claim the spoils.

The Scarlets, without 11 players on Wales duty, started brightly enough and could have opened the scoring inside the opening minutes, but Liam Williams – making his first appearance since re-signing from Saracens – wasn’t able to hold onto the pass.

Benetton grew into the contest as the half wore on and it was former Munster fly-half Ian Keatley who broke the deadlock with a penalty on 20 minutes.

With their scrum in the ascendancy, the Scarlets pack produced an abrasive display up front, but the game struggled for continuity with both sides guilty of coughing up possession.

Keatley hit the upright with another penalty attempt before opposite number Angus O’Brien levelled the scores on the hour mark.

Dane Blacker came close to a score after fine work from Blade Thomson and Steff Evans, but the whitewash was finally crossed 12 minutes from the end.

Man of the match O’Brien hacked upfield and won the race to the ball; when possession was recycled quickly, the ball reached replacement Asquith who combined cleverly with Tyler Morgan to race over. Referee Andrew Brace checked with his TMO for a suspicion of a forward pass, but the score stood.

O’Brien’s conversion extended the lead to 10-3, then came the late drama.

With Benetton throwing everything in desperate search of a game-equalling score, Jones – who had impressed on his PRO14 debut – was dismissed for a dangerous tackle.

However, in the dying minutes the 14-man visitors managed to repel any further threat and were able to kick the ball dead to secure a first win of the campaign.