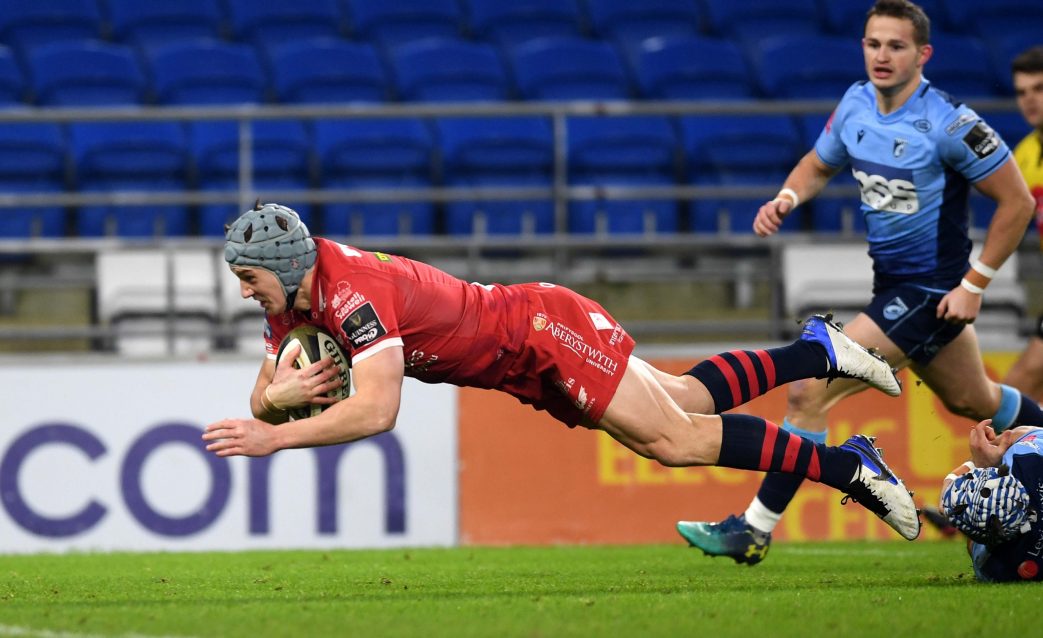 Cardiff Blues prevented the Scarlets celebrating a hat-trick of Welsh derby victories, securing a 29-20 win in a see-sawing contest at the Cardiff City Stadium.

Scarlets were reduced to 14 men just before half-time when wing Liam Williams was dismissed for what the officials deemed an illegal clearout at a ruck.

But they still battled into a 20-18 lead midway through the second half, only for the Blues to finish the stronger.

Both sides went into the match stacked with international talent with the Scarlets able to welcome back Leigh Halfpenny, Liam Williams, Jonathan Davies, Johnny Williams and Gareth Davies to their starting back-line.

It was the home side, though, who took an early lead through the boot of impressive fly-half Jarrod Evans.

The Scarlets responded in determined fashion carving out a well-worked try for skipper Jonathan Davies – his 50th in Scarlets colours.

After setting up an attack inside the home 22, the attack was switched cleverly and fly-half Dan Jones delayed a lovely pass to his centre, who burst through the attempted tackle of Matthew Morgan to cross.

Halfpenny added the conversion, but the home side hit back straight away with Evans setting up a score for centre Willis Halaholo.

After Gareth Davies was shown yellow for a deliberate knock-on, Evans extended the Blues’ lead, only for Jones to land three points with a well-judged kick from long range.

With the Blues half-backs Tomos Williams and Evans causing all sorts of problems, the home side were celebrating a second try four minutes before half-time; Ray Lee-Lo diving over in the corner after Evans had again made the incision.

The home fly-half converted, then moments before the break, Liam Williams was shown red for an incident at a ruck that saw him clash heads with Blues flanker Shane Lewis-Hughes as he attempted to clear out a ruck.

A penalty from Halfpenny reduced the arrears to 18-13 as the Scarlets started the second half strongly. Playing with a real intent and fervour, the visitors pressed for more with a sniping Gareth Davies going close. Pressure was finally turned into points just before the hour mark when No. 8 Sione Kalamafoni burst off the back of a close-range scrum to cross.

Halfpenny’s conversion put the Scarlets in front for the first time as the game remained in the balance, especially with Blues replacement prop Rhys Carre sin-binned for a no-arms tackle.

But back came the Blues. Tomos Williams found space blindside to dart over for his side’s third try then Steff Evans hacked through only for the ball to evade him with the line beckoning.

That was the last chance for the Scarlets.

In the final minutes, with the visitors guilty of conceding a series of penalties, man-of-the-match Evans secured the contest with two more successful kicks at goal.