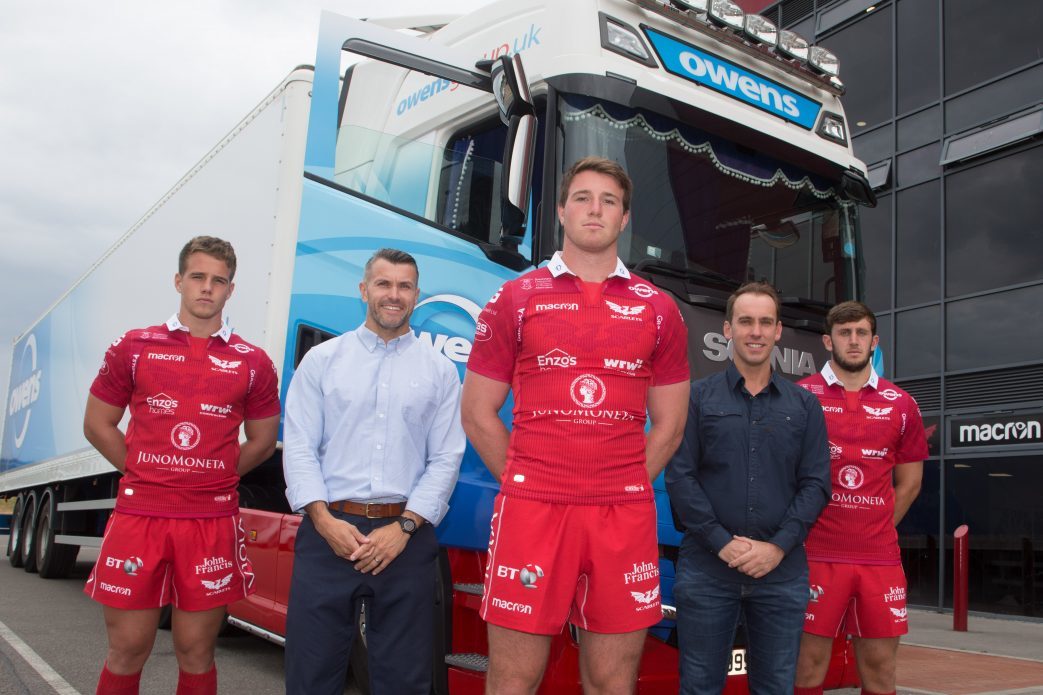 Owens Group, the UK’s leading transport and warehousing company, has signed a lucrative deal with the Scarlets ahead of the 2018-19 season.

The national company, with their headquarters in Llanelli, has been long-standing supporters of the region and the new partnership will see the company logo feature on the left shoulder of both home and away kits.

Since its creation in 1972, by brothers Huw and Eurof Owen, the company has continued to go from strength to strength and now employs over 850 people nationwide, operates over 1,000 vehicles and has a turnover of £60 million.

Officially welcoming Owens Group Nathan Brew, Scarlets Head of Commercial, said; “We are delighted to welcome Huw Owen and David Owen and the entire Owens Group to the Scarlets family.

“Owens is an integral part of the local community here in Llanelli and West Wales, they have been supporters of community rugby for many years and I believe that we share a similar outlook in terms of supporting our wider communities.

“We are extremely proud to be associated with the Owens name and look forward to a successful working partnership with them over the coming seasons.”

Owens Group is passionate about working and living in their local communities; with depots spread across the UK there is an ethos within Owens Group to give back to their communities.

As well as supporting local organisations, charities, local schools, colleges and sporting organisations the company has recently invested in new box trailers, wrapped with the Follow Your Dreams livery, which feature former Scarlets, Wales and British & Irish Lion Mike Phillips. The organisation is one close to their hearts, and the trailers were unveiled at an event raising around £7,000 for the charity.

David Owen, Owens Group UK, said: “Owens Group are proud to be associated with our local region and the world famous Scarlets brand. We are extremely excited to be featured on the Scarlets home and away playing jerseys for the first time in what should be another exciting and successful season for the Region. We look forward to supporting this fantastic squad of players in the upcoming 2018/19 season and we wish everyone at the club the best of luck.”