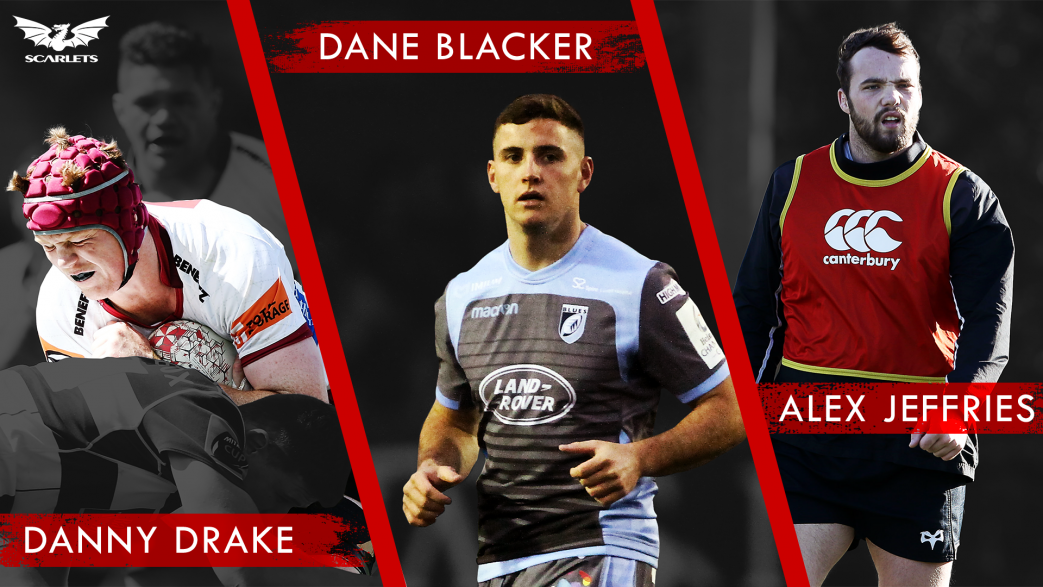 The Scarlets have further strengthened their squad for the 2019-20 campaign with the signings of second row Danny Drake, scrum-half Dane Blacker and prop Alex Jeffries.

The 24-year-old lock has been a member of the development and wider squad at Super Rugby side the Blues.

He is also the current captain of Northcote RFC, who are the reigning North Harbour Club Championship winners.

He said: “I’m really excited to touch down on Welsh soil, fizzing to get stuck into the Scarlets culture and give it my all for the club and its supporters”.

A product of the successful Coleg y Cymoedd, he came through the Academy system at the Arms Park and was capped at Wales U18s and Wales U20s level.

The 20-year-old has played senior rugby for Pontypridd, made his Champions Cup debut as a replacement against Saracens last season and has featured for Wales 7s on the world series circuit.

He has played Guinness PRO14 rugby for the Blues and during a brief loan spell with the Dragons.

Dane will form part of an impressive pool of scrum-halves at Parc y Scarlets, battling it out with Gareth Davies, Kieran Hardy and Jonathan Evans for the No. 9 jersey.

He said: “I am delighted to sign my first professional contract with the Scarlets. It’s an honour to be a part of an exciting club and I am looking forward to the coming season.”

The 24-year-old made his debut for Newport as a teenager and after impressing for the Black and Ambers in the Welsh Premiership, joined the Ospreys in 2016. He is another player who has been capped at Wales U18s and Wales U20s level.

Alex made 18 appearances during his three seasons with the Ospreys, scoring two tries.

He said: “I am really looking forward to the next chapter in my rugby career at the Scarlets. I’m excited to work alongside a talented group of players and coaches and the opportunity to make my own mark at the club. I am also looking forward to developing my game and with the right opportunities showing what I am capable of.”

The signing of the trio comes on the back of a glut of re-signings by the Scarlets.

The Scarlets have also signed second row Sam Lousi from Super Rugby side the Hurricanes.

Scarlets general manager of rugby Jon Daniels said: “Danny, Dane and Alex are talented young players who will be excellent additions to our squad.

“We have worked hard to ensure we have put together a group of players capable of competing for silverware and re-signing players of the calibre of Johnny McNicholl, Jon Davies, Ken Owens, Rob Evans and others have been crucial to that.

“We are happy with the strength of the squad we have put together, but are always open to adding further players if they are the quality and right fit that we are looking for to move the Scarlets forwards.

“We are looking forward to welcoming the boys back for pre-season next week.”