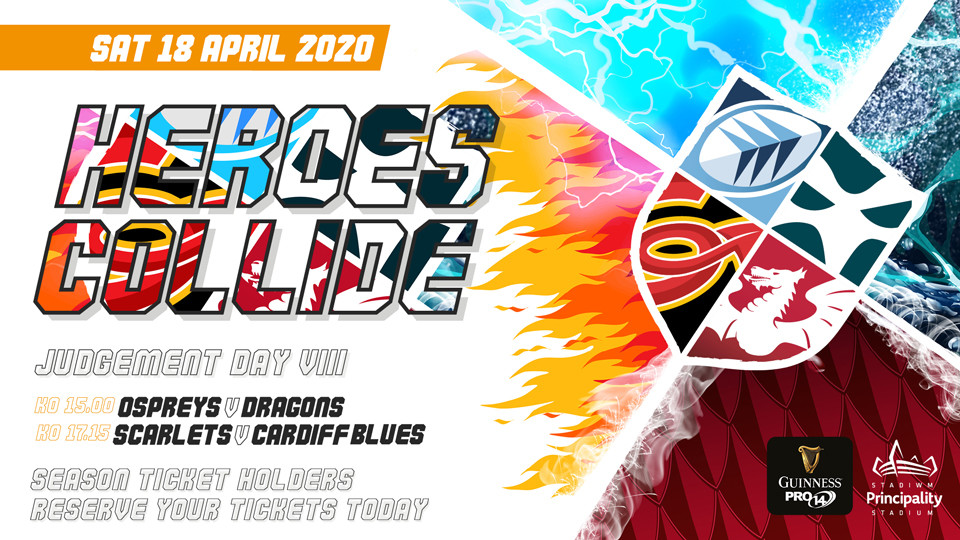 Scarlets will host a Judgement Day match for the first time when they take on Cardiff Blues at the Principality Stadium on Saturday, April 18th.

The match will be the second game of the popular Guinness PRO14 double-header and will kick-off at 5.15pm following the Ospreys’ ‘home’ tie with the Dragons.

With the round 17 match part of the Scarlets season ticket package, season ticket holders can today secure their free tickets to the showpiece event.

The eighth instalment of Judgement Day will see Wales’ Rugby World Cup heroes going head to head in regional colours, and for the first time in the history of the event, the teams from the west will be the hosts.

That means it is an additional home game in the fixture list for the Scarlets; for the fans, they will have first option on the best seats in the stadium, while the players will now move across to the international dressing rooms on the tunnel side of the stadium.

Last year, the Welsh Rugby Union and the four regions moved to secure the future of Judgement Day, agreeing a new partnership until 2022 which ensures all four sides directly benefit financially from the agreement. Previously, only the home teams gained from ticket income.

All four will now play a home game at the Principality Stadium as part of Judgement Day in alternate seasons and 80% of the ticket profits for the event will be split between the two nominated home sides, with the two away teams receiving 20%.

Scarlets season ticket holders gain free entry but they must still reserve their seats, which will be in the Middle and Lower tiers of the stadium.

They can do so by contacting the Scarlets ticket office on 01554 292939 or via their e-Ticketing account. Season ticket holders have until 10am on October 25 before the seats are released for general sale.

Scarlets head of marketing Aadil Mukhtar said: “We are excited by the prospect of hosting Judgement Day for the first time and hope we can get a sea of Scarlet in the stands for what should be a wonderful celebration of Welsh regional rugby.

“With this additional game, our 2019-20 season ticket package provides more value than ever before and we would urge Scarlets fans to reserve their tickets as quickly as possible to make sure they get the best seats in the stadium.”

What you need to know about JD VIII