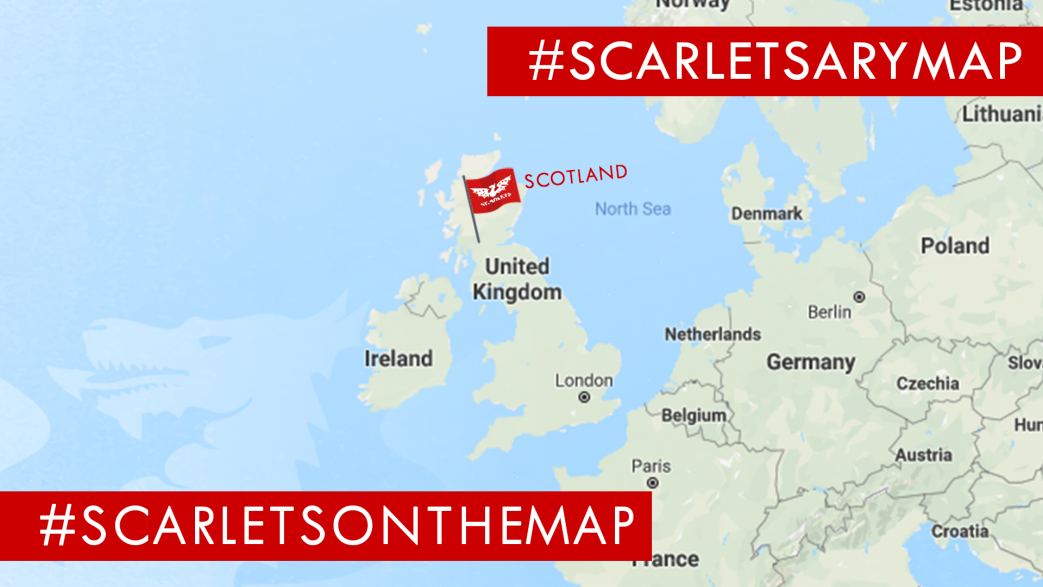 Are you a Scarlets fan Down Under or support the boys Stateside? Get in touch because as part of a new series launched on our social media channels, we are scouring the globe for Scarlets fans far and wide.

#ScarletsOnTheMap is aimed at bringing the Scarlets family together so if you know a Scarlets fan living abroad or are one yourself who travels long distances to games get in touch! We can’t wait to hear from you and hear your story! Share your story here – http://bit.ly/ScarletsMap

We kick-off our series north of the border.

Name: AnneMarie Kennedy (Everyone knows me as Mrs K)

Where in the world do you live?

When did you begin to follow the Scarlets and why?

I’m a Scotland rugby fan so when one of our players, John Barclay, moved to Scarlets I wondered what had attracted him to West Wales. I went on Google and found myself fascinated by the history and traditions of the club. I followed Scarlets on Twitter, met a few Scarlets there and, before I knew it, I was singing Sosban Fach from my seat in the Town End and learning Welsh! I fell in love with the team, the people, the place and Parc y Scarlets just feels like home. I was like a kid at Disneyland on my first visit. I’ve been a season ticket for four years now and, even though I can only get down to Llanelli four or five times a year, I’ll always be a Scarlet.

Who is your favourite player?

All of them. I’m always impressed by how our players represent the club in the community and how kind they are to fans. They are true ambassadors. I don’t have a specific favourite player, but my favourite ever Scarlet is Ray Gravell, obviously. He’s not a former player, but Wayne Pivac is my second favourite Scarlet! I have a soft spot for back rowers; Cubby is a genius and I like what we have seen so far of Blade and Uzair.

What’s been your highlight as a Scarlets fan?

Winning the PRO12 final was one of the best days of my life. Singing Yma o Hyd at the end of that game was special; it rang round the stadium like a hymn around a church. I’m getting goosebumps just thinking about it. La Rochelle at Parc y Scarlets was pretty special too, what an atmosphere! I also loved it when we got “TurnTwitterScarlet” trending and had people like Huw Edwards tweeting it!

What’s the best thing about being a Scarlets fan?

Other Scarlets fans! Being part of the Scarlets family is amazing. I’ve never met kinder, more loving people anywhere. I have made friends for life through my love for this team. It’s an honour to be a Scarlet.