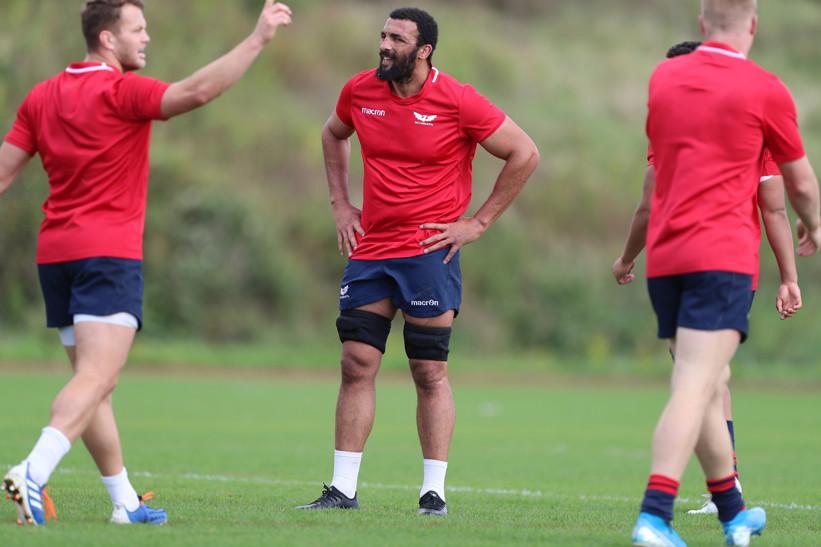 Stats don’t always tell the full story, but it’s hard not to be impressed by the tale of Uzair Cassiem’s opening two matches in a Scarlets jersey this season.

Top of the chart for most carries, second in most tackles made, the 29-year-old No. 8 has also won most line-outs, with the odd steal, turnover and clean break thrown in for good measure.

After an off-season spent recovering from shoulder surgery, the man from South Africa’s Western Cape has hit the ground running.

Now in his second term in Llanelli following his move from the Cheetahs, the eight-times capped Springbok has been a big influence in the Scarlets’ encouraging start to the 2019-20 Guinness PRO14 campaign.

He readily admits his first season in West Wales was a challenge, not helped by injury issues, but the last couple of weeks have already proven that is firmly behind him.

“I don’t want to speak too much about last year, I carried an injury, but I had an op during the off-season and right now I am feeling in great shape,” he said.

“A big thumbs up to the strength and conditioning team for getting me back to full fitness; now it is a case of building game by game and I just want to play and add value to the team.”

Cassiem is certainly doing that, highlighted by his man-of-the-match performance in last weekend’s thrilling 25-21 win over Glasgow Warriors at Scotstoun.

Aggressive with ball in hand, he also put in a big shift in defence – a key area in the Scarlets’ victory north of the border.

“It’s great for the boys to come through a game like that,” he added.

“I thought we showed great character and really dug deep. We knew how tough it is was going to be at Scotstoun and it was fantastic to come away with another win.”

So with two wins from two PRO14 outings, confidence must be high ahead of today’s return to Parc y Scarlets where Zebre lie in wait?

“We are always looking to improve and are looking to take another step forward this weekend, the boys are excited after two wins from two,” added Cassiem.

“Whenever a new coach comes in there are also new things to learn and it was probably a blessing in disguise to have those extra weeks in pre-season. The boys are all keen, they have really bought into everything and there is a great vibe around the place at the moment.

“There is confidence in our gameplan, both in defence and attack, and a real clarity and simplicity about it as well.

“There have been a lot of learnings, but the boys have taken it all on board and onto the field.”

Cassiem last played for the Springboks two years ago – a 24-22 defeat to Wales at the Principality Stadium.

Among the home ranks that day were Hadleigh Parkes, Leigh Halfpenny, Aaron Shingler, Wyn Jones and Rhys Patchell, who could all find themselves meeting the Boks in the latter stages of the World Cup in Japan if results pan out as anticipated.

Cassiem caught a glimpse of his country’s demolition of Canada on Tuesday morning before a team meeting at Parc y Scarlets.

So what are his thoughts on the chances of glory for his countrymen?

“I hope they can go all the way, of course,” he smiled.

“But I have said this all along, it is a really open World Cup.”

And if Wales do face the Boks in the semi-final?

“I’d have to support South Africa don’t I!”