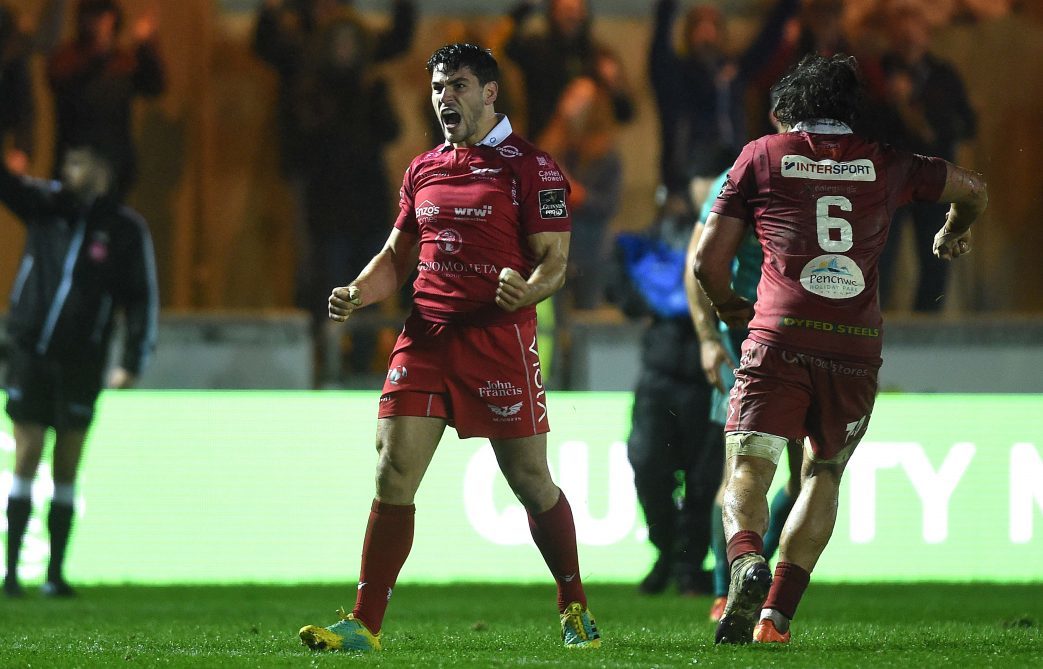 The Scarlets dug deep in an outstanding defensive display to claim a hard-earned 10-6 victory over Munster in a bruising Guinness PRO14 encounter at Parc y Scarlets.

A first-half try from wing Ioan Nicholas and five points from the boot of the impressive Leigh Halfpenny sealed the win against opponents who dominated territory and possession for long periods.

The victory was built on a stubborn defensive effort and outstanding team spirit as the Scarlets kept Munster out time and time again.

No. 8 Uzair Cassiem led the tackle tally with 30, while Josh Macleod and Lewis Rawlins were not far behind.

The two sides were greeted by incessant rain swirling around Parc y Scarlets and it made for testing handling conditions.

It was Munster who opened the scoring with a fifth-minute penalty from fly-half Bill Johnston, but the Scarlets’ response was swift.

Halfpenny, one of five players released from the Wales Six Nations squad, burst out of a couple of tackles to set the home side on their way and after good phase play, a brilliant out-the-back off-load from Johnny McNicholl found fellow winger Nicholas free out wide for the try.

Halfpenny converted, but the rest of the half saw the Scarlets on the back foot.

It needed some superb defensive work to keep Munster at bay as the Irish province hammered away at the home line.

Wyn Jones and Rawlins produced crucial turnovers, but on the stroke of half-time, Johnston reduced the arrears to a point with a well-struck 40-metre penalty from straight in front.

The Scarlets started the second half strongly and went close to their second try following a series of forward surges.

Their reward was a penalty from the boot of Halfpenny, who restored the four-point advantage.

Munster thought they had snatched the lead when lock Jean Kleyn drove over on the hour mark, but after consultation with the television match official, the try was ruled out for obstruction.

After that, it was a case of both sides trying to find a foothold in opposition territory and in a tense finale, the Scarlets were able to hold out for a vital win in the play-off battle.