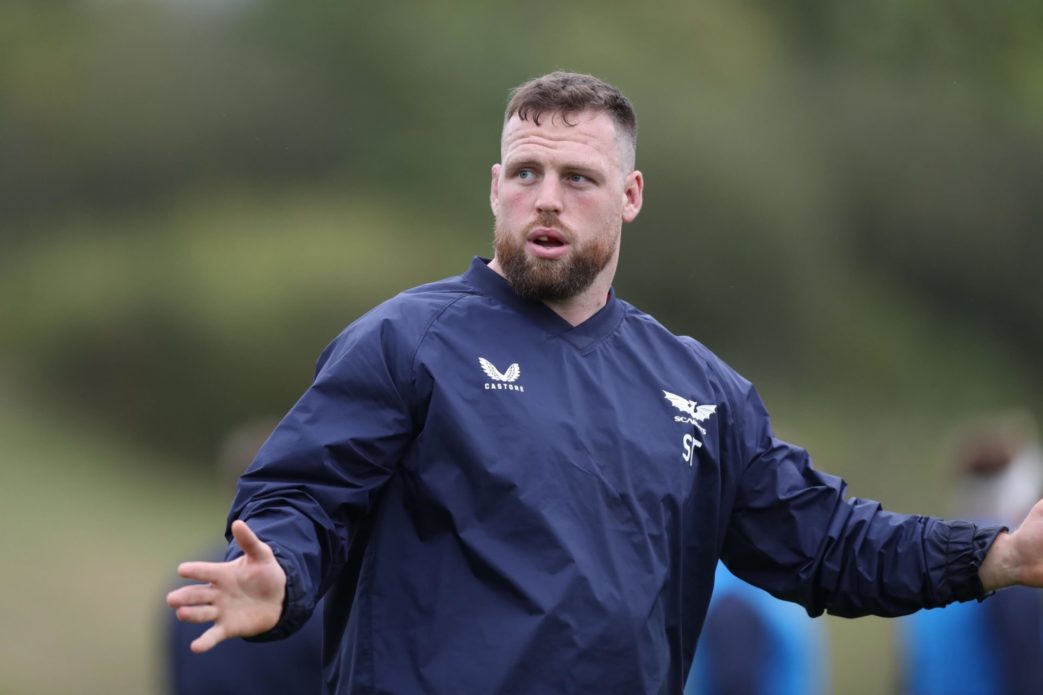 Prop Steff Thomas has paid tribute to former All Black Ben Franks for his development in a Scarlets jersey over the last couple of seasons.

Thomas will be on the bench on Saturday night as the Scarlets seek their first victory of the season at home to bottom club Zebre.

But for the four previous matches so far, the loose-head spot has gone to Thomas.

Wales and British & Irish Lions loose-head Wyn Jones will get his opportunity at Parc y Scarlets on Saturday in a clash between the bottom two clubs in the URC, which is live on S4C.

Against the Ospreys, Ulster, Benetton and Cardiff, however, it was 25-year-old Thomas who was coach Dwayne Peel’s pick for the No.1 shirt.

“If someone had said I would be the starting choice for this many matches so far, I would have bitten their hand off,” says Thomas, a former Wales U20 cap, who happens to be first cousin to Wales and Ospreys prop Gareth Thomas.

“I am happy with the way my own season has started. I have had a lot of game time and I’ve been happy with my performances.

“But overall, it has been a tough start to the season. We have been in all the games without managing to finish things off.”

The former Carmarthen Quins prop believes the behind-the-scenes influence of Scarlets forwards coach Franks – twice a World Cup winner with New Zealand – has been a significant factor in his rise to prominence this season.

“Ben Franks has been massive part of my development and the same goes for all the front rowers,” says Thomas.

“The scrum has gone well this season and that’s down to him. It’s huge to have a double World Cup winner as your coach. When he speaks, everyone listens and he really knows his stuff.

The other factor Thomas says is behind his improvement this campaign is a renewed focus on his fitness – both pre-season training and impromptu workouts on the family farm near Newcastle Emlyn.

Like his teammate and positional rival Jones, Thomas is from farming stock and when he gets an opportunity he will head home to lend a hand and put his 19st frame to good use.

“I am the fittest now I have ever been. But whenever I have time away from rugby, I still help out on the farm and it really helps with my fitness. You can’t beat that kind of manual work for helping your fitness.

“Farming people are used to hard work from a young age. A few of us are also built to be prop forwards, so that helps.

“It also helps that you know how to get by without much rest or sleep when you need to.

“I try to get back there two or three nights a week to help out. If I get a week off, I’ll also go back.”

The Scarlets could do with some collective grunt finally getting them over the line for a first win of the campaign against their Italian visitors.

Apart from the Ulster match, a 55-39 defeat, the scorelines in their three defeats and drawn game have all been tight margins and Thomas insists: “Even the Ulster game, we were six points behind with 10 minutes to go. It was a winnable game and the Ospreys and Cardiff games were definitely winnable.

“Everyone wants to win and it’s on everyone’s mind that we haven’t won a game yet.

“But Zebre are a better team than their results suggest. They have made some good signings. Like us, they have been in games and could have won more so we are not taking them lightly.

“We haven’t had the rub of the green, but there are little things we need to do better. But I feel we are close to winning games and once it clicks, things will improve.”

When they last met back in March, the Scarlets beat Zebre 41-24 and Peel’s under pressure side have never lost to the club from Parma.

But it’s now over six months since the Scarlets last won at home – a 35-20 victory over Cardiff back on April 2 – and Thomas adds: “Things don’t get easier with Connacht away then Leinster at home, so we need to get things moving.”

Live coverage of the URC match between Scarlets and Zebre. English commentary available.