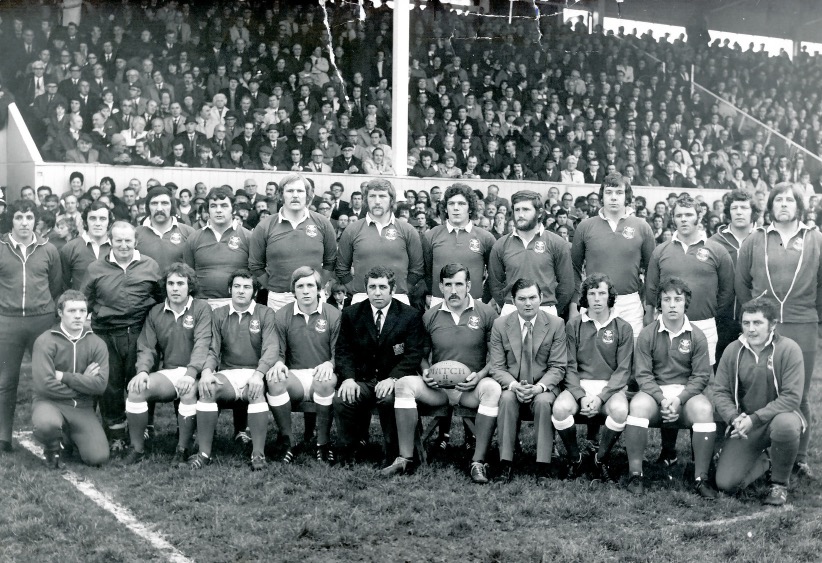 October 31, 1972, a date that has been carved into Welsh rugby folklore and the proud history of Llanelli and Scarlets rugby.

It is now 50 years since that unforgettable afternoon at Stradey Park, when it seemed like the entire town crammed into the famous old ground to witness Llanelli down the mighty All Blacks.

Much has been said and written on many anniversaries since that day, but it’s a tale of the underdog that continues to warm the heart.

As the late, great Phil Bennett said: “I have been on Lions tours, won Grand Slams and Triple Crowns, but this was my finest memory, my little town, Llanelli, beating the great All Blacks.”

Those words have since been echoed by captain Delme Thomas, with the enduring image from that day showing Delme being chaired from the field at the final whistle, rippling arms aloft in triumph.

“It was the proudest day of my life to have led Llanelli to victory over the All Blacks,” says Thomas, who recently celebrated his 80 birthday.

“I even get people coming up to me now in a little caravan down in Amroth where I spend my weekends and they come up and tap me on my back.”

There are many tales from that day, the meticulous planning of coach Carwyn James,  the build-up at the Ashburnham Hotel, the journey to the ground and of course, the aftermath that has been immortalised in verse by Max Boyce – “we all had doctor’s papers and they all said just the same, that we all had Scarlet Fever and we caught it at the game.”

There is also Delme’s pre-match speech that he delivered to the players.

“A lot of young boys, Ray Gravell and Phil Bennett, what a performance they put on the field. So I think what I said went home to them and worked.”

As for the game itself, it was combative, abrasive, unforgiving and the men in Scarlet didn’t take a backward step.

The defining moment? It came early on, a Phil Bennett penalty that struck the crossbar, bounced into the arms of New Zealand scrum-half Lin Colling, whose clearance was then charged down by centre Roy Bergiers. The rest is a moment in time, 20,000 holding a collective breath before Bergiers dives on the loose ball for the score, returning to his feet punching the air in celebration as he hared back to his own half.

“I still get visions of me scoring that try,” says Roy. “I charged it down, the ball happened to be there and I fell on it. It was at the scoreboard end of the ground and it had been arranged for all the schoolboys in the area to sit at that end on planks of wood supported by pop bottle crates.

“A lot of the boys there were pupils from my school, where I had been teaching for about six weeks, so to score in front of them was very special.

“I was running back, thinking ‘What do I do, what is the protocol? Do I jump in the air, do I grab people, what do I do?’

“As time goes by, you think ‘Was that really me?’. To achieve what we did, in front of your home crowd, was absolutely wonderful. It was a lovely feeling.”

A penalty from full-back Joe Karam was all New Zealand had to show from the game, with Llanelli wing Andy Hill securing victory with a penalty success of his own.

Gareth Jenkins went on to coach his beloved Scarlets. At the time he was one of the rookie members of the side, packing down at openside in a back-row that contained Hefin Jenkins and Tommy David.

“It was the most physical game I’ve ever played in – we’d never experienced anything like it as younger players,” Jenkins recalled. “The All Blacks have always been formidable and they were quite formidable that day! The result was ours but it was an experience and a half to have played in such a brutal game and come away with a result.

“I remember the whole town closed for a half-day. The scenes were amazing.

“Everybody who was around the ground arrived on the field at the same time at the end.

“It was chaos. The excitement and shared emotion of everybody was overwhelming and it took me about 10 minutes to get to the changing room.

“You pretty quickly realised it was history-making but had not perhaps realised yet the enormity of what we had achieved. It has to be the greatest moment of my career.”

Gareth, Roy, Delme and Roger Davies were at Friday’s Scarlets-Leinster game where they where warmly welcomed by the crowd. They will also be at a dinner at Parc y Scarlets on Thursday to commemorate another special anniversary milestone.

It will also be a poignant evening remembering the legends who are no longer with us, but one that will be steeped with pride at what those players and the club achieved that day.