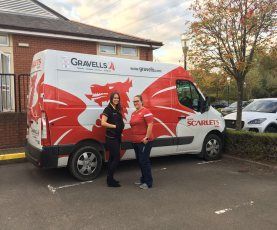 Ahead of Scarlets’ journey to South Africa this week, to take on Southern Kings in Port Elizabeth on Friday evening, we caught up with two people who play a big part in ensuring that the region is travel-ready!

Thomas Cook Sport Account Manager Marie Mort and Scarlets Team Manager Sara Davies get the work done behind the scenes and we caught up with them to find out what it takes to keep the wheels spinning.

Our Head of Strength & Conditioning Huw Davies probably has the most specialist requirements when travelling. Not so much from a personal perspective but he takes care of the playing squad’s recovery and nutritional needs which requires fine attention to detail.

To be fair the players are quite responsible and I haven’t had too many issues with forgotten passports. We’ve only had one incident so far this season where a player had forgotten his passport and his wife managed to catch us up in the bus.

We spend a lot of time together as a squad and having a little bit of mischief is good for keeping moral and spirits high. Rob Evans and Gareth Davies are probably the most prolific mischief-makers whilst a Samson Lee story over breakfast keeps us all entertained!

We have a couple of inseparable pairings; Rob Evans and Josh Macleod, Leigh Halfpenny and Rhys Patchell and Clayton Blommetjies and Uzair Cassiem!

I’m fortunate at the moment that as a squad and management group we’re all happy flyers. The one thing I would say is that trying to fit some of the larger frames in to standard airline seats can be testing and a little snug!

I can’t say I have a good look through players’ bags to know the extent of their toiletry needs however kit manager Wayne James does carry a bag of essentials in case someone forgets something!

Having only joined the Scarlets earlier this summer the only European trip I’ve experienced with the squad to date is Leicester Tigers. As lovely as Leicester is I’d probably not put it up there with one of my favourite destinations however I’m very much looking forward to Paris in the New Year and experiencing Racing 92’s new stadium.