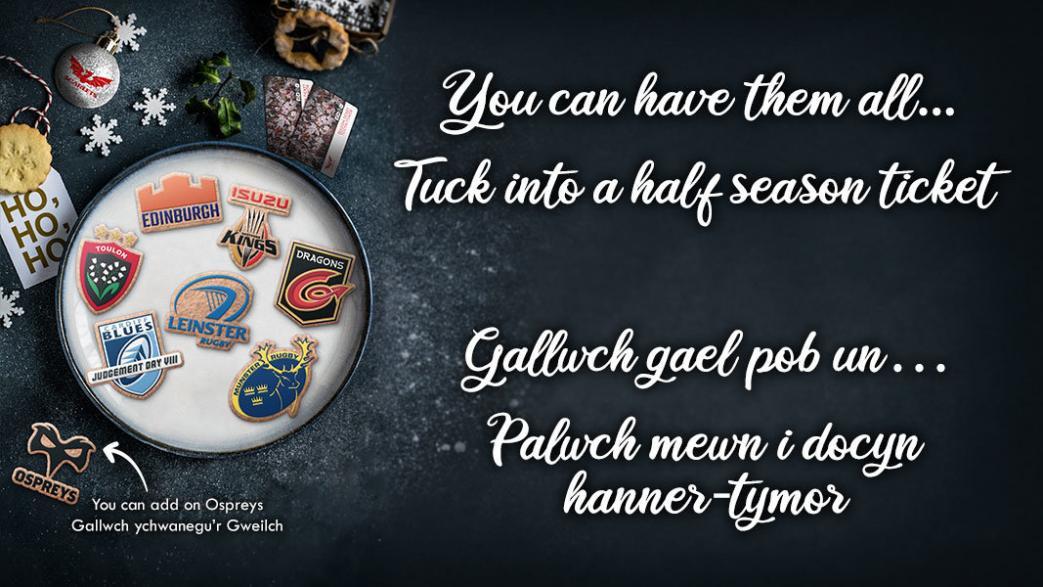 Struggling for a festive gift? Then why not get your family and friends jumping on board and joining the Scarlets exciting 2019-20 journey with a half-season ticket.

It’s been a bright start to the Brad Mooar era with a host of young talent coming through, new signings making their mark and with the World Cup boys coming back into the fold, anticipation is building for a big challenge in the Guinness PRO14 and European Challenge Cup.

As part of the half-season ticket, supporters can enjoy matches at Parc y Scarlets against former Euro kings Toulon, Edinburgh, Isuzu Southern Kings, Dragons, Irish heavyweights Leinster and Munster as well as the Judgement Day date with Cardiff Blues at the Principality Stadium.

Prices for the half-season tickets start at just £99 so fans can cheer on the boys for as little as £14 per game.

As part of the package, there will be an option to buy a sought-after seat at the Boxing Day derby against the Ospreys at a reduced, early-bird price as a special add-on. Phone the ticket office on 01554 292939 for the full details of the Ospreys add-on offer.

After the festive get-together with our ‘nearest and dearest’, Toulon roll into town on January 11 for what promises to be another epic encounter. The Scarlets narrowly missed out on a famous win in the south of France in the European Challenge Cup and will be thirsty for revenge. If the match is anything like the two previous encounters between the sides in Llanelli, it is one not to be missed.

After that Toulon tie, it’s a return to the PRO14 and a pivotal match with Conference B rivals Edinburgh and that match is followed by the arrival of the Kings, a game that guarantees plenty of tries.

The Dragons are in Llanelli in March, then the Championship campaign reaches a crescendo with a big day out in Cardiff at the Principality Stadium for Judgement Day VIII and two mouthwatering clashes with the big Irish provinces Leinster and Munster in May.

As well as some superb rugby on offer, the season ticket offer also gives you access to all our fantastic benefits as well as numerous perks from our commercial partners, worth more than £500 in total.

And that means, 10% off Scarlets merchandise in the Macron Shop – perfect timing for that last-minute Christmas shopping.

Half-season tickets are on sale now so don’t miss out on this tasty Christmas treat and look forward to what could be a prosperous new year with the Scarlets.