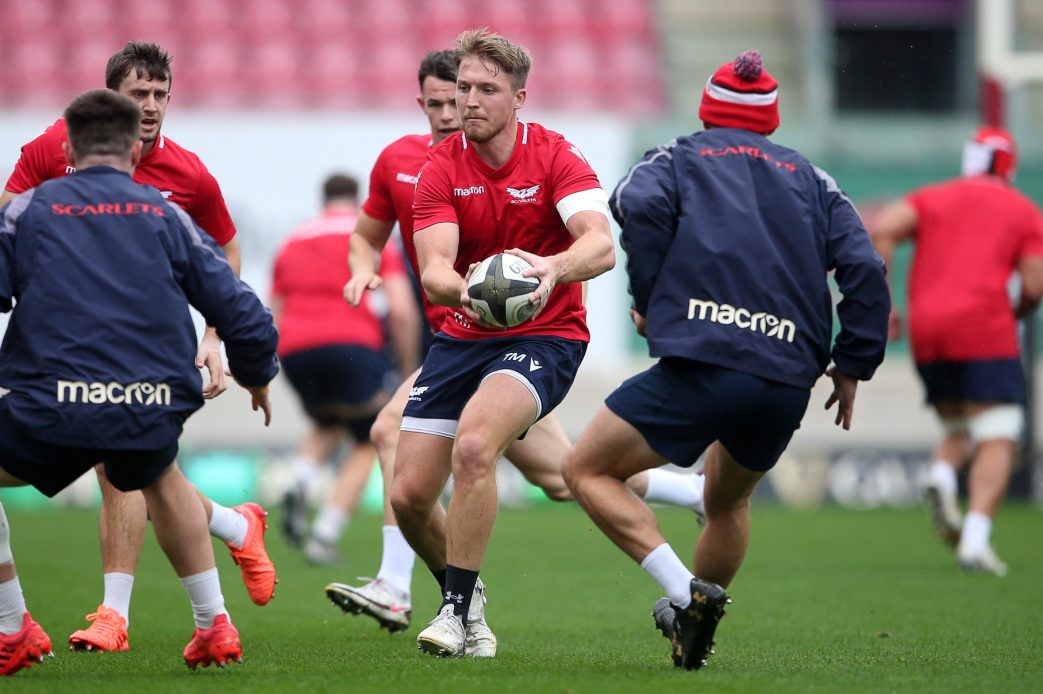 Tyler Morgan will make his first Guinness PRO14 start for the Scarlets against Benetton on Friday night.

The Wales international centre spoke to the media this week ahead of the clash at the Stadio Monigo.

How much are you looking forward to this first PRO14 start in the No. 13 jersey?

TM: “I’m really excited. I knew I was coming here with a lot of competition, there is a lot of strength at centre here and I kind of accepted that I wasn’t going to be starting straight away, especially with Foxy here, but that is one of the reasons I came, I can learn so much off him. The squad was built here before I came and you respect that. You have got to be settled in and prove you should be in the shirt, whether that takes a lot of appearances off the bench or to start when they (the international players) are away. Obviously, with Foxy and Johnny called up by Wales I get my chance and I am really excited to get out there with the boys on Friday night.”

How crucial is this international window for the Scarlets?

TM: “Obviously quite a few boys have gone with Wales and the environment does change, you do notice that. But a certain excitement starts to build, everybody knows they now have a chance to prove what they can do. There are a lot of Welsh squad players here, when the opportunities do come you see a lot of excitement around the place.”

So what were your reasons for the move west?

TM: “In myself I needed something fresh, a new challenge mentally. I was hoping coming here would give me a fresh start and  I think it has, it has given me a different outlook to rugby.”

You are still only 25, what are your ambitions?

TM: “I have come here just willing to learn. I want to cement my place in the team, whether that takes time I am not too fussed, I know the squad they have here is outstanding. The team goals here I have noticed are really driven. Instead of individual work-ons, it is all about the team; you are working on the things you need to be better to make the team better, that mentality is something new to me. Obviously, international rugby is the end goal, one of the reasons why I came here, to get better again. I’m around the Welsh boys here and I want to get back to the squad eventually, but I’m just taking my time.”

What about your midfield partnership with Steff Hughes?

TM: “I played with Steff at Under-20’s. He was in the centre and I was on the wing so we’ve had quite a lot of experience together. He’s stepped into a leadership role here and is a great ball player. Hopefully it goes well and I think it will.”